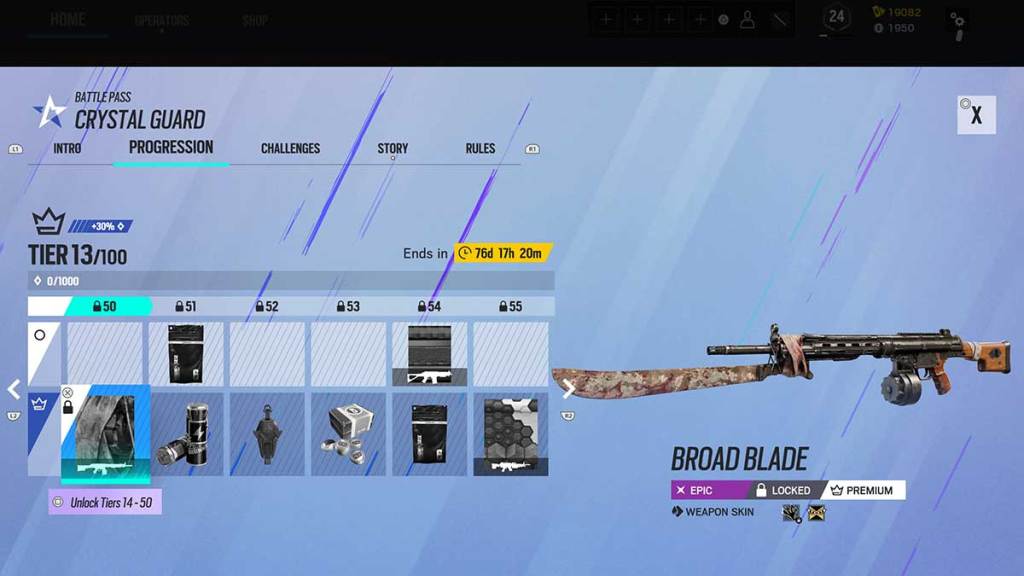 Rainbow Six Siege Operation Crystal Guard is now live, bringing a new Operator, balance and map changes, and a new battle pass to work through. We’ve taken a look through every entry and have put together this list of the best rewards you can earn this season.

This first entry is a new outfit for Ace. It makes him look a bit like a mean biker that’s just rocked up to ruin your day. You can get pretty close to unlocking this tier if you purchase the battle pass bundle for a little more Renown this season.

With this helmet, you can make Fuze look like the Doom Slayer and strike fear into the hearts of your enemies. It’s probably the best helmet in this battle pass, and you only need to make your way just over a quarter of the way through to get it.

This is definitely the best outfit you can unlock for Osa this season. It’s almost obligatory since you’ll be playing as her each time you’re on the Attacking team. We like the chequered pattern of red and black across the top. It makes her look like she’s wearing a futuristic battle suit.

We haven’t seen a better weapon skin than this in the battle pass. It’s a huge machete on the end of a rifle, leaving very little not to like. There’s even some rust and blood all over it.

This helmet comes late in the battle pass, but it’s worth chasing. It makes Pulse look like he’s wearing his gadget on his face. As if he’s able to detect your heartbeat through any wall and see the blood circulating in your body. It’s got a very strong Total Recall vibe to it.

This is the best headgear we’ve seen for Aruni in a long time. It gives her an earpiece that slips back down her neck like some sort of advanced implant. It’s very reminiscent of technology you might see in Dune, the kind of advanced machinery that gives you the ultimate edge in battle.

This is Wamai’s best uniform, without a doubt. It’s got the same look as Osa’s R&D outfit above, but it’s been designed to suit Wamai down to the ground. It’s very understated, meaning that he can still hide beneath the surface of the water without being detected.

Kali’s new headgear looks like it belongs to Big Boss. You can imagine her augmenting all sorts of overlays on what she sees to inform the team of various tactical advantages that can be achieved by taking new routes or shooting in certain directions.

Our final entry comes right at the end of the battle pass. It’s a new weapon skin based on the designs that Osa has been putting together for the team. It’s brilliant, sleek, and looks incredibly lethal. This is worth all the effort you’ll need to put in this season.