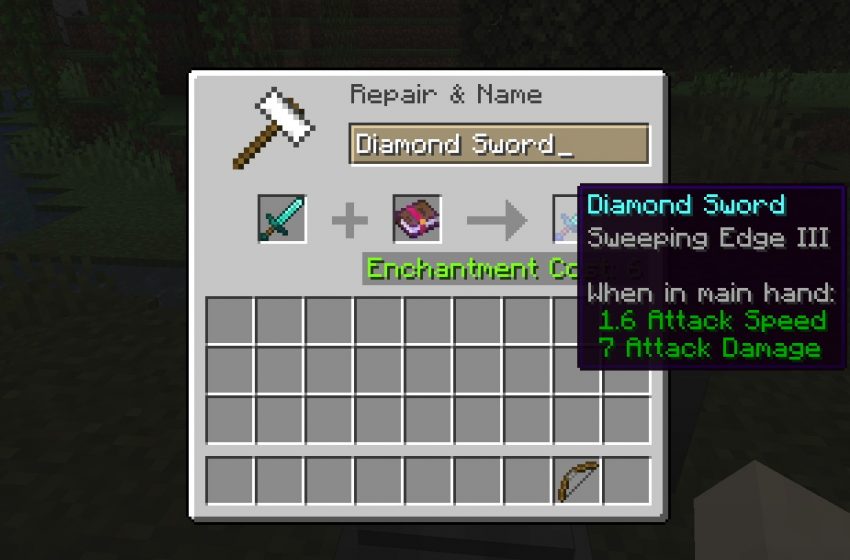 Minecraft has a rich diversity of combat, armor, and tool upgrades, ranging from a waste of time to nearly game-breaking in power. It can be hard to decide which ones to use after spending all that time grinding for levels to get enough experience to afford the higher-level enchantments. For the indecisive Minecraft players, the enchantments below are always worth your time.

Mending is easily one of the most powerful enchantments in the game, and it’s essential to add to any of your tools, armor pieces, and weapons. It slowly repairs your items every time you gain experience at a rate of two durability-per-experience bubbles. If you have more than one item with mending in your inventory, one receives the upgrade, not both.

mending is a “treasure enchantment.” All that means is that you can’t obtain this particular enchantment via the enchanting table. You can find it or buy it in many different ways—including chest loot, fishing, Pillager raids, and trading with villagers.

One thing to note about mending: if your bow already has the infinity enchantment, you won’t be able to apply mending to it. The two are mutually exclusive for a good reason. If you had a bow that could shoot infinitely and also never break? Man, game over.

The highest level of unbreaking is worth all the grinding for experience. If you want your armor, weapons, and tools to last a long time, slap an unbreaking enchantment on that sucker. This enchantment gives your items a chance to completely ignore durability reduction every time you use them, dependent on the level of the spell. If you want that diamond pickaxe to last through your strip-mining escapade, having unbreaking III is one of the best deals you’ll get.

Exclusive to pickaxes, shovels, and regular axes, fortune III is how you get the best bang for your buck when you’ve got that next big project ahead of you that needs so much coal.

Another high-tier enchantment, fortune works on coal, diamond, emerald, Nether quartz, redstone, glowstone, and lapis lazuli in terms of ore, and carrots, sea lanterns, melon slices, Nether wart, potatoes, beetroot seeds, wheat seeds, and seeds from tall grass in terms of food and other plant-related items. It also increases the probability of gravel dropping flint, saplings, and apples dropping from oak and dark oak leaves. You will soon be rolling in the amount of stuff you drop.

Fortune, however, is similar to mending in that it’s incompatible with another enchantment. This time, it’s a silk touch. This one makes sense, too—the game can’t expect you to be mining diamond ore with silk touch and expecting more diamonds from fortune. The good idea is to have one pickaxe with fortune and one with silk touch if you need them both.

Protection IV is the highest-level enchantment within the tier system, it absorbs 16 percent of all damage you take—per item on your helmet, turtle shell, chest plate, leggings, and boots. The absorption caps out at 80 percent, though, so you won’t ever be completely invulnerable. Just close.

Good at combat? Love to kill things? Wish your sword could kill more things at once? Look no further than sweeping edge III for all your mob-murdering desires.

The sweeping edge III enchantment is an

Exclusive to the sword, sweeping edge’s highest-tier enchantment adds an extra 75 percent of damage every time you hit a sweep attack on something, and it stacks with other damage-increasing enchantments like sharpness, smite, and bane of arthropods. It’s great for crowded fights in the Nether, taking out a bunch of monsters in your grinding zone, or culling an excessive number of cows on your farm.

The infinity enchantment is pretty self-explanatory. As long as you have at least one arrow in your inventory, the enchantment lets your bow fire an infinite amount of them. It does exclude tipped and spectral arrows, but it’s not a bad deal at all.

Like mentioned before, this enchantment is mutually exclusive with mending, but it does have a different tradeoff: you can’t pick your arrows back up after you fire them. It would be far too easy to have infinite arrows differently if that wasn’t the case.

Perfect for that snowy fortress made of ice you’ve meant to build, or if you’re just really tired of smelting cobblestone down to regular stone again, silk touch is an excellent enchantment for builders. It lets you pick up blocks you’d never otherwise be able to retrieve—or at least not without some struggle—and allows for a certain kind of creativity.

This enchantment goes to the pickaxe, which is a good choice, but don’t shy away from enchanting a shovel or a regular ax as well because they prove just as useful.

Of course, there are caveats outside of being mutually exclusive to fortune. Most food blocks—like cake, beetroots, carrots, and the like—will be picked up like normal, as well as fire, monster spawners, monster egg blocks, and gravel still has a chance only to drop flint with silk touched shovel.

Following the aquatic update, tridents are a handy weapon with an incredibly cool enchantment to go with them: riptide III. It allows you to soar through the rain merrily like a flying fish, move you like a dolphin through bodies of water, and jump out of the water like a humpback whale. If you happen to collide with an enemy on your way, the trident deals damage as if you’d chucked it at them. Except it’s your whole body. Sweet.

Unfortunately, snow does not count as rain, so don’t try to jump off a snowy mountain with your riptide trident unless you’ve got a good plan. It’s also mutually exclusive with the two other trident-exclusive enchantments, channeling, and loyalty, but that’s a fair trade.

Like Fortune, but for mobs, looting III is a decent enough enchantment if you’re doing some serious grinding for materials. Sometimes you want to get into the Nether, get your blaze rods, and get out.

Looting III, the highest tier looting enchantment and exclusive to swords, practically guarantees you frequent everyday drops, bumps up the chance of rare drops to 5.5 percent, and bumps up the possibility of equipment drops by 11.5 percent. It’s not mutually exclusive with any other enchantments, so feel free to go nuts with this one.

It’s useful to note that the looting effect applies as long as you’re holding the enchanted sword in your hand, even if you didn’t kill the mob with the sword. So if you fire an arrow at a zombie and quickly switch to your enchanted sword before the arrow kills it? Looting applies to that.

This one’s also pretty self-explanatory as long as you know what the word “respiration” means. A helmet- and turtle shell-exclusive enchantment, respiration III helps you breathe underwater.

At level three, the highest tier, respiration adds 45 extra seconds of breathing time onto the base fifteen second time limit without it. It also gives you a chance not to take any drowning damage if and when you do run out of air. This enchantment is perfect for exploring wrecked ships that aren’t quite deep enough to be worth a potion of water breathing, or if your next project involves a lot of clay.