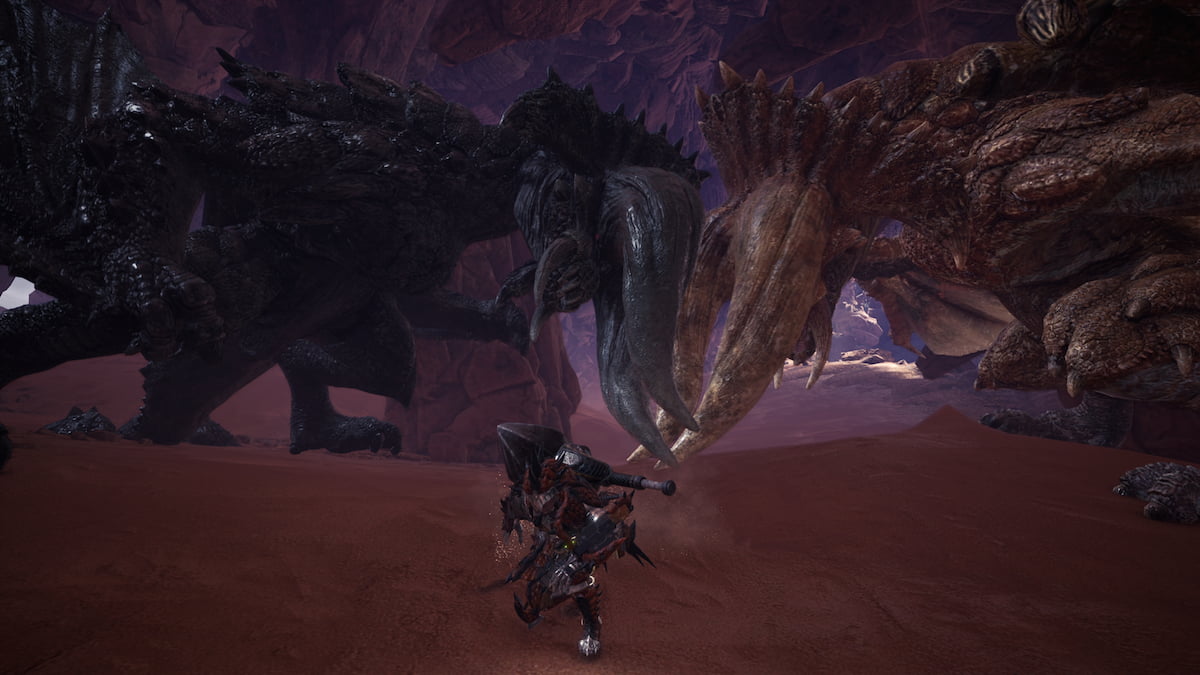 With Monster Hunter: World available on PC, Monster Hunter fans have the opportunity to mod certain parts of the game to enhance their hunting adventure. There are multiple mods to pick from, and it can be difficult to figure out which ones you should add to your collection. Below, we’ll cover the 10 best Monster Hunter: Worlds mods you should download to aid in you while hunting these massive creatures ranked in our order of preference.

Related: Will there be a Monster Hunter World 2? Answered

This mod has become the most popular for the game, and for a good reason. It can be a royal pain to find item drops in certain areas. This mod causes every item to emit a tall, thin, and bright light beam, making it easier to spot—the color of the light changes depending on the drop type. For example, yellow light is for bandit mantle items, red for slinger ammo, and green for monster drops. This may seem like a pretty simple mod, but it makes gathering slips much easier. The light beam also looks very similar to the effects used in other JRPGs, so it integrates easily into the game.

If you spend a lot of time melding, this mod is perfect for you. It displays a number beside the name of the decoration materials at the Elder Melder. This number indicates how many you can equip to get maximum effect and how many you should keep when melding. This is very straightforward but takes out a lot of guesswork when combining, so you don’t accidentally waste resources.

There are a lot of mods like this one available, and all of them are great, so it wasn’t easy to pick just one. The intelligent hunter overlay is one of the most popular and most endorsed out of all of them. This mod adds elements to your HUD that show monster health, parts health, status effects, crown, team damage, player buffs, and other beneficial information. This overlay is also skinnable, so you can find skins for the new HUD elements or create your own. You can also change the size of the widgets or move them to where you want them to appear on the screen.

This mod is very straightforward but makes planning for a hunt easier, especially if you have difficulty remembering a particular monster’s weaknesses. It adds a small icon to monster portraits that indicate the monster’s weakness. This icon can be seen in the quest, research, and investigations menus. This makes it easy for you and your team to equip the appropriate gear.

This is purely a cosmetic mod. It places the textures of specific resources, bone, and crystal, to make them more bright and vivid. The resources are a little bit easier to spot when exploring an area. The vivid colors also a friendly yet discreet splash of life to some of the game’s scenery.

This one was made purely for convenience. It can be a pain when you are in the gathering hub with a group to keep having to leave and return to visit certain NPCs like the Smithy. The mod adds all the essential NPCs to the gathering hub, so you don’t have to go to the area to pick up investigations or gather rewards from your tail rider safari.

We said in the beginning that we weren’t going to include mods that are a bit cheaty, but for some of us, this mod is necessary for keeping our sanity. The mod adjusts the drop rate for decorations, so the more sought-after jewels drop more often, and the next-to-useless ones fall less often. We no longer have to farm for hundreds of hours to end up with one lonely force-shot jewel we weren’t even looking for.

This mod would be a lot of fun if you enjoyed any special arena quests. As the name suggests, it makes all of the particular arena quests, like Special Arena: MR Tigrex, permanently available to be replayed. If you have a search that you particularly struggled with, this mod lets you come back a bit later with better gear to get some satisfaction.

MHW is a beautiful game, but the default shaders can look a bit bleached. This mod fixes that problem by removing the effect and adding more color to the game. When this mod is installed, the game looks less washed out and a bit more realistic, better highlighting the hard work the developers put into crafting the world.

This mod could be a bit cheaty, but it is necessary to prevent rage quits. The mod increases the spawn rate for rare endemic creatures without altering conditional restrictions like weather and time of day. This means you no longer have to spend hundreds of hours trying to catch a Downy Crake just to get interrupted by a grumpy Anjanath and start over. With this mod installed, you still risk being interrupted, but it will not take nearly as long for rare creatures to spawn again.