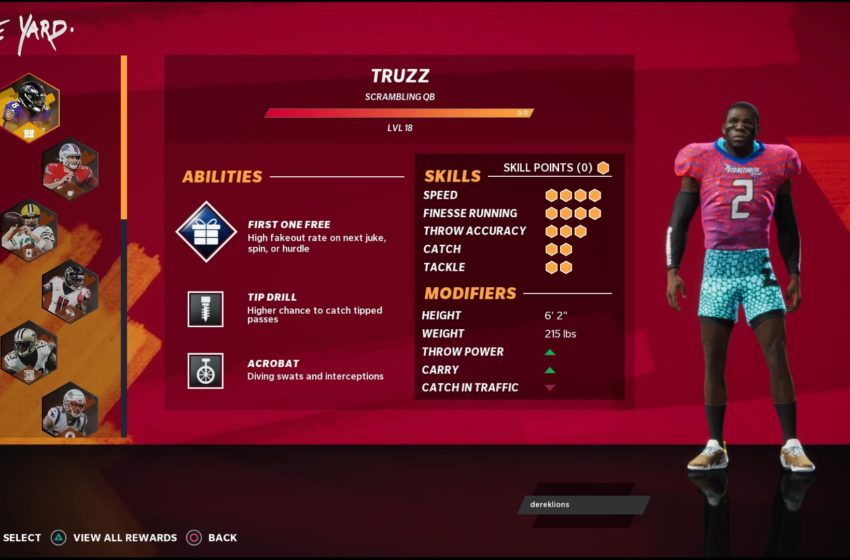 By far, the biggest decision you will have to make in Madden 21 is choosing which prototype to follow for your created player in The Yard. These prototypes work as skill trees, and if you can max them out, your own star will begin to play like other future Hall of Famers. But, that isn’t why it’s so impactful. With each set of challenges, you’ll be drafting around this one player’s prototype. With challenges that end up being some of the hardest in the game, you have to pick wisely, or forever lose in games that offer major rewards.

It’s the first option you’ll see and likely the most enticing one. Truzz makes your created player the star of the show, as its speed proves to be a massive upside during this fast gameplay experience. Its primary ability is “First One Free,” where he’ll be granted a high fakeout rate during the first juke. Speed and finesse running can both be maxed out once filling four skill slots, while accuracy isn’t too far behind with three slots.

Honestly, there couldn’t be a better name for this sort of superstar. It’s ability, “Rac ‘Em Up” lets you win RAC catches versus single coverage – a popular choice among defensive players. It only makes your opponent even more nervous when you fully upgrade the five wide receiver release skill slots. If you’re one to use receivers as running backs, Raczilla offers four upgradable slots in power running, meaning your jukes will be very deceiving.

The Bobby Wagner-inspired skill tree has the capability to balance all major stats on your character. Hit power, press, and coverage skills all have three point slots, with speed having four in total. “Zone Hawk” is its main ability, and its debatably the best, with a high-rate chance of interceptions in zone coverage. On offense, we advise you use this prototype for a slot-receiver, a position known for those able to complete short catches with the speed to take-off after.

This prototype isn’t exactly our ideal favorite. It focuses on making your character the best possession receiver in the game, and its not that big of a sell. However, if you struggle with pulling off trick plays, this proves beneficial to those who just want to hurl up Hail Marys. If you don’t think that it will be fruitful, its main ability, “Maximum Security,” outright states you’ll get a high success rate of catches with your player.

Jacked Up’s build is almost exactly the same as The Blanket, but its skill tree leans more on defensive skills. It, too, has “Zone Hawk,” but instead of an emphasis on speed, there are four skill slots for tackling. Obviously, as the Jamal Adams-based prototype, you’ll want to use this for safeties. Though, we can imagine some really cool running plays come out from this kind of character, on the offensive end.

You would think we wouldn’t have to state this, but we can’t count how many people we’ve beaten due to them using this prototype terribly wrong. For those using this build while having a character under six feet, we send our condolences. As its made for linebackers, the prototype ditches all speed for strength in tackling. Thus, if you’re something like 5’10, the build is ultimately ineffective, as others will stomp on you. We believe this is the best defensive build because you’ll have access to a surprisingly five skill slots for both blocking and hit power.

Something that may also affect your decision in which to choose is the rules you are playing with. With each location comes a different set of rules that dramatically changes play-calling habits. In addition, you can also always invite friends that may harbor a prototype that works well with your own.