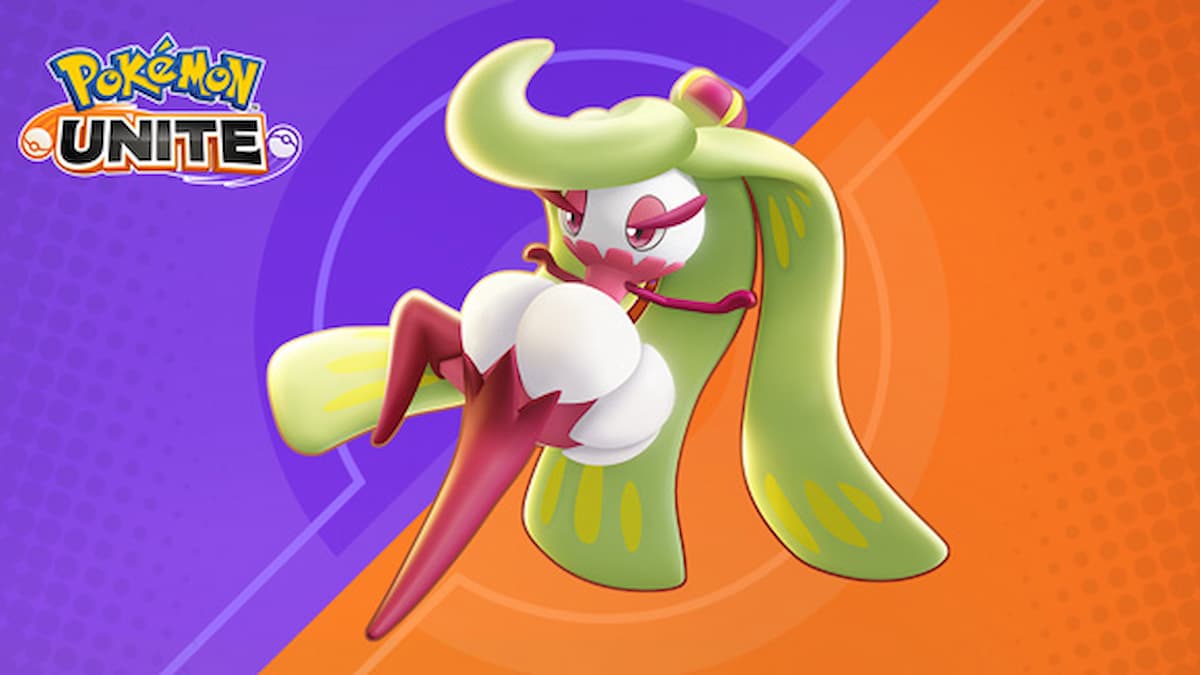 After Pokémon Unite was down to prepare for December’s update, all players were greeted with a nice present: the addition of Tsareena to everyone’s roster for free. It quickly became apparent that Tsareena is one of the most powerful Pokémon in the game. Her versatility as an All-Rounder can turn her into a truly threatening foe — especially if you know your way about her moves.

In the pre-match screen, dibs the middle: you’ll evolve quickly and become an early bedrock for your team. You start as the unassuming Bounsweet. Choose Razor Leaf as your first attack — it shoots a stream of leaves in your designated direction. Its high critical hit rate helps for gaining those initial XP. At Level 3, Bounsweet can learn Rapid Spin, which sends it hurling off in a direction as it deals damage to opposing Pokémon. If the attack hits, Bounsweet’s movement speed will temporarily increase.

Bounsweet evolves into Steenee at Level 4. At Level 5, Steenee can learn Triple Axel or Stomp. While Stomp’s ability to stun Pokémon is useful, we recommend Triple Axel. Triple Axel is a highly versatile move that allows Steenee to dash forward while kicking in three-wide circles. Each kick offers less damage than the previous, but a well-timed Triple Axel can hit a cluster of Pokémon multiple times, making it potentially devastating. Additionally, if Steenee lands a kick, its attack speed will increase. The more kicks Steenee lands, the longer the buff lasts.

At Level 6, Steenee will evolve into Tsareena, and you’ll get the opportunity to learn Trop Kick or Grassy Glide. Both are strong moves, and which one you choose may have to do with your play style and experience. Trop Kick is more straightforward to perform, yet its effects are far-reaching. Tsareena performs a flying kick, which will decrease opposing Pokémons’ attack for a short period. Pokémon lingering where the kick landed will be dealt damage and have their movement speed slowed.

Grassy Glide sends Tsareena forward to kick. She’ll then turn around, move back a bit, and kick again. The first kick decreases the opposing Pokémon’s movement speed, and the secondary attack can act as a shove. Anyone wanting to use a dash attack to propel themselves forward should take note of Grassy Glide’s 180 turn.

When Steenee evolves into Tsareena, the Pokémon’s ability will change from Oblivious to Queenly Majesty. Both abilities shorten the length of hindrances. But with Queenly Majesty, you’ll see a blue gauge appear atop Tsareena. This gauge will go up as you perform attack combos and as you make use of Tsareena’s Standard Attack, which makes every third attack become boosted. Use three boosted attacks in combination, and the fourth will deliver an additional buff. For Triple Axel and Stomp, the buff will be HP restoration. For Trop Kick and Grassy Glide, Tsareena will be granted a shield.

Tsareena will learn her Unite Move, Queen Ascendant, at Level 9. Tsareena will launch towards a poor Pokémon, leap into the air with it, and deliver a startling amount of tiny-yet-potent kicks. What’s more, Tsareena recovers HP when she returns to the ground.

The Razor Claw is perhaps one of the best items for Tsareena: it increases her critical-hit rate and attack stat, and since Tsareena is a melee fighter, it includes the additional buff of decreasing opposing Pokémon’s speed. Additionally, it rewards combos by allowing Tsareena’s next basic attack to deal more damage after a hit, which pairs nicely with Queenly Majesty.

Players can either double-down on Basic Attacks with the Muscle Band, or amplify the potency of Tsareena’s special attacks with the Wise Glasses. The third item should be something to stabilize Tsareena’s HP, such as the Focus Band, Score Shield (which counterbalances Tsareena’s low scoring stat), or Buddy Barrier.

For your held item, the Eject Button is useful for preserving Tsareena’s HP and amplifying the ability of her dash attacks to get her out of a pinch. However, X Attack is also a great choice for those looking to focus on Tsareena’s fighting abilities.