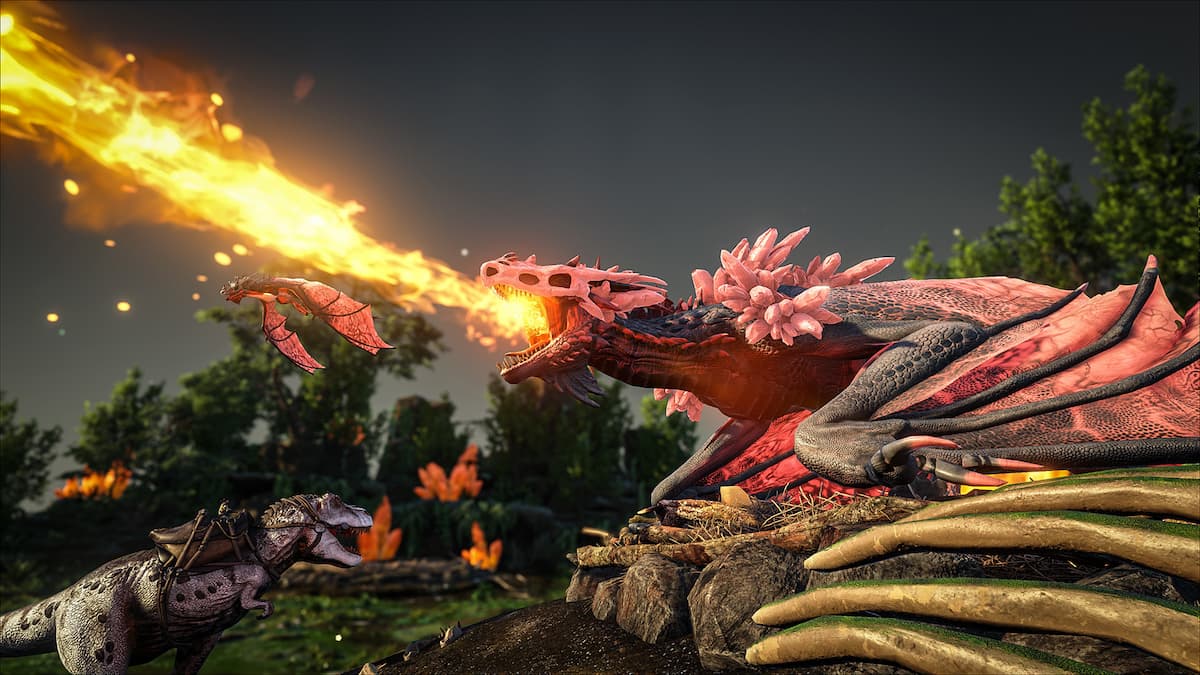 There are several types of wyvern you can encounter in Ark: Survival Evolved. These creatures are massive beasts, capable of defending their territory from any trespasser who dares to cross their path. They’re also exceptional allies and can become a worthy pet if you’re willing to go through the dangers of attempting to capture one. The only way to tame wyvern is to find one of their fertilized eggs, so don’t try to knock out and tame one of the parents. There are several types of wyvern in Ark, and each of them come with a variety of special abilities that make them unique.

Crystal wyvern are some of the most recent variety added to the game. There are three types of crystal wyvern, with a notable favorite being the blood crystal wyvern. It’s capable of damaging enemies using its ranged blood stream that siphons health from the targets it hits, healing itself. After you’ve defeated an enemy, the Blood Crystal wyvern can consume the corpse of the creature it’s just defeated for another health boost. Defeating this wyvern can be exceptionally difficult, and if you build your Blood Crystal wyvern defensively, you’ll be a challenging opponent to defeat.

The Fire wyvern can deal a good chunk of damage against most opponents. This variation of a wyvern is a good middle-ground for nearly everything in terms of stats. It does some great melee damage, but there are some better choices. It can fire excellent breath attacks, but it’s beaten by the lightning wyvern when it comes to raw damage. It can fly and turn pretty quickly, but there are superior options. If you want an all-rounder wyvern, the Fire wyvern is an ideal choice that serves the best generalist players who fly around on an immense creature and be feared by any opponent who looks up into the sky.

The Lightning wyvern is capable of dishing out the highest amount of damage of all the choices. Of all the wyvern varieties, the Lighting type has the best flat damage with its lightning strike attacks. You’ll be able to challenge the fearsome titans and the other bosses. These creatures use quite a bit of stamina to use their attack. You’ll want to dedicate as many points as possible to increase their stamina stat, followed by their melee damage and weight if you plan to use them for PvP encounters.

The Poison wyvern can do a mountain of damage with its poison breath, fatiguing an opponent. If you plan enough, whenever the poison wyvern fires out a breath of noxious gas, you can light it on fire, causing even more destruction against your opponents during a battle. For those who prefer to do damage over time effects to players in PvP encounters, you’ll be able to fire your attacks over and over again, with your stamina barely moving at all. The poison damage can also ignore armor, but you’ll need to make sure you have some of the best aim to use it. If you prefer to focus on PvE battles, you’ll want to increase a Poison wyvern’s melee damage. If you miss your attacks with this wyvern, you miss out on a lot of its potential damage.