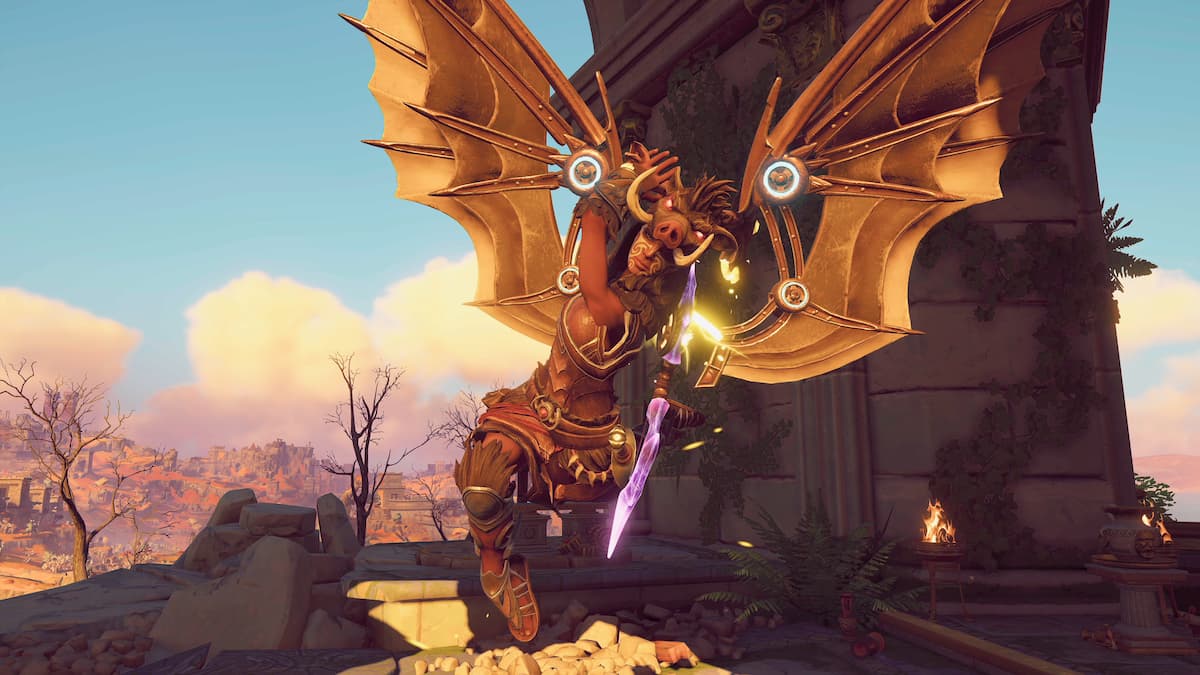 You will be fighting a lot of things in Immortals Fenyx Rising, so knowing the ins and outs of combat is an important aspect of the game. While it might seem simple at first, there are some interesting systems you can take advantage of to dish out maximum damage.

In this article, we will run through everything you need to know to really shine in a fight against the weird demons of Tartaros.

An important thing to understand about combat is that you cannot passively heal during it. You will need to use potions or plants to stay alive. Some weapons might also have a lifesteal effect that you can use, or armor pieces might allow you to regain health under certain conditions.

You have two weapons you can attack with. Your sword will do more damage in the early game as you can land more shots, but the slower moving ax will build up an important element called stun on any enemy that it hits.

All enemies have a secondary bar under their health bar. This bar fills up with blue everytime you hit them with an attack that causes stun. When you fill it all the way, they will be unable to attack for a set period of time, and you can really go to town on them.

Many attacks can be parried by pressing LB and RB at the right time, allowing you to counter attack. Getting it at just the right time can reflect incoming projectiles, and even stun enemies if you have the right gear equipped. Enemies can do attacks where they will briefly flash red. These cannot be parried and you will need to dodge them.

Dodging will not just get you out of the way of attacks, it will also leave them wide open to counter attacks by slowing time if you land a perfect dodge. Dodges also have I-frames, so if you dodge with an area of effect attack at just the right moment it won’t hit you, but this won’t count as a perfect dodge, and it is a very narrow window.

If you crouch, you can sneak up on unaware enemies and do considerable damage with a stealth attack. It will only be a factor on rare occasions, but it is worth opening fights against larger opponents this way if you can. Later in the game you can get items that will make you go completely invisible to take advantage of stealth mechanics anywhere, at any time.

As you land hits on enemies, you will notice a combo counter on the right of the screen will go up by one for each strike. Getting hit will reset this meter. The higher the Combo Counter the better, as your damage also increases as this goes up. The higher the combo stage, the higher the damage bonus, and some weapons and armor pieces will also give increase damage thanks to special combo meter perks.

Other than throwing rocks with Godly Abilities, which will get into later in the article, the bow and arrow are how you fight at range. You have two main attacks, a Quick Shot by pressing the right trigger, and a charged shot by holding it. If you hit the right bumper while aiming you will be able to fire a guided arrow that you can control, thanks to one of your Godly Abilities. Headshots will deal more damage than body shots.

To do more damage, you can increase the level of your weapons and armor at the Hall of the Gods. You should also experiment with different weapons and armor against different enemies, as they all have perks that will increase damage under different circumstances. You can also chug a potion to increase your damage, or your defense, if you are in need of a little boost.

Skills and Godly Powers can be unlocked using Coins of Charon earned from challenges found through the game. These will give you enormous combat benefits. Some weapons and armors pieces will also give you additional bonuses for using certain skills and abilities.

All skills and Godly Powers use Stamina, and will have a certain stamina cost. You will not be able to use them unless you have enough stamina. Upgrading these skills and powers is vital, as they can do an insane amount of damage to enemies if used at the right times.

Make sure you read up on all of them, and pick ones to upgrade that suit your playstyle and needs.