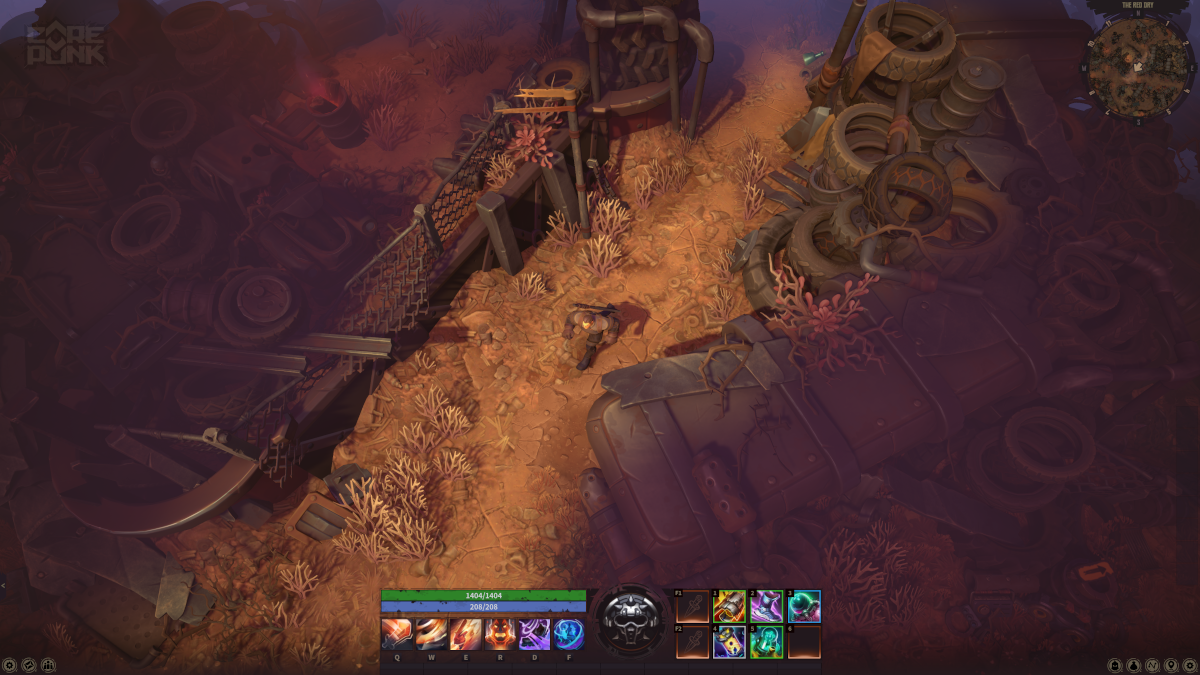 Corepunk is a new top-down MMORPG that blends a mix of post-apocalyptic styles and a fog of war to create a fresh MMO. Like other MMOs, the game is going to offer a mix of open-world, PvE, and PvP gameplay. But these are just the basics of what the game is. Let’s delve deeper and see what it is all about.

Corepunk’s gameplay allows players the opportunity to play the game however they want. When starting the game, players are greeted with a list of heroes to base their appearance on. Currently, there are characters that look like Demons, Orcs, Huntresses, and more. These heroes tend to sway to certain archetypes, but players can build their characters any way they want with weapon specializations.

As for the combat, players can expect button combinations similar to MOBAs. Abilities are bound to QWERDF, the same buttons that League of Legends uses by default. Also, players will have an active inventory with six spaces available on the number pad.

Players can develop their characters more as they discover artifacts. Artifacts are items found in the game world that add extra active abilities to your character, allowing for mixing and matching of specializations to create your unique build.

Finally, there are passive talents to choose from. There are nine branches in the game, and players are allowed to chose three to enhance their build. Players will assign points to their passive trees as they level up and by completing tasks in Corepunk. The level cap is set to 40, so performing end game tasks will further enhance your characters specialization and build.

An MMO lives and breaths off its end game. Corepunk has its own endgame system in place, allowing players to compete in PvP, explore difficult dungeons, do world content, or focus on crafting.

The dungeons work slightly different from MMOs. Dungeons in Corepunk are randomly generated, similar to ARPGs like Diablo and Path of Exile. You can explore these dungeons solo or with up to four people. There will also be raid bosses, mini-bosses, open-world bosses with a roaming camp system. The developers want to create the sense of a fantasy and punk world with danger everywhere.

Furthermore, the PvP system in the open world is relatively different from other titles. Because of the game’s fog of war system, open-world PvP is more dangerous. Players will need to keep on their toes if they enable it, as they can get the jump or be jumped by anyone. In addition, players may lose some inventory on death, with more active player killers having the chance to drop artifacts. There are also the usual Arena and Battleground options for more structured PvP.

Players in MMOs have come to ask this question about modern MMO releases. In recent history, several MMOs have had pay to grind less options, while other MMOs have chosen cash shops as part of their revenue stream. Corepunk too will have a revenue system, but fans should not need to worry.

Corepunk will operate off a box cost and further cosmetic options revenue. Players can buy the game once and can play anytime. Some premium cosmetics will then head to a cash shop for players to purchase skins for their characters and more. They specifically mention that everything in the cash shop will only affect cosmetics. There will be no boost options, pay to grind less, and other features fans are worried about in today’s MMORPGs.

Furthermore, Corepunk will operate a season pass that modern gaming has picked up. Season passes tend to have free options, as well as paid options that offer more unlocks and faster progression. Either way, players do not need to worry about feeling they need to spend more money to play the game.

So far, Corepunk’s release date is unknown. There is a strong chance that the game could release in early 2021. However, the pandemic is still raging, and the work-from-home situation has delayed their production ever so slightly.