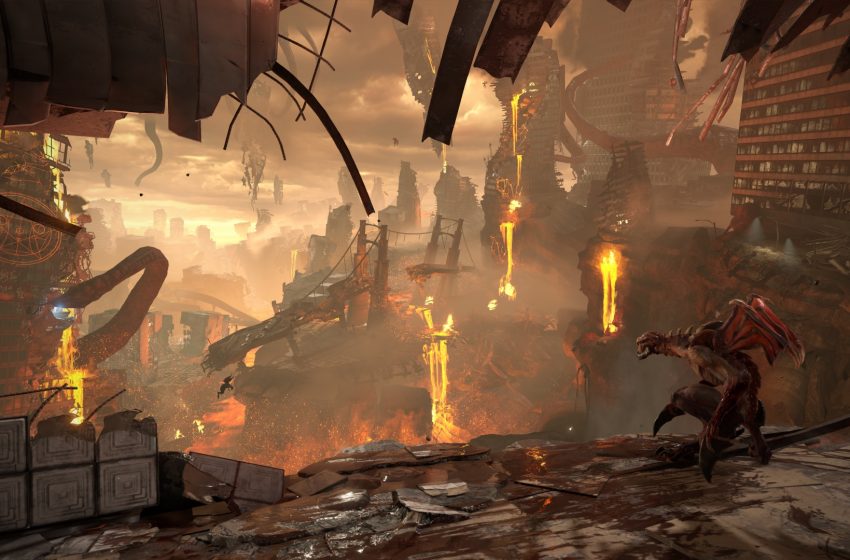 Doom: Eternal would not be a Doom game without an extensive list of weapons and heavy firepower for you to use against the horde of relentless demons you have to fight through. You have a total of eight weapons, but six of them feature modifications to change how you use them in combat.

The classic shotgun experience in Doom. The combat shotgun is the first weapon you receive in the game, and it’s a heavy weapon from the get-go. It blasts enemies up close and deals a great amount of damage. There are two modifications: the sticky bomb and the full auto. When you want to hit a small cluster of enemies, or throw an explosive down a Cacodemon’s throat, the sticky bomb works amazingly. The full-auto gives you the extensive power of the combat shotgun, but from a distance at a single target.

For those who want a little more focus and marksmanship with their attacks, the heavy cannon is an excellent weapon. You can fire much further than the combat shotgun, and you will probably only hit one target, but your opponent is going to feel that heavier firepower. It comes with a scope modification of a missile barrage. When you need to make a precision shot, the scope hones in on your target and you can hit their head clean off. The missile barrage will fire multiple missiles and stick to your opponent, causing a lot of damage all at once.

You find this weapon during the Hell on Earth mission, after defeating a wave of demons and encountering your first Arachnatron.

When the demon you’re fighting has a shield, the plasma rifle is a great tool to immediately lower it, and even cause it to explode. It’s a rapid-fire weapon, similar to the chaingun, and is always a great fallback choice. It has a microwave setting that when focused on an opponent, causes them to remain in place while you slow cook them, and then explode, damaging others around it. It also has a heatwave blasts that builds up power the more you use it.

You find this weapon on the Exultia mission, at the start of the Hell portion of mission after you enter the portal.

If you need a blast to hit multiple enemies or eat a massive chunk of a single target, the rocket launch is always a good choice. It’s a rocket launcher. When has that ever been a bad choice in a video game? It comes with two modifications: remote detonation and lock on. With remote detonation, you can fire the rocket and then decided the best time to set it off, hitting multiple targets. The lock on option focuses on a single target, and fires multiple, smaller rockets at them, and follows them.

The rocket launcher is on the Cultist Base mission where you’re about to fight some Mancubus demons, on a ledge.

The shotgun that made Doom guy the way he is. It’s a hefty, double-barreled shotgun that deals a massive amount of close-range damage to opponents. It does not have two modifications, instead, it only has one setting, which is a hook. You can use that hook to hone in on a target and drive straight at them, rather than needing to rush over them or chase them around the map.

You locate this after taking control of a Revenant in the Cultist Base.

Much like the plasma rifle, the ballista is a uses energy cells and deals precise damage against shields and other demonic monsters. For those who felt they need to use a crossbow during combat, it’s a great alternative. It has two modifications: arbalist and destroyer blades. The arbalest charges up the weapon, sending out a concentrated shot that explodes on shortly after impact. The destroyer blades charge up a blast and then unleashes a horizontal blast outward, cutting demons it hits.

After completing the Cultist Base you receive this in the Fortress of Doom.

When you want to unleash a barrage of bullets against a horde of demons, the chaingun has your back. It uses heavy ammunition, similar to the heavy cannon, but it fires them much more rapidly. It has two modifications: a turret form and an energy shield. While using the turret, you remain in one place and fire a more concentrated array of bullets against an opponent. The energy shield setting places a protective barrier in front of you, allowing you to still shoot at demons.

You receive this weapon during the Super Gore Nest mission, after you attempt to blow up the nest, and it’s behind a locked door. You need to complete the area ahead of you, and then return for it.

The BFG. The iconic Doom gun. It’s a powerful weapon that you can unleash against the demon horde, and it does an incredible job. When you fire it, it shoots out a large green ball that slowly moves across the battlefield, reaching out with its tendrils to latch on and immediately kill any demon it touches. There are a handful of foes it does not hurt, so don’t always rely on it to get you out of a troubling situation.