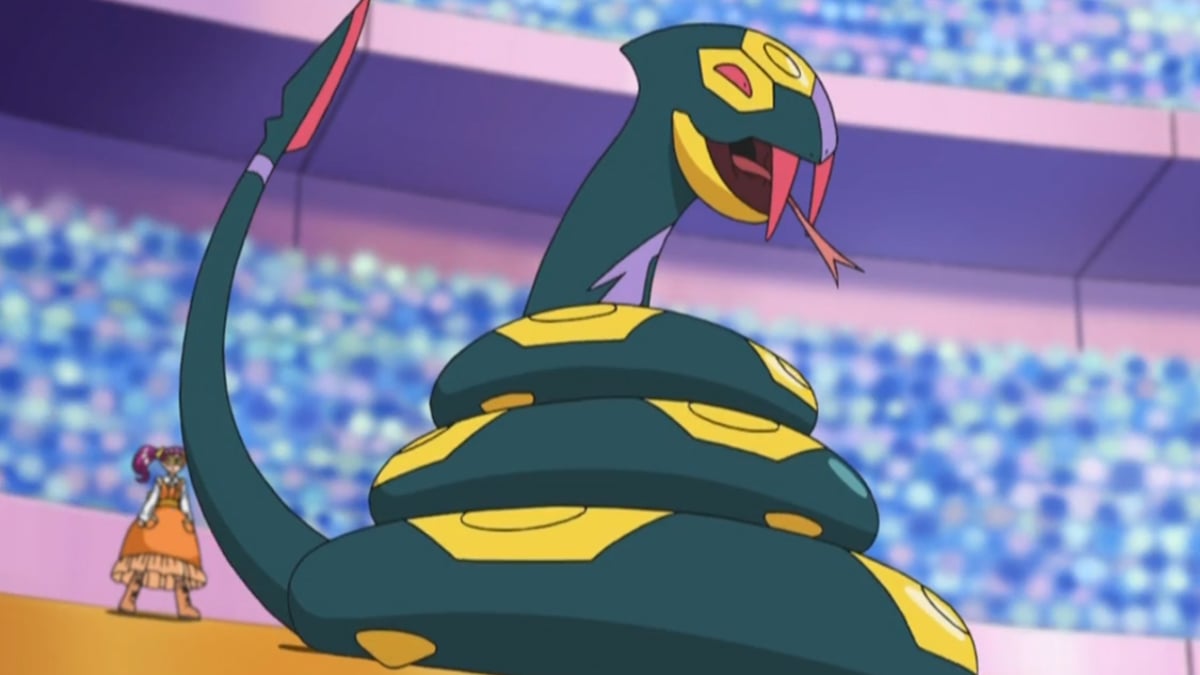 In real life, seeing a snake is usually cause for concern. In the Pokémon series, they can be some of the coolest creatures to catch. Like any animal-based Pokémon, some are more appealing than others though. We’ve ranked all the snake Pokémon here, comparing their designs, place in the games, and general serpent-itude. That’s not a word, but check out our list anyway.

Related: Every dog Pokémon in the series, ranked

Look at this lil’ guy. It was never going to get very far on this list. Dunsparce is a “land snake Pokémon,” and it lives up to that name by burrowing into the ground and just…doing nothing most of the time.

Our bottom snake Pokémon all look so sad. Like Dunsparce, Silicobra digs into the ground to escape predators, but it also takes an active role by ambushing its own prey from within the sand. Sandaconda looks bored rather than sad, but at least it has a cool Gigantamax form resembling a tornado.

This legendary Pokémon has a few different forms, but the most commonly known is the 50% Forme, resembling a snake with back bling that would make a Fortnite player jealous. Pokémon X and Y’s legendaries are shaped like letters of the alphabet, with Xerneas’ antlers crossing in an X shape, and Yveltal’s whole body forming a flying Y. Turning the letter Z into a slithering snake is a great design choice.

First off, Seviper’s design is top-notch. Between the long fangs and razor-sharp tail, its Poison typing is on full display. Its place in the Gen III games also elevates it on this list. Ruby and Sapphire’s version exclusives include many similar Pokémon, such as Seedot and Lotad or Solrock and Lunatone. Seviper and its rival Zangoose are totally different animals and types, but they represent the snake-mongoose fight from Rudyard Kipling’s classic story Rikki Tikki Tavi. That’s some clever inspiration.

It’s hard to beat the originals, and they sail to an easy third place on this list. Arbok specifically is inseparable from the hit TV series, as it was paired up with Team Rocket’s Jessie from the start. They have the most resemblance to real-world snakes too, with a dash of purple coloring to make them look cool. Plus, every kid feels like a genius when they realize their names are just “snake” and “cobra” backward.

Yes, Onix is a snake. Specifically, it’s listed in the Pokédex as the “rock snake Pokémon.” There isn’t a whole lot of resemblance, but that doesn’t stop Onix from being awesome. Much like Arbok and Jesse, it’s inseparable from Brock, whether you’re watching the show or battling the very first gym leader in the Pokémon series. When Gen II rolled around, we got its evolution Steelix, a natural step up from Rock-type to Steel-type — a great introduction to the new typing in Gold and Silver.

Starters hold a special place in many trainers’ hearts, and Snivy is the only one to be modeled after a snake. Its pompous look is perfect since that attitude is often used when personifying the animal in stories. What’s more, it slowly becomes more snakelike as it evolves, losing its limbs until it reaches its superior form, Serperior. Again, that final name perfectly conveys this Pokémon trio’s attitude. Plus, it’s an inversion of a common Pokémon evolution trope. Some fans complain that quadrupedal Pokémon almost always end up standing on two legs in their final forms, but Snivy goes the complete opposite direction.