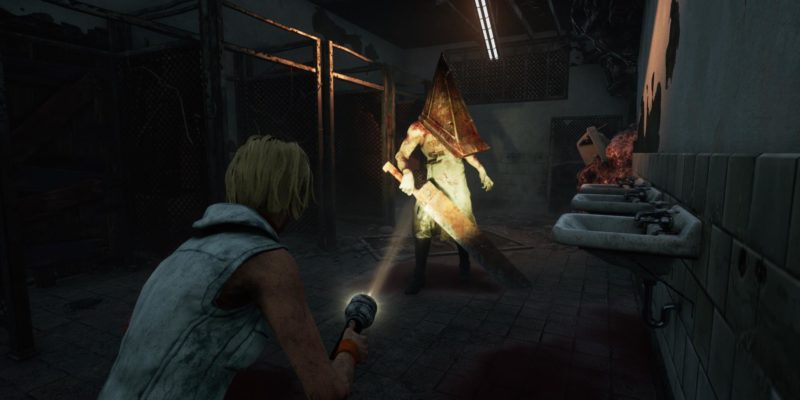 The player-v-player horror game Dead by Daylight dropped a bombshell for fans of classic games today: Cheryl Mason and Pyramid Head from the Silent Hill franchise will become playable characters in an upcoming DLC pack.

Along with the two new characters, there will also be a new Silent Hill map. Silent Hill is the latest crossover with the Dead by Daylight; previous crossovers included the Left 4 Dead franchise and popular movie franchises like Scream or Nightmare on Elm Street.

Cheryl Mason will be a playable survivor in the upcoming Dead by Daylight DLC. She served as the main protagonist of Silent Hill 3, yet was also a key character in the original Silent Hill game and Silent Hill: Origins. In an interview published by PC Invasion, the creative director of Dead by Daylight explains that the development team chose Cheryl over the other protagonists because she was so linked to the main narrative of the original games.

Here are the names of the perks Cheryl will have in the game, and what they will do. (As this is pre-release, they are all subject to change.)

It should be noted that in Silent Hill 3, her name was Heather Mason. She would take the name Cheryl in the normal ending of the game. Heather herself was a reincarnation of the original Cheryl Mason from the first Silent Hill game.

Pyramid Head will be a new playable killer in the upcoming DLC, going by his original label as the Executioner. First appearing in Silent Hill 2, the Executioner was a grotesque monster that served as a metaphor for the protagonist’s fragile psyche. With his giant head covered in a pyramid helmet and a giant butcher blade, the Executioner is one of the most iconic figures from the Silent Hill franchise.

In the Dead by Daylight game, the Executioner will be attacking using his huge blade he drags along, as well as a smaller knife he carries around. Using the knife, he can open trenches on the floor that leads into the dark dimension as portrayed in the Silent Hill games. If survivors walk through these trenches, they become Tormented. Being Tormented means that once the survivor is in the dying state, Pyramid Head can then summon them into the Cage of Atonement. The Cage of Atonement essentially works the same as hooks in the main game.

Here are some perks that the Executioner will have in the game. (These perks are also subject to change.)

The new Silent Hill map that will be part of the DLC will be the Midwich Elementary School from the first game. In a separate interview conducted by IGN, the creative director claims that the school was chosen as a map because it represented the first time players really got to experience the world of Silent Hill. The Midwich School was designed to be as similar to the original version in the original PlayStation Silent Hill as possible.

There will be a new feature in Dead by Daylight called Legendary Outfits, which will be costumes that turn characters into completely different characters. For example, Cheryl will have a Legendary Outfit based on Lisa Garland, giving her a completely new model. Lisa is a nurse from Silent Hill, and is a major recurring character in the early games.

Veteran composer Akira Yamaoka, who’s most famous video game work stems from Silent Hill, has also composed a new score based on the Dead by Daylight theme in the style of Silent Hill.

Dead by Daylight is a multiplayer, horror game, first released in 2017. In the game, a group of survivors must band together to escape from the lair of a horrific serial killer or monster. Up to four players can form a group, while another player will take control of the killer or monster. It is up to the survivors to avoid being caught by the killer, and they need to fix several generators to unlock the gates to their freedom. The Silent Hill DLC is slated to release this June.