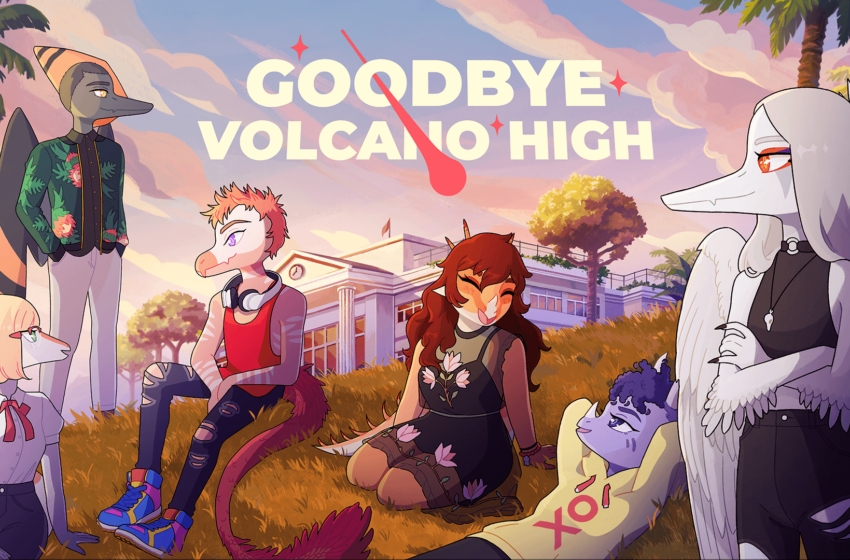 The end of an era and the start of an age. KO_OP gave the world chills as they dropped their trailer for their new game Goodbye Volcano High. It’s a coming-of-age narrative game and a love story that follows the story of a group of friends as they reach the end of high school and figure out how to chase their dreams of being in a band together, and figuring out what they mean to each other. Oh, yeah, and they’re all dinosaurs. The logo shows a meteor striking through the title, it is to be determined if it is meant to be figurative or literal. The website for the game is live and digs into the stories of the main cast, designed by Lulu Viatge.

Fang, the protagonist, and lead vocalist/rhythm guitarist of the band, is at a crossroads. This nonbinary teen is a rebel and has to choose whether to keep up their shell and live their life closed off and cynical, or learn to let people in and show the world who they really are. The choice will be up to the player. It is a love story after all, and that includes self-love.

Trish is the best friend, who is the band’s lead guitarist/backing vocalist. Things seems to be a little rocky between Trish and Fang, so it seems the player’s choices may greatly affect is the friendship survives.

Lastly, is Naomi and Naser. They are the rivals. Fang and Naser are siblings, so the rivalry formed naturally there as Naser loved the very system Fang rebels against, and Naomi isn’t much different. She is class president and these two make a dynamic duo of getting on Fang’s nerves.

All of this story is held together by the moving and powerful soundtrack by Dabu, that drives the narrative, and our emotions. It’s hard to not already feel attached to this group of dinosaurs. Goodbye Volcano High is coming to Playstation 5, PS4 and Steam in 2021.