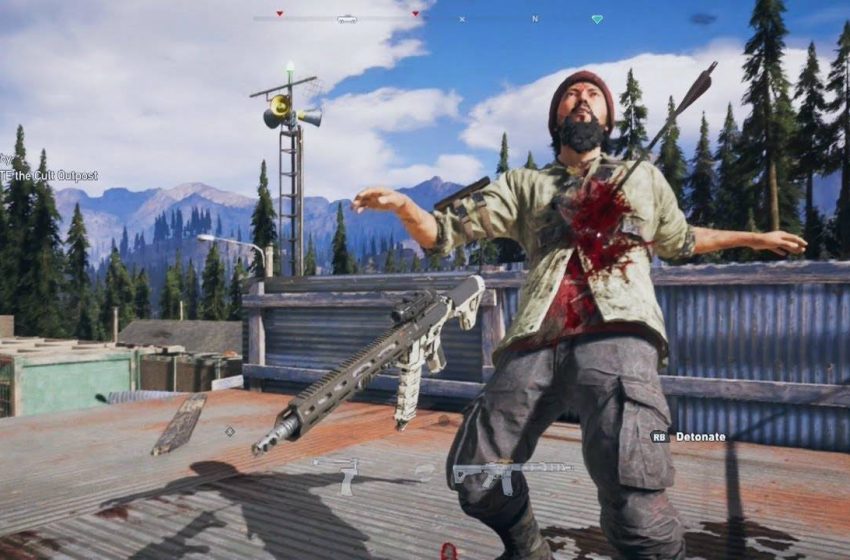 Far Cry 5 is an open world game, you will have to deal with three bosses first to reach the final one who is Joseph Seed. All three bosses have their own region, and you have to earn resistance points to overthrow their rule and lead the area. The game starts with a small cutscene, where you will notice a group of marshals trying to arrest the cult leader but eventually they failed. After a short mission The Warrant your next mission is No Way Out.

Once you are out of the crashed helicopter run into the woods, the white arc in the center of the screen shows that the enemies can see you. Keep running till you reach a house, on your screen, you will see the info about Detection Meter. The same arc that you saw before. If it is full and flashes then it means you are spotted. You can quietly move behind an enemy to perform a Takedown attack. Try it on the guard at the door. You will get a Handgun with some ammo. Inside the house, you can pick up a pipe, and some ammo at the corner end. There is also a baseball bat near the lamp. Picking up things will be very common in Far Car 5, each time you navigate to a new place try looking around for supplies. On the right side of the house, there is a watchtower, above you can get some supplies.

Meet the Marshal at the trailer house: After getting the radio call, move to the next marker, and you will find Marshal in a house, try to look for enemies around. There will be a cutscene.

Hold Off the Cultist: You will get a weapon, you will have to take down the cultist attacking you. Look for the red arrows, that is the easiest way to spot. There are wooden logs around you can take cover if you find yourself ambushed by a group of cultist.

Get In the Truck: Get in the truck with the marshal, and keep shooting the enemies in your path. The marshal will drive, you will be handling the gun for a while here.

Survive: Further, there will be more, keep shooting on the back side, you have to ensure that the truck does not reach you. Take the dynamite from the back of the truck and throw it in the path of the truck. Also, keep a watch on your health. You can use the medkit to revive your health bar. There will be cultist all around you with a plane shooting directly on your face. The chase will end with a blast on the bridge.

A Glimmer of Hope: In the next cutscene you will see the marshal is captured by the cultist while you will be saved by Dutch. He will take you to a bunker where Character customization unlocks. After customizing your character talk to him. He will ask you to build a Resistance so that people can stand against the cult.

Take the gun and map from the safe: On the huge board on your right, you can get information on the entire cult family. You can go through it, or you can look in the safe on your left to get the map and gun. A small tutorial will appear on the screen telling you about the Weapon Wheel. Once done exit the bunker.

Dutch will be on the radio, he will guide you about the Resistance. To build it you have four ways, first Rescuing Civilians, second destroying Cult Properties, third Complete Missions and last liberate the Cult Outposts.

Outside the bunker straight ahead you will see a tree with a platform over it, climb it and you will spot a few civilians beaten by the cultist. Rescue them. There are two guards and one civilian. Kill them and save the hostage and you will earn a Resistant point. You can loot the guards now, that will give you Throwable explosives. Talk to the hostage and he will give you a location of prepper stash – Sunken Funds, you get some good supplies from here. Each of these stashes has a small mission, so follow the green diamond icon on your screen. A shortcut to reach the stash is to climb up the house behind the civilian. Just look above the mountain on right, go up and you will spot two cables, first one near the stairs, and the second one the back of the house. Take the second one, and you will reach the boathouse. Now just after crafting some explosives, the mission can be completed, but below are some mission you can play to earn Resistance point and get an ally.

Sunken Funds: Go near the small house and you can begin your pepper stash mission Sunken Funds. Go towards the house on right, look for the yellow glowing marker. Jump in the water and swim from below you will enter the boathouse. Activate the power from the right and then return to the small house from where you started this mission. On the left there is a valve, rotate it and open the green door on the ground. Swim below and you will see the water is dried out. Break the blockage, and collect your stash by surveying things around. You will also get a Bowgun inside. Collect everything and return outside. Dutch will ask you to craft some dynamites.

Ranger Station: The next thing you have to do is liberate Ranger Station which is a cult outpost. Come out of the bunker and walk on the left of the boathouse, take the stairs up and follow the black smoke. You will reach the outpost. Kill all the cultist guards in the station and rescue a hostage.

Guns for Hire Walkthrough: It is a very short mission, you just have to secure our research station.

Go to fishing dock: After the cutscene, go towards the house near the flag, and take the map, a new mission will unlock which is the main story mission. If you plan to track down this mission then head to the next marker that will take you to the fishing dock and there save a Resistance member, who is a soldier.

Reach the Forest Research Station: Reach the next marker, and secure the area, This time you will get a support from the hostage you just rescued. This is Guns for Hire control feature of the game where you can command an ally to move towards a target location and attack.

Secure the area: Next once again you will be fighting with the cultist around. Kill them all to secure the area and this objective is over.

Liberate Dutch’s Island: After completing the above Guns for the fire mission, look for green crates, on the right, there is a house and on the back corner you will find a box. Loot it and you will unlock Crafting. You can craft Molotov’s and Explosives, refer the tutorial. There is a hostage in a room with red door and office written over it.

Continuing with the main missions, after doing all those activities and learning almost everything, you have to reach the radio tower.

Go to the Radio Tower:

Now you have completed the prologue part of the game where you played to main missions The Resistance. The main mission is followed by few sub-mission which are necessary to complete to finish the chapter. In the next part, Holland Valley you will be playing various missions to build enough resistance to take over John Seed.​ You can also read Far Cry 5 Wiki for more updates on the game.