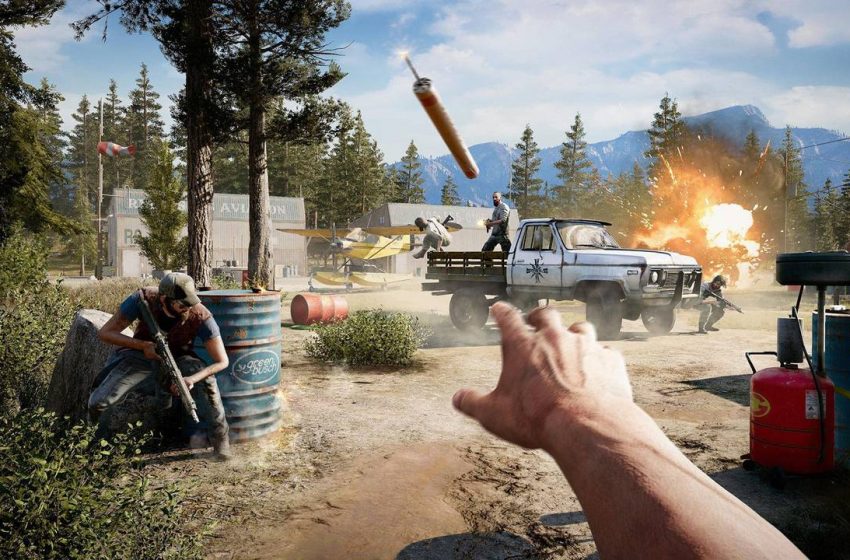 The moment you start Far Cry: New Dawn, you’ll want to grab the Rusty SMG-11 to replace your starting pistol. It’s always an upgrade to have something a little more fully automatic.

An assault rifle should always be a part of your repertoire, as you’ll be needing one to get through most firefights. The Rusty AR-C is a solid all-around assault rifle that can effectively deal with the game’s early threats.

If you’re not great at headshots, no amount of bullets is going to take out enemy vehicles in an instant. The Rusty RPG-7 is an essential weapon to have in your arsenal to deal with those junky Highwaymen cars before they have a chance to roll up on you.

The Saw Launcher weapon type is a bit of an acquired taste. We love it because the blades it fires can bounce around and hit multiple enemies. However, we understand that others personally prefer more direct, potentially explosive options. If you’re on the fence about this makeshift weapon, we suggest at least picking up the Saw Launcher V.0 to see how it feels.

The Makeshift weapons are where our opinion of “best” starts leaning towards the ridiculous territory. After all, Rank II is where the weapons start having unique death animations that are well, not pretty–but in a good way. Take the Makeshift AK-47, for example, which has a literal screwdriver as its bayonet. You can only imagine the gruesome results.

Aside from that lovely perk, the higher damage, better handling, and increased magazine make it a significant step up from the Rusty AR-C. The rate-of-fire may be a bit lower–but that screwdriver, though.

The explosive force of the Makeshift RAT4 isn’t much different from the Rusty RPG-7, but an increase in handling makes this the obvious next step up. Its lock-on capabilities make it easier to drop helicopters.

The Makeshift Bow may seem a solid choice for stealing about, but the Makeshift slingshot should be the one you get. Its statistics are identical, but it has the added perk of firing three different ammo types as opposed to the bow’s two. It’s a small difference, but if you like to sneak around, it helps to have options to dispatch foes.

In all honesty, the Rank II weapons aren’t great in Far Cry New Dawn, but the Makeshift P226 is a good starter handgun to check out, especially if you like landing stealth pistol headshots on your enemies.

It only has support for regular ammo, but it’s got decent range and proper handling. You’ll be able to take down most Rank II enemies with this, pair it with another Rank II assault rifle of your liking.

This is the only shotgun you’ll see on this best weapons list because, well, the shotguns in Far Cry New Dawn don’t seem all that effective. However, at Rank II, the Makeshift SBS is one of the better options on offer.

It’s got a pretty nice range for a shotgun, and it seriously packs a punch, allowing you to kill most enemies up close. The only drawback is its small capacity due to the double barrel, but it’s still an excellent option to keep in consideration.

The VECTOR is fun and easy to use in Far Cry New Dawn. You could probably substitute this in place of a proper assault rifle. It’s effortless to handle, has good accuracy, and allows you to make use of armor-piercing rounds.

It doesn’t have that much range on it, though, so you can pair this with a shotgun if you’re planning on getting close to your enemies.

Melee weapons make for a great way to take down the baddies without expending hard-earned ammunition. The Optimized Steel Bat is a solid one to brandish, capable of easily downing enemies with a simple strike to their faces. You can also keep throwing them at enemies for massive damage, which is a joy all its own.

We know what you’re thinking: “Did they pick this because it has a kitchen knife attached to it?” You’re right, but the lever-action shotgun makes for a fun curiosity that packs a decent punch against enemies. If one shot doesn’t do them in, one quick melee will undoubtedly finish the job. The ability to fire different ammunition types also helps make this a gun well worth having.

On the other hand, if you’d prefer to go with an assault rifle, you can’t go wrong with the Optimized AKMS. It certainly has better range than the VECTOR, though its rate of fire is only half as impressive.

However, this gun comes with a bayonet, which means that melee attacks with this weapon equipped let you deal a bit of extra damage.

The Recurve Bow has always been one of the best weapons in the Far Cry series, and the same rings true in Far Cry New Dawn. This might very well be the best weapon in New Dawn.

In Far Cry New Dawn’s Rank III weapons, I’d recommend going for the Optimized Recurve Bow over a sniper rifle, only because the MBP .50 doesn’t compare to the Elite tier sniper rifles, and you’re better off saving your resources for those instead.

The Optimized Recurve Bow has good range and can be used with incendiary and explosive arrows. It’s excellent for both ranged and close-quarters encounters, and will instantly kill any unsuspecting enemy in Rank III.

The next iteration of Far Cry 5’s Optimism Shovel is quite the upgrade. Titled the Reality Shove, this smiley face printed melee weapon is well worth using for its power and core gimmick. If you’re a fan of throwing melee weapons, this is the one to have once you gain access to Elite Rank weapons.

Far Cry: Blood Dragon fans, rejoice! You can use Rex Colt’s iconic pistol in Far Cry: New Dawn. While not a massive upgrade in damage from other pistols, its burst fire capability makes it a valuable asset in any firefight.

The “Spraypaint And Pray” SPAS-12 can make short work of enemies. Its firepower and ammo capacity makes it a great way clear through groups. Also, the suppressor is a nice perk that makes it a good gun to use for predator play.

“Bear With Me” Saw Launcher V.3

By the time you’re able to acquire Elite Rank weapons, you’ll be forced to decide between two different Saw Launchers: V.3 and V.T. The V.3 is merely a more powerful version of previous iterations, which is worthwhile if you’ve enjoyed the way that weapon functions. However, we recommend the Saw Launcher V.T’s, as its boomerang capabilities allow you to preserve ammo.

Assuming you already have the Optimized Recurve Bow in Far Cry New Dawn (and why wouldn’t you?), there’s no real reason to craft a silenced pistol in the Elite tier. With that in mind, consider picking up the D50 instead, which supports all three ammo types, and is incredibly easy to handle.

Possibly the best assault rifle in the game, this “Radiation-Pink” AK-MS is the Optimized AKMS but better. It has better damage, and comes with the bayonet for the extra melee damage in case you need it.

It isn’t the best assault rifle in terms of raw firepower, but it gets the job done.

And of course, the SA-50 continues to be the best sniper rifle you can get in this series. In Far Cry New Dawn, the SA-50 gets a beautiful makeover with the “Length Of Pipe” variant, and it’s fitted with a suppressor so you can snipe your enemies and liberate outposts from afar.

And those are the best weapons in Far Cry New Dawn, at least in our opinion.