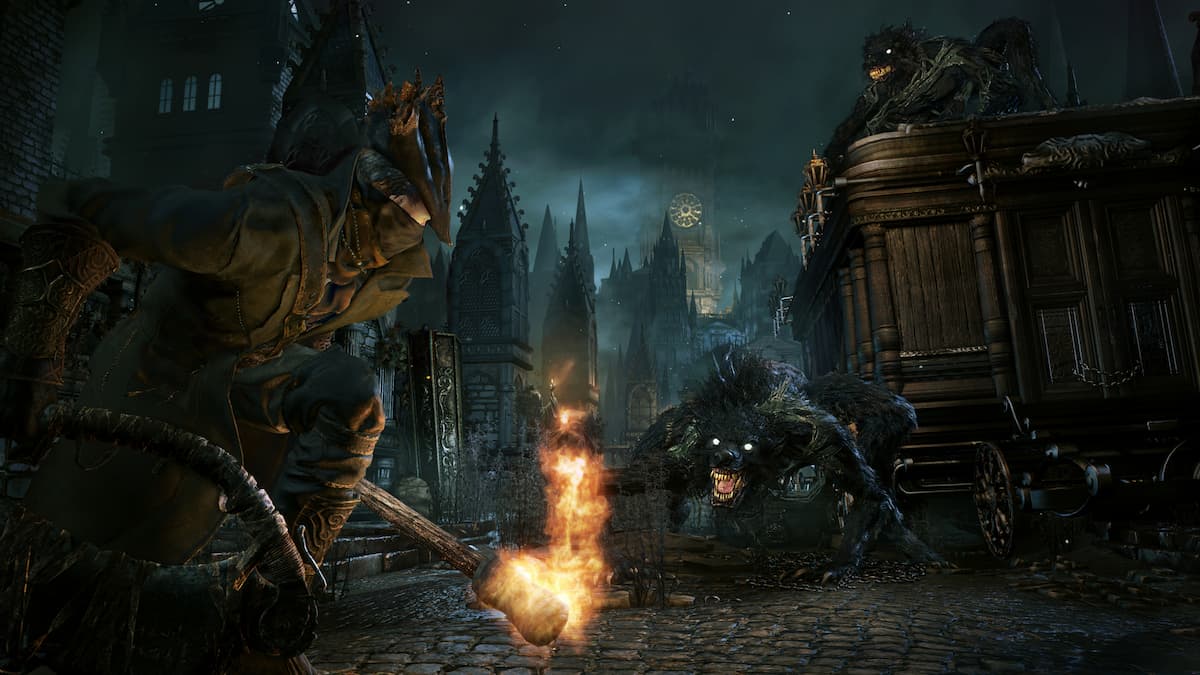 Since the release of Borderlands 3, fans have been rejoicing for a game they have been waiting for some time after the “pre-sequel.” There are plenty of video games that have been sitting on dusted shelves that deserve a new title. Many of them are fan-demanded and deservingly so. The outcries for game sequels have been going on for a long time with our list.

Some games here already have sequels, but they left us on a huge cliffhanger that the wait is excruciatingly painful. How long must we wait to get another title from these video game franchises? Hopefully, it will be sooner than we expect. Here are fifteen games that need a sequel!

Bloodborne is an action role-playing game developed by FromSoftware and published by Sony Interactive Entertainment in 2015. In the fictional city of Yharnam, Bloodborne follows the hunter – the game’s protagonist – as they combat beasts and monster-like creatures while unraveling an ancient, mysterious narrative. Despite its widespread acclaim, it’s been years since Bloodborne was released, and fans are left wondering whether they’ll ever get a sequel.

The main reason why the game needs a sequel is that there’s so much more to be explored within its universe. Bloodborne offers so much potential for new stories, characters, and mechanics that it would be a shame not to see them realized in a sequel. The game touched on themes of cosmic horror and the mysteries of the unknown, leaving many unanswered questions that fans still hope to see addressed. Furthermore, the game left players with an unfulfilled promise of an expansion that never materialized, leaving many wanting more.

Brütal Legend is a breath of fresh air for a game that is an action-adventure and real-time strategy game. Some gamers say that celebrities should not be voice actors in video games, but this one proves them wrong with Jack Black and many others.

There has been both fan demand and interest from Tim Schafer, the game director of Brütal Legend. So there is a chance to give this game another chance with a sequel. There is just something about a metal-inspired universe that can attract metal fans and gamers for a possible future title.

Demon Souls, the iconic action-RPG game, captivated players and critics alike with its unique blend of challenge and reward. With a deep story, challenging enemies. Demon Souls was a classic from when it came out and was loved for its difficulty. The need for a sequel became apparent as the game developed a large and loyal fanbase.

A Demon Souls sequel would have the opportunity to build upon the foundation of its predecessor while expanding on the world, story, and mechanics. Fans of the original game are sure to appreciate a deeper and more involved level that follows on from the events of Demon Souls. With improved graphics and an updated combat system, a sequel could provide the same unique challenge that has kept players hooked for years.

Fable 3 was received quite well by fans, but some of them think the game could be improved further, and it has fallen short of its predecessors. For one thing, the combat system lacked depth. Also, there need to be more customization options to be desired. A sequel could address these issues by introducing enhanced combat mechanics, greater player customization, and a larger world to explore.

Furthermore, Fable 3 had an open-ended storyline with multiple endings, which provided re-playability; a sequel could build on this foundation and give even more story choices for the player to explore. Finally, the graphics and animations of Fable 3 were decent, but a sequel could take them to the next level with improved visuals and even more detailed animations. All of these improvements would make for a fantastic Fable 3 sequel and a game that fans of the original would surely appreciate.

There has been a huge fan demand, memes have been made stating that Half-Life 3 is confirmed, and the wait has been agonizing. Half-Life 2 arguably has one of the biggest cliffhangers in all of gaming, and there has to be a sequel to tie all ends together. Valve has been a huge teaser as three of its iconic and beloved games do not have another sequel.

Half-Life 2 has been without a sequel for over ten years. Hopefully, Valve is still thinking about its fans and will deliver this long-awaited sequel in some unique fashion in the future, if there will be one for this series’ fate.

At times, there are reasons why sequels for beloved game series are wanted. Jet Set Radio Future hinted at another sequel in the last cutscene, and after all these years, we still have no sequel. Plus, this series has a unique art style and gameplay that was unlike any other game at the time.

There were rays of light for another Jet Set Radio, but they have been turned down by Sega, in the case of Austin-based Dinosaur Games. It has been almost 20 years since Jet Set Radio Future has been released, so we hope and pray that Sega will bring this series back to life someday.

Okami is one of those rare gems that has an incredible concept for what it is as a game. Being centered around Japanese folklore and history, this is a treat for those heavily interested in Japanese culture. Capcom truly gave us an incredibly underrated one-of-a-kind game.

Even sales were not so good despite critical acclaim. Fans have been waiting for anything new for a home console release, and also, the director, Hideki Kamiya, has plans for a sequel. Unfortunately, that was last mentioned in 2016.

The concept of Pokémon Snap is something that still has high regard even after all these years. With many more Pokémon in the Pokédex, how is there not a sequel to this game? The Wii U had the perfect opportunity to have a Pokémon Snap sequel, but due to its low sales, it would not be able to exceed Nintendo’s expectations.

The sequel can be a graphical update to the first game with more Pokémon and locations, and fans would still be happy with it. There are just a ton of ideas for a sequel; it is a crime that there is no sequel yet. Maybe Nintendo will treat us with one after Pokémon Sword and Shield’s release.

Valve makes incredible masterpieces that offer intriguing storylines and fantastic gameplay. Portal 2 is a huge step up from its first incarnation, and it excels as a sequel. Its pacing, writing, and inclusion of cooperative mode are one of the game’s highlights. We honestly want to see more of GLaDOS and Wheatley and how their story continues. It has been almost ten years since Portal 2 was released, and we need a sequel.

The original Prototype game was a commercial success, and its positive critical reception sparked interest in a sequel. Unfortunately, Prototype 2 received a less enthusiastic reception than its predecessor. While Prototype was a hit with gamers and critics alike, Prototype 2 suffered from a lack of innovation. It was criticized for being too similar to its predecessor and lacking significant new features, and some even argued that the game felt too repetitive.

Additionally, due to its linear story and more restrictive open-world environment, it felt less immersive and didn’t provide enough opportunity for exploration. Though it may not be a popular opinion, Prototype 2 required a sequel to correct its flaws and carry on the original game’s legacy. Fans desired more of the same action-packed gameplay and engaging storyline found in Prototype and some new features to improve the game. The Prototype franchise has such an intriguing story and fascinating gameplay that it will be a travesty if a proper sequel does not follow it.

The highly acclaimed game Sekiro: Shadows Die Twice has gained immense popularity amongst gamers, and it’s no surprise that fans are clamoring for a sequel. Sekiro’s immersive world, intense combat, and profound story have made it one of its generation’s most widely praised games. Its combination of stealth and swordplay in an open-world environment has been praised for providing a unique experience. The game also features an array of fascinating characters and detailed settings.

It is no wonder why the game has become one of the most beloved in recent years and why a potential sequel is so highly anticipated. With the immense popularity of Sekiro, a sequel could expand upon the beloved game and its universe in exciting new ways. New characters, locations, and stories could be explored, while the existing mechanics and gameplay could be expanded upon or improved. The possibilities are endless for a potential Sekiro sequel, and fans of the game are anxiously awaiting the announcement of one. A Sekiro: Shadows Die Twice sequel could be an incredible experience and add a new level of excitement to the already beloved game.

The news that a sequel to Star Wars: Knights of the Old Republic II is being canceled is extremely heartbreaking. But still, there could be a chance to bring this series back into the spotlight due to fan demand and how fantastic it is as a Star Wars entity. The imagination of role-playing in a Star Wars game is an outstanding concept that would be welcomed again with a sequel to this beloved series. Will Disney bring light into this series? It would be a dream come true.

Insomniac Games’ Sunset Overdrive is somewhat a love child of a few games like Jet Set Radio and Prince of Persia, and it is an amazing experience. It can be considered a spiritual successor to Saints Row even though it is not by the same developer. Unlike Saints Row, this game has no sequel and left us on such a cliffhanger that we need one.

And unlike most developers, Insomniac Games has expressed interest in making a sequel to this fun and zany game. But with Sony’s recent acquired Insomniac Games, a sequel for Sunset Overdrive is not a priority. There is a chance, but we hope it won’t be too long of a wait.

This collaboration between Nintendo and Square has been a favorite for both Mario and JRPG fans. Super Mario RPG is a very influential game for being a crossover in terms of genre and game series. While it is disappointing that this game does not have a sequel yet, it would bring titles like Paper Mario to life.

Since Square Enix and Nintendo have made more collaborations, with Cloud being in Smash and older Final Fantasy games being on the Nintendo Switch, there has never been a huge demand for a Super Mario RPG 2. We guarantee that gamers will be very excited when two famous and beloved game developers come together to create a much-needed sequel.

Before Blizzard’s Overwatch would become a worldwide phenomenon, Valve Corporation had its own multiplayer first-person shooter, Team Fortress, which would then get a sequel that everyone knows and loves. The character classes are unique, and Valve even released video shorts of them, showcasing their backstories and personalities.

The game has aged very well despite being 12 years since its first release. While there are still many players thanks to currently being free-to-play, there is no doubt that a sequel has been begged for. Rumors have been speculated, but not confirmed by Valve.