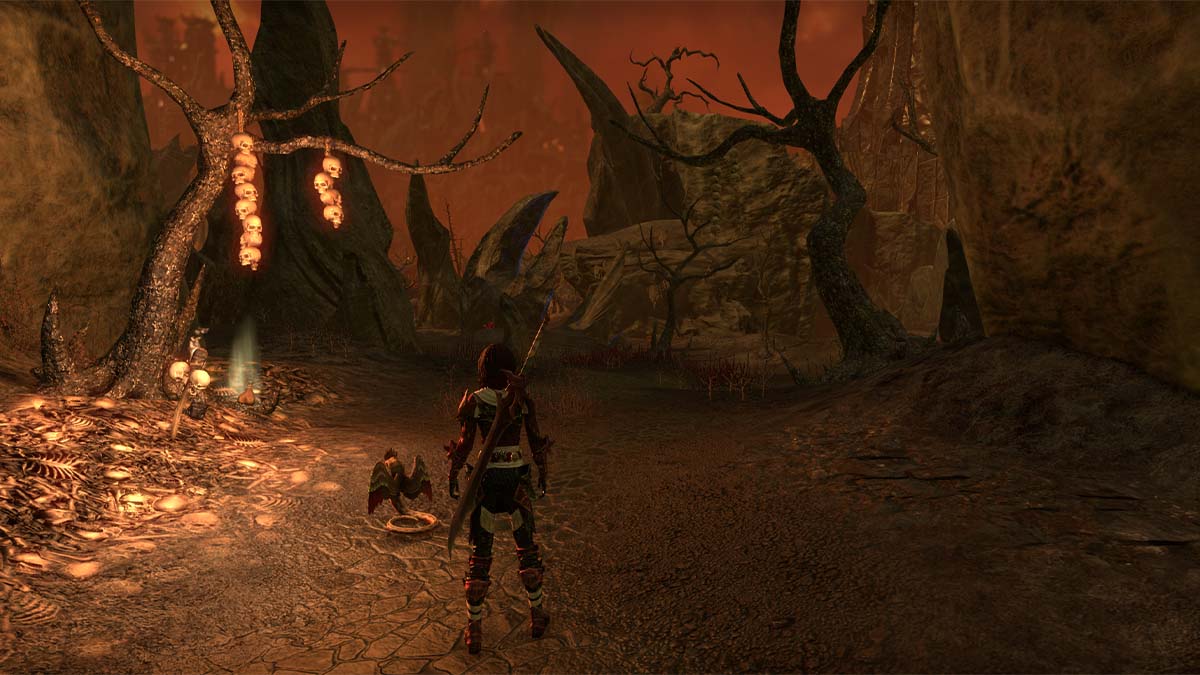 The Elder Scrolls Online Deadlands DLC is here. Along with a brand new map location come many changes and new features for players of all levels. Whether you’re just starting or are a veteran with multiple toons, you’ll find something to entice you in the Deadlands. The Deadlands features the burning, scoured fields of Mehrunes Dagon’s domain.

Players will start the Deadlands DLC in Fargrave city, which isn’t quite the Deadlands but is part of the new map. Players will find this area in a slightly offset part of the map. We were lucky enough to play an early walkthrough with lead content designer Sera and Zone lead Murphy. Sera told us there are plenty of storyline quests, objectives, and a “bunch of daily quests” in the new Deadlands DLC.

He explained the Deadlands is the final chapter in the Gates of Oblivion: “The idea is if you have completed the bare minimum of the Blackwood chapters zone story, as well as Deadlands zone story, you get to unlock two additional chapter quests; which complete the entire story for the year. It might include Mehrunes Dagon.”

Murphy further adds that Fargrave city is “outside the Deadlands and not affiliated with any Daedric Prince.” Fargrave city is also something that was created entirely in-house. Building on the story of the Daedric land, Murphy explains Fargrave city was created as a “safe space” for players to trade and hang out without feeling attacked.

The new Deadlands area in Elder Scrolls Online calls players to the burning domain. There are “friendly” Daedra to encounter, two new delves, and lots of new items. The main questline in the Deadlands sees players fighting to keep the peace in a realm where Daedra and mortals coexist. Tensions lurk beneath the city of Fargrave, and players will need to set things straight.

Mehrunes Dagon is the Daedric Prince of Destruction. The Deadlands embodies this with two key zones: the “familiar, volcanic hellsing biome” as described by Murphy, versus the “severe” destruction zone of wind, storm, and lighting. These two zones are designed to tell players they are in the Daedric realm of Oblivion.

Murphy explains that the Deadlands, or the Daedric realm, was designed to “ground the player they are in Oblivion, not some mundane location in Tamriel.” Thus, there are skeletons everywhere, titans, burning lands, and yes, Oblivion portals are still a feature.

Sera told us whenever a new DLC is launched into Elder Scrolls Online; the base game receives some updates. Here are some of the exciting new updates to the base game.

Similar to when players see a Point of Interest on their map, Skyshards and Dark Anchors will mark on the map and compass when you approach them. The Zone Guide will also direct players to their closest unacquired Skyshard if they have completed all other objectives in the zone.

Oblivion portals are still a feature in the Deadlands. These won’t be displayed on the map and will randomly appear. Once they open, they’ll remain in one place for a limited time.

Sera described this improvement to us as “freaking awesome.” He is excited about the “idea that you can store attributes, equipped armor, weapons, your quick slots, your Champion slots.” Players can purchase the armory, which is an item of furniture, from the Crown Store. Players will be able to access the armory once it’s placed in their house. If you are looking for quicker access, the Armoury assistant is available in the store.

The Armoury assistant can be summoned anywhere current assistants can be called; outside combat, PvP areas, and Arenas.