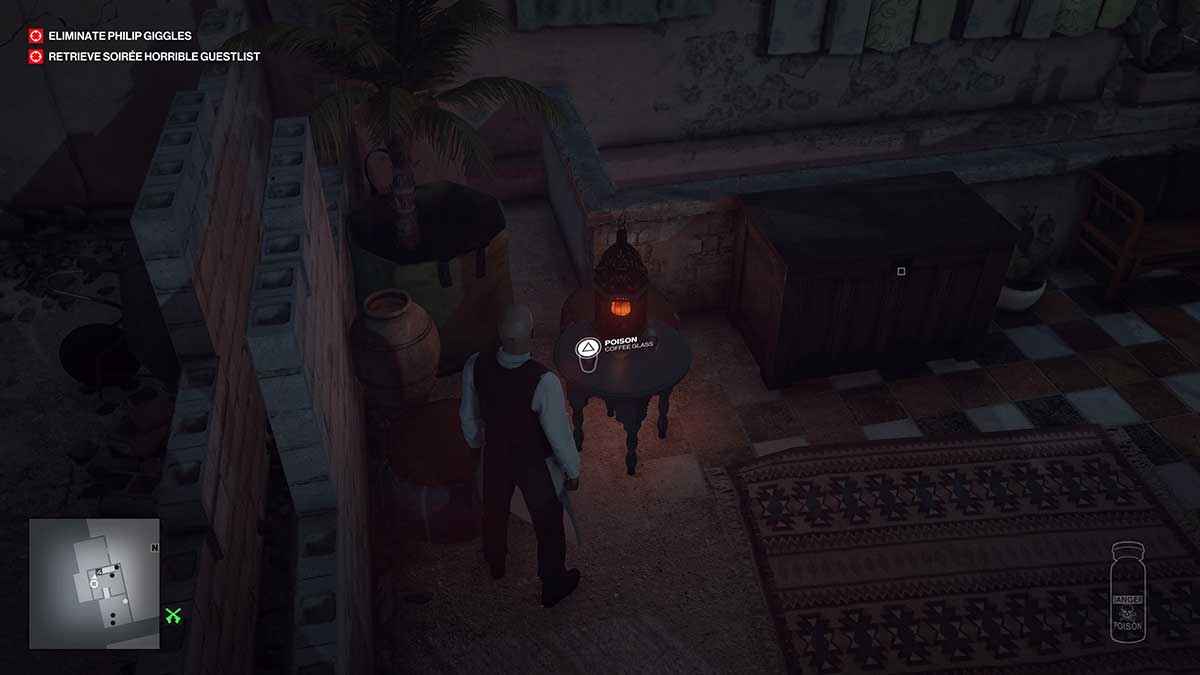 The Entertainer is an Elusive Target that was added in the 2016 Hitman game but has now returned for another round in Hitman 3. It ties in with the free period for the nighttime Marrakech location, meaning any Hitman 3 player can take this Elusive Target down from August 20 to 30. This guide covers how to complete the mission with the rank of Silent Assassin.

As with all Elusive Targets, you only get one chance to complete this mission. As soon as you start completing objectives, which counts as either killing Mr. Giggles or collecting the Guest List from Marrakech, the option to restart is removed. Instead, we recommend following the route through at least once without collecting the Guest List or killing the target so that you get a good feel for it. Then, after some practice, you can take it on for real and understand where the toughest parts are and how to overcome them.

The loadout for this route is as basic as it gets. You don’t need any equipment that you’d have to unlock elsewhere in the game. We’ve kept things as simple as possible — the only thing we recommend bringing is a lockpick. This route is also far easier if you don’t bring a pistol because it means you don’t need to go somewhere to drop it before getting frisked. The suit we’ve gone with is one you get for completing Dartmoor Garden Show.

Take this poison and head left out of the shop. You’ll see a woman who moves between a store with a locked door and a water bottle. See below for a map reference for this NPC.

When she’s away from her water, drop the emetic poison in it. This will ensure that she heads to the toilet later on in the route when we can get the key from her.

Step 2: Get into the party

Now it’s time to enter the party in the sheesha cafe. First, you’ll need an invite, so head over to the window at the back of the bar near this location. Use the map reference below to help you find it.

As soon as the waiter walks over to his drink, you can vault into the bar, grab the card that’s lying on the table back here, and keep moving forward to get out. Now you’ve got what you need to get in. While you’re here, run over to the right-hand side of the cafe’s opening to pick up some truck keys from a table — these are for later.

With the invitation in hand, you can walk up to the bouncers outside the cafe, get frisked, and walk in without anyone batting an eyelid.

Once you’re inside the cafe, you need to use the lockpick on the staff room door to your right as you enter. Inside, you can pick up a waiter disguise that you’ll need for the rest of the run. If you don’t have the lockpick, you can run to the bathroom on the opposite side of the cafe to get one. Turn on the radio here until the waiter is distracted, then turn it off. Hide inside the crate until the waiter investigates, at which point, you jump out and subdue them. Now you can hide their body and use their disguise.

In the bathroom near the radio is some emetic rat poison. Pick it up and take it to the bar. You need to poison the drink on the left-hand side of the bar. The NPC with the Guest List is going to drink this and head to the bathroom shortly after.

While you’re waiting for this NPC to drink her poison, run outside of the cafe through the same opening you entered. To your left is another bathroom. At this time, the woman you poisoned earlier should be inside puking her guts up. Subdue her and hide her body in the crate. Pick up the key that she drops, because you’ll need that.

With the key in hand, head back to where the woman was when you poisoned her. The key you picked up will allow you to open the door to the shop and pick up some lethal poison from inside. If you’d rather skip poisoning her altogether, use the lockpick to get into her shop when she isn’t looking.

Now you need to get into the cafe again. As a waiter, you don’t need to show an invitation. Wait for the NPC to drink the poison and head to the bathroom. Once she’s inside, subdue her and hide her body. Make sure you pick the Guest List up from the floor where she’ll have dropped it. Alternatively, you can leave the Guest List here, complete the rest of the mission, and come back for it when you know the risky part is over.

To kill the target, you need to run over to the shop where he’s having a meeting. The shop is guarded and locked, but you can still make your way inside. First, run to the shop’s location on the map below.

You need to get frisked by the guards and then wait whilst standing awkwardly against the door until an NPC comes along to open it. Once the door is open, you can go inside without anyone looking at you suspiciously.

Next, go upstairs. There’s one NPC up here who can see through your disguise, so watch out for them. There are two glasses on a small table on the lower part of the roof. You need to poison the one on the left with lethal poison.

Now, you have two choices. You can either run downstairs to the truck and wait for the exit to activate, or you can hang around and watch Mr. Giggles die. There’s some good dialogue if you want to listen to it, but if not, then go downstairs. As soon as the target is down, the exit will activate, and you can leave.