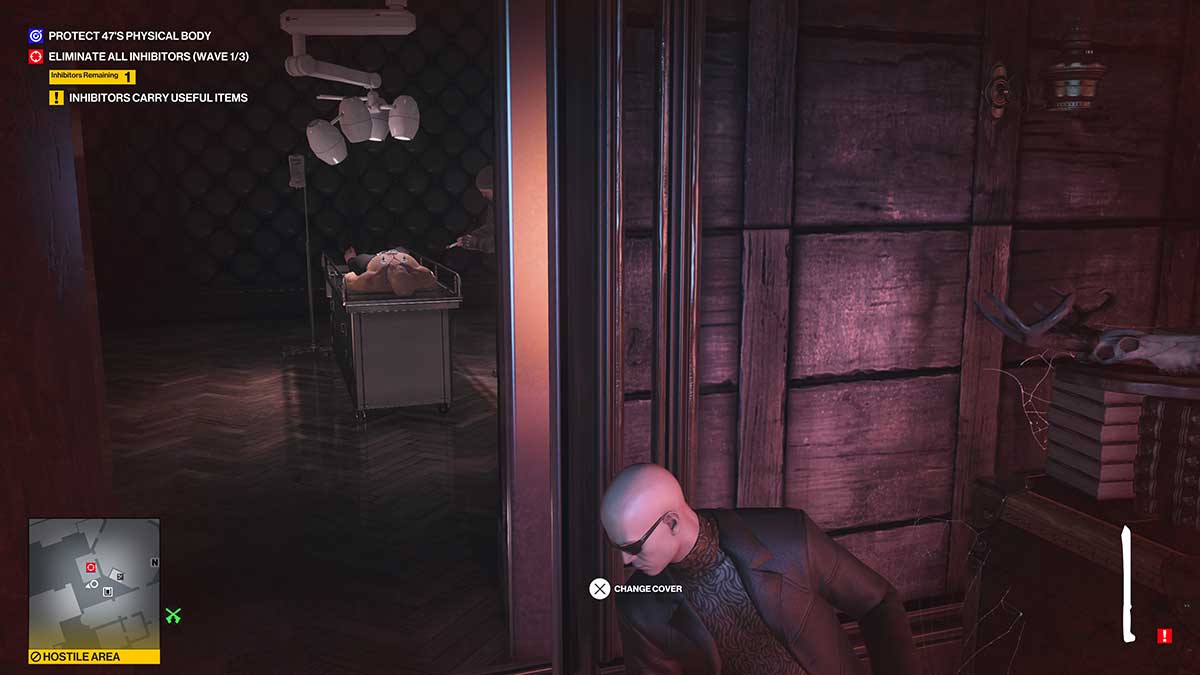 The Wrath Termination is the final new Escalation to be added to Hitman 3 with the Seasons of Sin Collection. It’s a very different type of Escalation and requires you to play Hitman 3 in a way you won’t be used to. This guide covers some tips and tricks for completing the Escalation with a rank of Silent Assassin.

The gimmick with this Escalation is that you’re facing off against waves of enemies who are hunting Agent 47. However, it’s a secondary Agent 47 that you’ll be controlling, meaning that you need to protect a physical object in this mission. You can’t pick up disguises from enemies and killing non-targets doesn’t affect your scoring. The loadout for this Escalation is restricted, so there’s no advice that we can give you to help you out on that front. However, there are items littered around the revamped Dartmoor map which help you kill the incoming waves of enemies. These are the tools you’ll have to work with to maintain your Silent Assassin rating.

The only way you’ll get a rank of Silent Assassin in this Escalation is by killing every enemy that appears on the map. Each Inhibitor target will be accompanied by an entourage of guards, but you’re only required to kill the targets. However, any time one of these NPCs sees a body, your Silent Assassin rank will be compromised. After the final NPC is killed, though, it will be restored.

The key to succeeding in this Escalation is picking up everything in sight. You’ll need as many lethal melee weapons as possible to help you kill enemies from afar, but it doesn’t hurt to have a few options so that you can subdue a target or their guards if you have nothing else. The more items you have at your disposal, the better, so raid every hidden stash and pick up all the items you see around the mansion. There are plenty of lethal melee items for you to find, so seek them out.

Make the most of traps in Levels 1 and 2

The first two levels of this Escalation are great for getting a few kills with traps. Pick up the screwdriver at the start of each level and use it to puncture the water containers around the map. Then, use the plentiful fuses from hidden stashes and other locations to electrify them. There are also a few car batteries around the map, which you can use to electrify the water if fuses aren’t an option. We recommend making a trap with the hosepipe at the back of the house because that always kills a guard. The two water coolers on the first floor are also guaranteed kills. If you camp out by the one in the corridor, then you can get multiple kills.

You can also use a wrench on the gas canisters in Level 1, but we didn’t find them as useful in Level 2. Electrocuting enemies was much more satisfying and easy to reset, providing multiple kills from each wave rather than a single kill.

The stairs to the third floor are where every Inhibitor will run. While we recommend you kill them on the ground or first floors as quickly as possible, it’s also a good idea to booby trap these stairs just in case. Place a propane tank midway up the first flight, and you can even pick up a proximity mine to arm here if you want. Ensure that you trigger the proximity mine before you run up the stairs at the end of the Escalation, though. By placing a trap on these stairs, you’ll ensure that no Inhibitor makes it up there, which will help you complete three challenges for this Escalation.

Jump out of the windows when things go south

At times, it’s better to take the enemies out head-on. However, this can lead to a gunfight. When this happens, find the nearest window and vault out. While you’re hiding outside, the guards will search and eventually reset their patrol patterns. This way, you can get in and take them out individually rather than as a group.

Let yourself be seen

This is a Hitman 3 Escalation, but that doesn’t mean that you should treat it like any other mission in the game. The goal here is to kill every target before they reach your physical body. To do that, you need to distract them from their goal. Allowing yourself to be seen and causing a few gunshots will disperse the guards and cause them to move all over the place, but they won’t go straight for your body. While this puts a lot of pressure on you to kill them fast, it’s worth it to know that you don’t need to worry about that last Inhibitor running up the stairs to cause you to fail.

As soon as you’ve killed all the Inhibitors in a wave, the next one will start counting down. This leaves you with a few seconds to kill the rest of the guards and prepare new traps. We found that subduing an Inhibitor by throwing a hammer or similar melee weapon at him at the start of the wave allowed us enough time to kill everyone else and plan for the next wave accordingly. Inhibitors drop rusty nails, or crowbars once knocked down, so you can still get all the new equipment you need and reset every trap once you’ve taken everyone else in the mansion down.

By completing this Escalation, you’ll unlock The Roar Flash Grenade, The Shashka Beast assault rifle, and The Temper Suit.