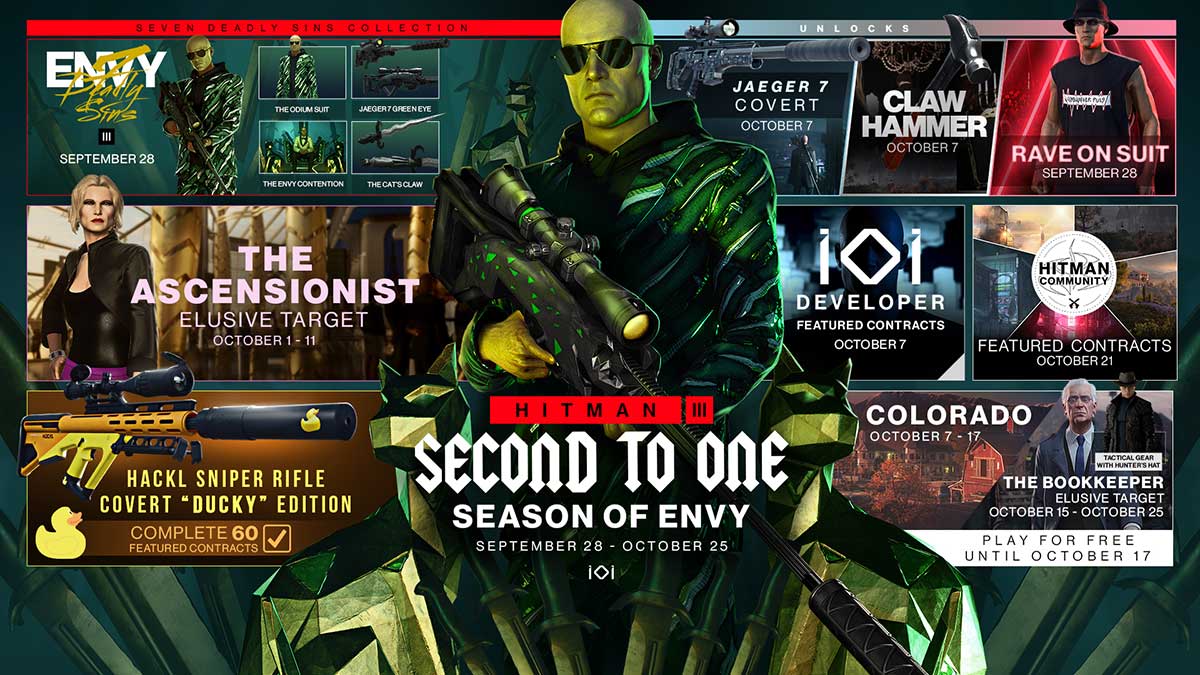 IO Interactive has released the roadmap for Hitman 3 Season of Envy, showing all the new content coming to the game this season. Season of Envy feels like the biggest expansion in the Season of Sins Collection so far, packed with more new missions, unlockable rewards, and much more than any other DLC for the game has brought with it this year. This guide covers everything that’s coming to the game between now and October 25 in date order.

Today a brand new Escalation will be added to Hitman 3: The Envy Contention. The Escalation tasks players with killing another assassin’s targets before they do in the way that Envy itself defines. For completing this Escalation, you’ll unlock The Odium Suit, the Cat’s Claw Knife, and the Jaeger 7 Green Eye Sniper Rifle.

The Rave On Suit, locked to The Lesley Celebration Escalation, a piece of Hitman 3 Deluxe Edition content, is now available to all Hitman 3 players. You can unlock the suit by completing a new challenge in Berlin.

Elusive Target The Ascensionist: October 1 to 11

The Ascensionist is this season’s new Elusive Target. Set in Dubai, players must take out a con artist trying to work their way to the top of the social ladder. As always, you’ll only have one chance to take this target down, so use it wisely.

Play for Free Colorado: October 7 to 17

This season’s free location is Colorado from Hitman 2016. The location has several targets for players to assassinate, and the free period coincides with the second Elusive Target for Season of Envy. However, you’ll only have a couple of days to take them out, so do it quickly if you don’t want to purchase the location.

A new challenge will be added to Dartmoor during Season of Envy that allows players to unlock the Claw Hammer, a non-lethal melee weapon, for their inventory permanently.

In Berlin, players will unlock the Jaeger 7 Covert Sniper Rifle by completing a new sniper-based challenge from October 7. This will add the weapon to your inventory permanently.

A new reward for completing 60 Featured Contracts will be added alongside IO Interactive’s batch. The Hackl Sniper Rifle Covert Ducky Edition is the ultimate reward for dedicated Hitman 3 players.

Elusive Target The Bookkeeper: October 15 to 25

The second Elusive Target this season is The Bookkeeper. He’s coming to Colorado and requires players to kill him and steal his ledger. This won’t be an easy target to take out with a Silent Assassin rating, so it’s worth getting as much practice in as possible before he arrives. By taking him out, you can unlock the Tactical Gear With Hunters Hat suit for your collection.

The Hitman community will be adding three new Featured Contracts based on the theme of envy towards the end of the season. IO Interactive has challenged players to make them as difficult as possible to make the rest of the community envious of their skills.