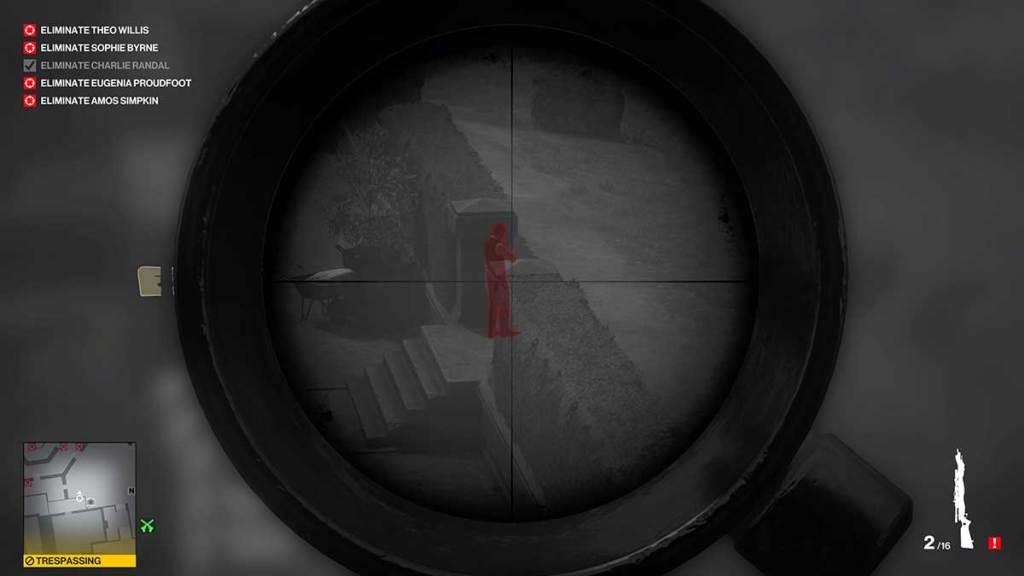 While getting to a balcony and therefore having a fun time with a sniper assassin run in Dartmoor Garden Show, seems impossible, we’ve found a workaround. Certain modders have hacked the mission and created hard as nails Contracts perfect for sniper assassin runs. The Contract this guide is based on requires a very specific code on each platform. To search for it, open the Contracts menu, select the Contract Lookup option, and type in the relevant code for your platform from the codes below.

This should bring up the Contract. Then, all you need to do is select it, plan accordingly, and play.

We recommend quite a specific loadout for this Contract. Obviously, you’ll need a sniper rifle, so select a briefcase and your favorite one. We’ve opted for the Majestic sniper rifle, which is a reward for completing The Pride Profusion. You’ll also need the Remote Emetic Gas Device and a remote distraction too, preferably the ICA Remote Audio Distraction Device. Put this in the Deliveries location for you to pick up in the mission. Finally, put Agent 47 in a snazzy suit, and start the mission.

The first thing you need to do from the starting location is head right at the main entrance for your smuggled item. It should be floating in midair near the vans on the right-hand side of the mansion. This is because the Contract is a hacked version of the mission. Once you have this, go down the staircase and turn back on yourself to pick up the emetic rat poison. Below is a map reference for the rat poison.

Now make your way to the ladder. This is the shortcut that’s usually unusable in this mission. Below is a map reference for the ladder.

Retrieve your sniper rifle from your briefcase at the bottom of the ladder and then climb up. This will lead you to the balcony that overlooks the garden show below and pretty much every target that you need to kill.

Your first target is the photographer that you can see off to the right. She’ll be taking pictures of another woman for the duration of the mission unless you cause a distraction. Look at the pair through your sights, then move down and to the right. You need to shoot the ground at a point that’s further away from where the pair are standing, but not so far away that they won’t notice it.

Once the woman in white has walked away and is standing looking in the opposite direction, shoot your target in the head. This should kill them and cause them to fall into the river, hiding the body. The other woman will go back to standing around as if nothing has happened.

The second target you need to kill is a waiter who will stand and smoke at the edge of the hedge maze. To kill him, you need to draw him into the bushes in front of him. As with the first target, fire a shot into the bushes close enough for him to hear. If he does, he’ll walk over to the bushes to investigate the noise. Once he’s standing in the bushes, shoot him in the head to kill him and hide the body simultaneously.

Now turn your attention to the second pair of NPCs you can see by the river, one of which is a target. The man is the target, and the woman will notice if you shoot him without distracting her first. As with the first target, shoot the ground to the right of the pair. This should draw her away. Then, when she’s not looking, shoot the man in the head, and he’ll tumble into the stream and disappear. We found that occasionally the man decided to investigate our shot instead of the woman, so make sure that your shot isn’t too close.

Your third target is more complex than the first two. Drop your sniper rifle on the balcony. You’ll return for it later. Go down the ladder and make your way over to the greenhouse, where your third target is smoking unhelpfully close to a potential witness.

You need to place your distraction in the bush closest to the target. Then, make your way back to the balcony and pick up your sniper rifle. Now aim down the sights at the pair and trigger the remote distraction. This should draw the man’s attention, who will walk off to get some guards to come and pick it up. Wait for this to happen. Then, shoot the ground near the man a couple of times to scare him, and he should run off. Make sure you don’t do this too close to your target. Otherwise, she’ll run off too.

Once the man is gone, shoot the ground in front of the bush nearest your target. It has to be pretty close because she seems to be hard of hearing and doesn’t hear any shots that don’t almost hit her. When she walks over to investigate the shot, shoot her in the head, and she should cartwheel into the bush, hiding her body.

We recommend going down once again to double-check that the body is hidden. In one of our attempts, the target’s legs were sticking out the back of the bush, and the body was discovered as a result. This can be remedied by dragging the body further into the bush.

This last kill has more setup to it, but it’s relatively easy to pull off. Leave your sniper rifle on the balcony once more and head down the ladder. Put the Remote Emetic Gas Device in the briefcase. This will leave you with the remote to trigger it. Pick up the briefcase and make your way to the nearby garden crated by Gulshan Yazdani. He’s the potential target from the main mission that wears a pink suit.

Pick up a screwdriver and throw it to the left of the entrance to his garden. Now head left around the back of it and then take the entrance to the right, where a gardener is trying to fix a lawnmower. Make your way over to the shisha pipe, where there shouldn’t be anyone around to see you. Poison the shisha pipe with the emetic rat poison and then go to the toilets around the back of the garden again.

Wait for Gulshan to sit down and take a drag on the shisha pipe. When he does, he’ll feel sick and go to the toilets to vomit. As he rounds the corner, hit him in the head with your briefcase, then you can hide his body in the nearby shredder, but do not shred him.

With Gulshan out of the way, you can finally take out your target. Pick up your briefcase and make your way over to the final target, a housekeeper. Trigger the Remote Emetic Gas Device and it will spray green gas around her. This should make her feel sick and head to the same toilets Gulshan wanted to vomit in. Run to your sniper rifle as quickly as possible.

You should be able to watch the target walk to the toilets. We found that she glitched out at one point, walking as if she wasn’t going to be sick, but then the correct icon popped up above her head. Regardless, she will make her way to the toilets. Wait for her to approach the toilet with the open door. She’s going to move around it so that she can be sick, but this also blocks her head. Shoot her before she’s hidden by the door to get the kill.

With the final target dead, you can exit the mission. If you’re worried, you can head down and drag the target’s body out of view a bit more, but as long as you’re fast, it won’t be discovered. The boat exit will offer slightly more XP, but the nearby bridge exit is faster.