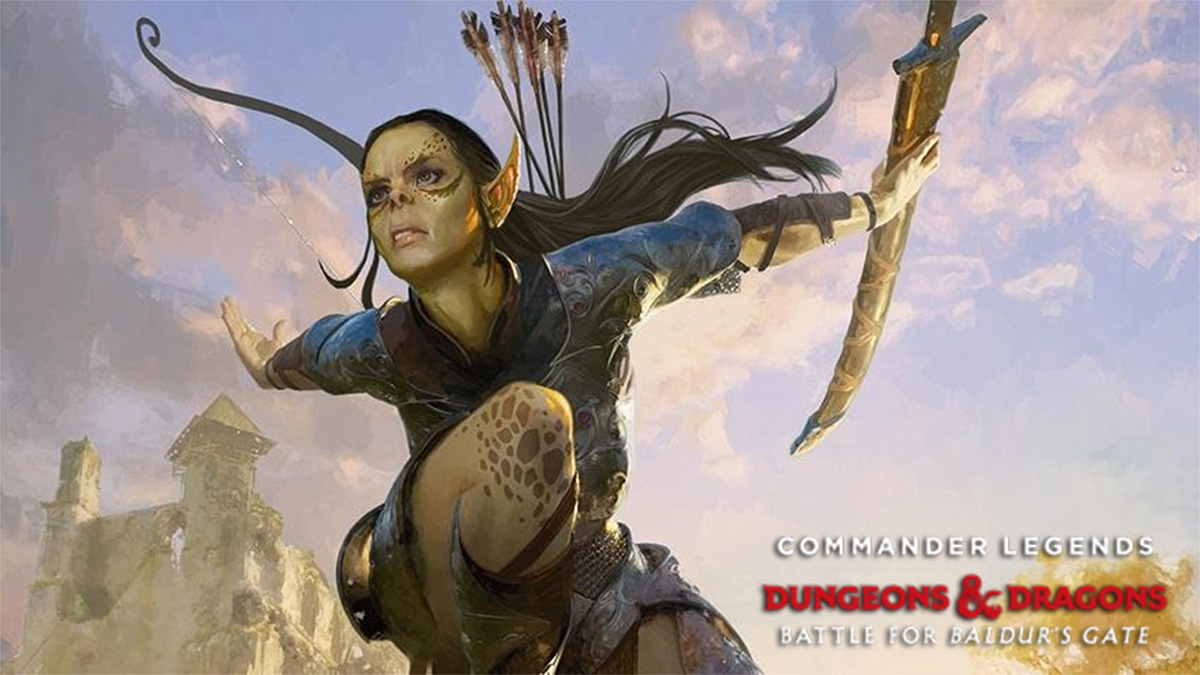 Wizards of the Coast have recently unveiled their latest card set — Dungeons & Dragons crossover featuring many fan favorites. The new card set is Battle for Baldur’s Gate and is centered around the Commander format. Let’s look at this new card set, how to play the draft Commander format, and where to purchase this iconic new set.

This new card set, Battle for Baldur’s Gate, takes place in Baldur’s Gate — one of the most iconic locations from Dungeons & Dragons, the Forgotten Realms. The set features many well-known D&D characters, which have come in the form of creatures and spells. The set contains 361 cards that have been released, and some of these cards include the return of Rulebook frames and Borderless frame cards.

How to play Draft Commander

This new D&D inspired set is specifically designed to be played in the Draft Commander format. Commander is a format where three to five players battle it out in a free for all style of gameplay. Each player has 40 Life Total, and the last player standing wins. Each turn, the player chooses who to attack. You can also attack multiple people per turn. It’s a format where friends can be made or enemies made from friends. Ganging up on one person might help you in the short term, but you might also be turned on at the last minute.

Draft Commander format is played with four players. Participants work together or against one another to build your deck before you play. To play draft format, you’ll need three draft booster packs per person (12 packs). You can also play draft format by taking 240 cards and randomly splitting them evenly into piles of 20. Each group of four players will also need one box of land cards. Since this is a D&D crossover, you’ll probably need some D20 dice too.

Start the draft process with each player breaking open one draft booster pack each. Players take two cards from that pack and then pass the set on to the next person. Repeat this process until the whole pack has been depleted. Do the same with the next two packs. Each time you open a pack, reverse the order in which you pass on the cards. By the time each player finishes, they should end up with 60 cards each. Next, each player will need to make a deck of 60 cards, including land cards.

Each deck needs to contain one Commander and a good number of land cards that will be used for mana. It’s recommended to have 35 creature/spell cards and 25 land/mana cards. You can play with 40 creature/spell and 20 land/mana cards; however, this will reduce your chances of receiving mana.

When doing the draft process, you’ll want to ensure you have at least one Commander card. You can’t play without a Commander. Try and get your Commander as early as possible in the process and then build your deck around that. As you’re going through drafting, think about the type of deck (i.e., color) you want to build and try to collect cards of that color that work well together. You will collect a total of 60 cards, so don’t be worried if you have a few odd cards that don’t fit. You’ll be able to leave these out when you build your deck.

Battle for Baldur’s Gate also includes a unique new rule by allowing players to have two or more of the same card in their deck. Don’t be afraid to stack your most powerful cards.

If you’re playing a more friendly style of Draft Commander, players could announce the type of deck they are trying to build and choose different colors from one another. That way, you can help each other find good cards. If you’re super competitive, you’ll want to sabotage your enemies by also deliberating taking their colors so they can’t build a good deck.

At the end of the drafting process, depending on the friendliness of the game you are playing, you could also enter a trading phase where you trade with your ‘frienemies’ to get the cards you want.

Bringing the D&D roleplay to life, Battle for Baldur’s Gate includes a new mechanic called Background. This is an enchantment designed to give your Commander a bonus, usually in the form of power or toughness. The enchantment is also a call back to the Commander’s story in D&D.

Initiative is another new mechanic, a keyword ability that gives players three bonuses. First, when a player uses (or takes) initiative, they venture into Undercity, receiving this new dungeon card. Next, the player with initiative continues to venture into Undercity at the start of every turn. Finally, many cards in the Battle for Baldur’s Gate set are more powerful if you have initiative active.

Where to buy Battle for Baldur’s Gate

You can use the Wizards of the Coast website to find your closest game retailer, or you can purchase cards on Amazon.