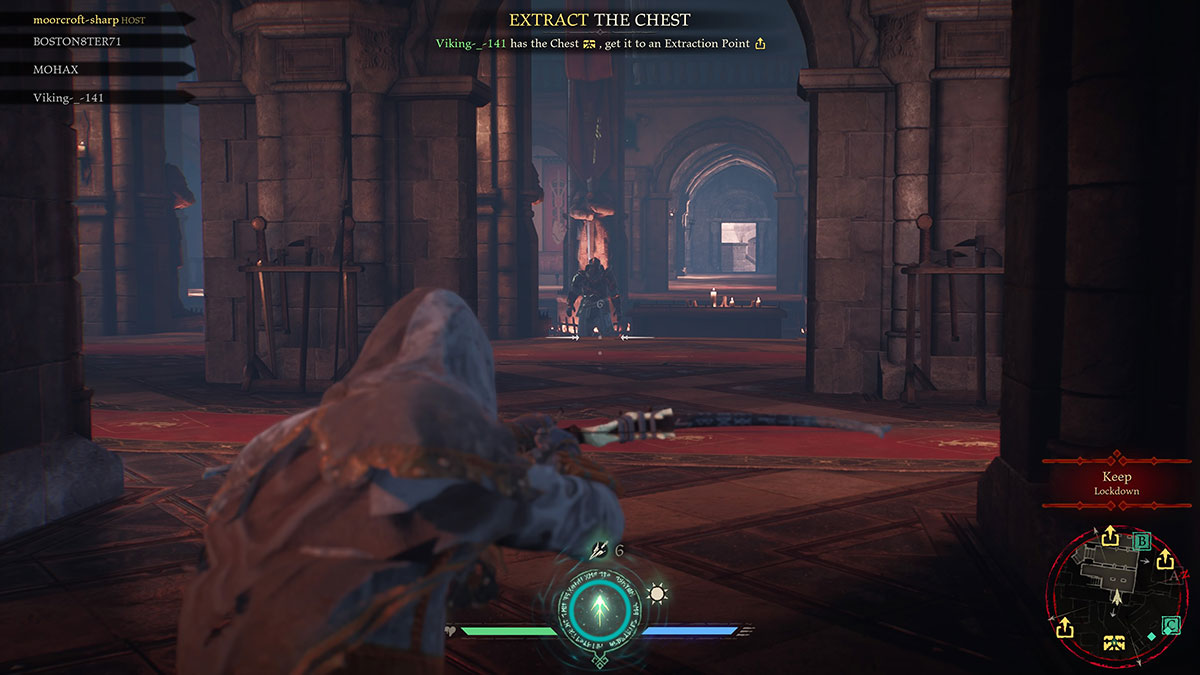 If there’s one thing that can ruin your chances of earning gold in any given match in Hood: Outlaws & Legends, it’s the Sheriff. This behemoth of an enemy isn’t controlled by any player, meaning everyone is at risk from his instant kill melee attack. It’s at the end of a match when he becomes the biggest issue, though. This guide will cover some tips that we’ve found for keeping the Sheriff at bay, distracting him, and sometimes outright defeating him in the name of earning gold.

What is the Sheriff?

The Sheriff is a character based on the Sheriff of Nottingham from the Robin Hood folk tales. Unfortunately, while he’s about as good at keeping his gold under lock and key, he’s a much more powerful adversary than the bumbling fool those tales would have us believe. This enemy stalks the map, keeping an eye out for Robin and his gang. You can feel his power as he walks past your while you’re hiding. His footsteps shake the ground.

The Sheriff holds the key to the Vault. Stealing it is the easy part because the Sheriff is only concerned about what he can see. Once he’s aware of you though, he’ll pursue you relentlessly. If he manages to corner you or grab you, he’s capable of killing any character, even if they have full health. The Sheriff is also invincible to top things off, though he does have a health bar of his own.

How to kill the Sheriff

While you can’t ever kill the Sheriff, you can down him and remove the danger he presents for a short time. Robin’s explosive arrow ability will down this enemy and leave him panting on the ground for around 30 seconds. During this time, you can run away from him or continue to winch the gold out of the map. You can also down the Sheriff by chipping his health bar all the way down. His armor is so thick that you’d need all four characters hitting him at once, though. For those that have to get up close and personal and within range of the Sheriff’s lethal melee move, this is a recipe for disaster.

The best option for killing him without Robin’s special ability is to have the Mystic and Hunter hit him with their long-range attacks. Robin should also help out, but since he has limited ammo, this may not be the best move if you want to extract the gold yourselves.

How to distract the Sheriff

The Sheriff becomes a huge issue in the final stage of every match. He becomes aware that his gold is being stolen and rushes out at a brisk walk to stop you. At this point, he’ll head directly for the players winching the gold. It doesn’t matter if you’re slapping him from behind — he’s only concerned with stopping his gold from leaving the area.

Any players that are winching at the time should stop when the Sheriff comes too close and move off to the side. But not too far, though — you want to move away just enough that the Sheriff will still pursue you. If you can, tease him with a few long-range attacks to maintain his attention. In the meantime, other players can jump in and take over the winching.

You can also distract the Sheriff on his route to the winch. If you get close to him and his entourage, you can pull them off the optimal path, delaying their arrival. This gives your team more time to winch gold without the armored giant to worry about.

How to use the Sheriff as a weapon

Sometimes, a match just doesn’t go your way. The enemy team may be too well coordinated for you to compete with. However, all matches have the same final stage. Each team still has to winch the gold, meaning that they’ll be clustered around the winch. The best tactic at this stage is to have two players winching and two players protecting those winchers, swapping in and out as stamina drains. You can use this to your advantage.

Other players will distract and down the Sheriff because they want to extract the gold. You can throw a spanner in the works and prevent them from doing this, though. If you see the Sheriff approaching you, head towards the winch. This will draw the Sheriff in and subsequently force the enemy team to fight him or distract him.

Stay close to the Sheriff as you steal the Chest

This final tip is completely counter-intuitive. As soon as your team has the Chest from the Vault, your only goal is to get it to an extraction point as fast as possible. Any state enemies who see you will attack you on sight. The character carrying the Chest can’t attack, so it’s down to other players to protect them. If the Sheriff is too close at this point, it usually spells doom for your team. There’s another way to look at this situation, though.

By sticking close to the Sheriff as you move the Chest to the extraction point, you’re ensuring that there’s always a group of tough state enemies to tackle around you. Any enemy players would be mad to try to take you down and steal the Chest while the Sheriff and his knights are around. That’s exactly what they’ll have to do if you stick close to this enemy, though. It creates a buffer around you that might even keep the enemy team off your back as you move the final stage of the match and start distracting the Sheriff.