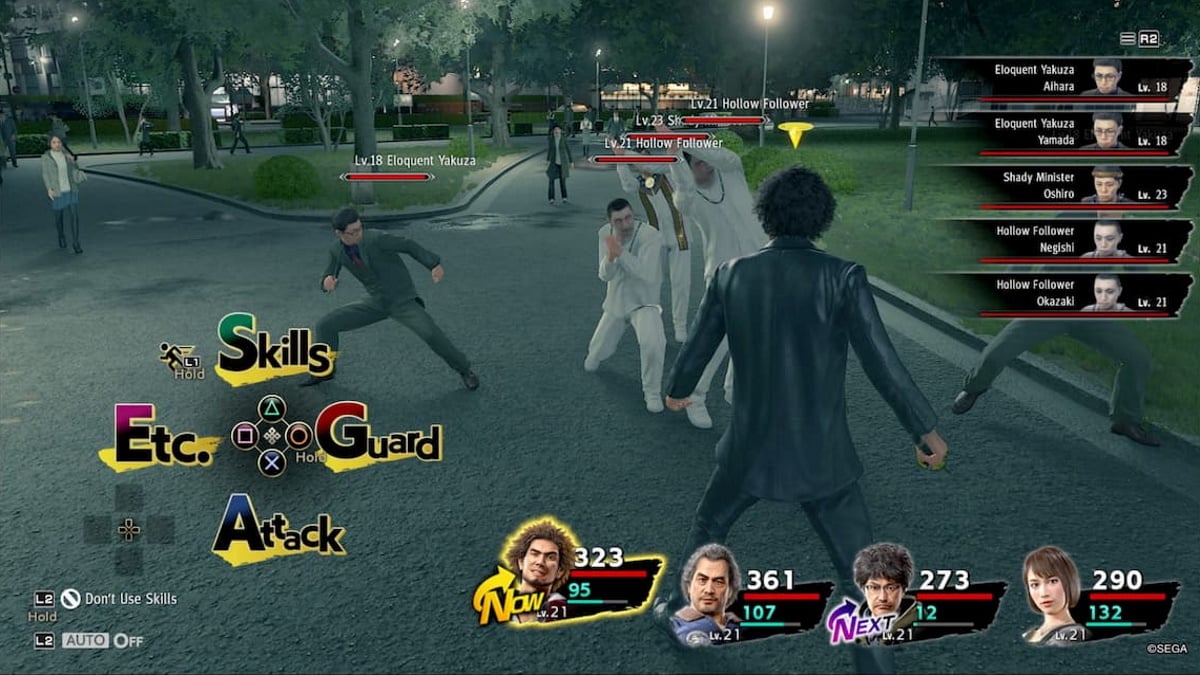 Unlike the traditional Yakuza games, Yakuza: Like a Dragon features a turn-based combat system. The main character, Ichiban Kasuga, has several party members with him that he meets and adds to his campaign. Usually, Yakuza is a beat ‘em up fighting game where you fight foes you encounter while wandering around the world, and button mash them using various combos. Like a Dragon works differently as an RPG, and because it’s turn-based.

Every battle has the same layout. You and your party members are listed on the bottom right part of the screen, and your opponents on the top right. The person who’s turn it is will have a “Now!” symbol next to, and the person who is coming next will have the “next” symbol next to their name. If it is the opponent’s turn, they will dash at one of your party members, perform an attack or a skill move against them. The party member being attacked has the chance to guard the attack to take the least amount of damage, also known as a perfect guard. Your character can potentially dodge the attack.

When it is one of your party members’ turns, you can perform four actions: Perform a regular attack, use a skill, use an item, or guard.

A regular attack will be a basic combo that your party member can perform based on their job. You can potentially have your party perform combos if one of your characters knocks an enemy down, and then your next character uses a regular attack against them while they’re still on the ground. This combo will do quite a bit more damage than a regular attack. You will know you hit it when the damage that floats up is yellow.

A character’s skill is also up to their job, and these typically require MP to use any of them. A character’s skills can damage an enemy, provide a beneficial boost, cause a negative status effect to enemies, or even heal other party members.

When you want to use an item, it will replenish your character’s health, replenish their MP, remove a status effect, or give them a status bonus. After you use the item, that is the end of that character’s turn. It’s a good idea to use this option only if they really need the health or to have a status effect removed.

The final option, guarding, protects your character from an incoming attack. You want to use this option when battling bosses or to protect a character who has deficient health.

While fighting, the main character you are controlling won’t actively move around. You won’t be able to position them in a better location or have them flank. Instead, they remain in a single spot, and you have to change who your character is attacking to go after a certain person. You want to make sure you don’t have an enemy between you and your target. If you do, the enemy standing between you two can perform an opportunity attack against you, preventing you from attacking and forcing the next character to go. Make sure to attack the nearest enemy to avoid this.

Completing combat rewards everyone in your party character and job experience. A character can be a higher level than their job if they recently picked up a new one. If you want to grind experience for your characters, running around locations with high threat levels will give you more difficult opponents. Still, there’s a higher risk of battling an enemy that far surpasses your party’s level. Make sure to run away if an encounter is not going well for you. If you fall in combat, you lose half of your yen.