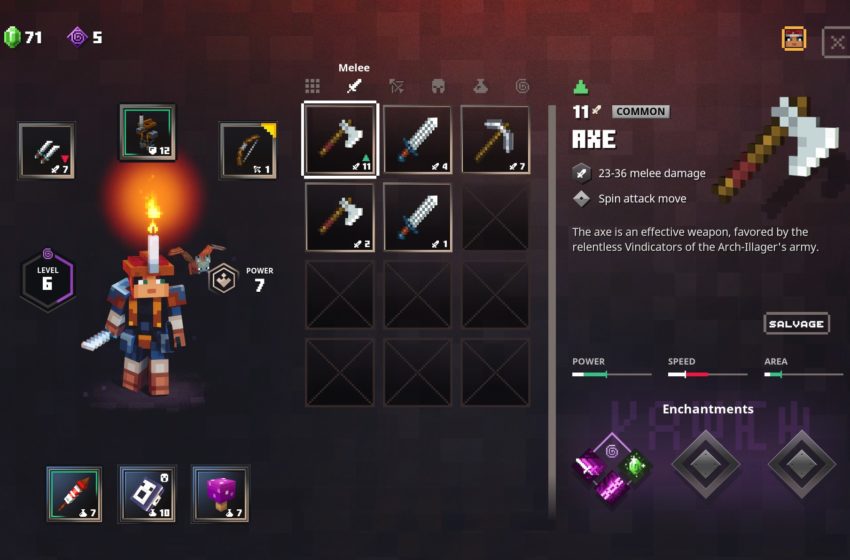 Your gear power determines how strong you are in Minecraft Dungeons. The higher level gear power you have, the harder missions you can embark on with friends, giving you access to even higher-level gear. It’s a process you rinse and repeat throughout the entire time you play Minecraft Dungeons, gaining enough gear to play the game at a greater difficulty, fighting stronger and more powerful enemies.

Your gear power is the average total of your three gear slots and three artifact slots, divided by six for the total slots you have available. For example, your absolute gear power can equal 44, but when you divide it by six, that totals out to roughly seven, which is your overall power rating. A single item on your character can bring your entire score down, so you want to try to keep your weapons, armor, and artifacts close together in terms of power.

For example, if you have a legendary weapon that is a power of four, and all your other gear has exceeded that, it might be time to find a new weapon. This becomes the case closer to the end of your Minecraft Dungeon game. Plus, you want to try to raise your gear power as often as possible to ensure your increasing your chances of obtaining higher quality loot, which means having more opportunities to find rare and legendary items.

Minecraft Dungeons is all about having the best loot. The stronger gear you have, the more you can play the game, and the more ridiculous your powers become as you have to fight off a variety of powerful enemies and bosses.