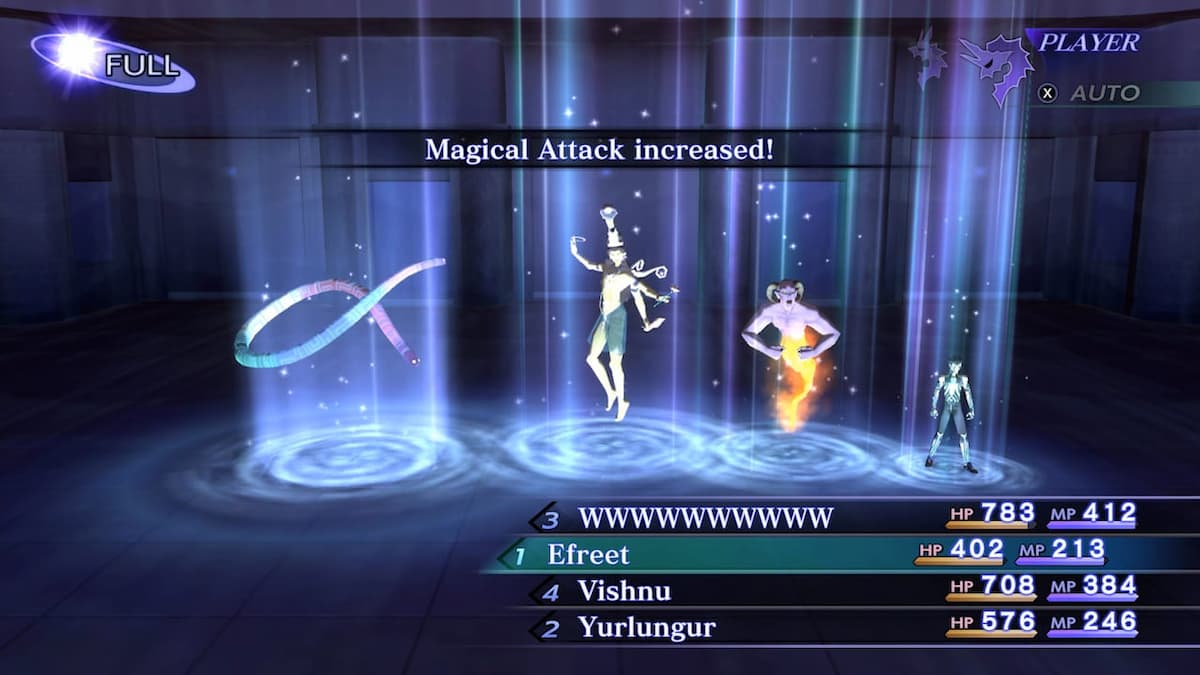 The original Shin Megami Tensei III Nocturne debuted the Press Turn system, which moving forward would become the trademark battle system for the franchise. Naturally this is the system that its HD Remaster uses. It’s simple yet intricate, offering myriad strategic options for players to best powerful foes. But starting players might be overwhelmed by its depth, which is why it’s important to understand and master the fundamentals of the system.

In the early Megami Tensei games, the player would set all commands for the party. Once the round begins, both allies and enemies enact their actions based on Speed stats. But Shin Megami Tensei III: Nocturne took inspiration from the Majin Tensei and uses a round-robin style of combat — the entire player party acts first and then the enemy party. However, the introduction of the Press Turn fundamentally changed how the battle unfolded.

In the Press Turn system, you start with the same number of turns that match the number of party members, maxing out at four. The same, of course, goes for enemies, except that they have a higher upper limit. Each time a party member successfully targets a weakness or scores a critical hit, you gain a bonus half turn (more on the difference between a full and half turn later), with eight total turns being the maximum. By virtue, players can completely wipe out an enemy encounter, deal significant damage to a boss, heal, and buff or debuff all before the opposition can get a single turn. Conversely, the enemy can do the same to you.

Just as you can gain turns as a reward for successes, you can also be punished for poor decisions and bad luck by losing turns. If an enemy voids or dodges an attack, you will lose two Press Turns. And if an enemy absorbs or reflects an attack, you will lose all of them. You will also lose a turn if you fail in demon negotiation in any way. This makes skills that boost and lower hit rate/evasion especially valuable, as it can allow either side to completely control the flow of combat. In other words, buffs and debuffs are vital for influencing and mastering Press Turn.

It’s also important to note that exploiting weaknesses and landing critical hits is the only way for the player party to gain Press Turns. However, in true cheating AI fashion, there are several skills that enemies can use to increase their turns — Beast Eye, Dragon Eye, Hell Throttle, and Startle, for instance. When it comes to taking down these tricky foes, it’s best to ensure they have as few turns as possible.

The difference between a full turn and a half turn comes into play when one skips turns. Even something like skipping turns has strategic significance in Nocturne. Sometimes a demon simply has nothing useful to do, and having them act would simply be a waste of a turn. Maybe skipping a turn now can be an investment to a later setup that will net you more turns and allow that demon to freely perform their necessary actions. If you have a full turn, it turns into a half turn that can still be used next with no waste. However, if you skip on a half turn, then that turn is gone. So players must use their turn skips wisely and plan.

Finally, remember that if attacking multiple enemies at all, the worst result will always take priority then the best result. For example, if you attack three enemies with an ice skill and two enemies are weak to it while the third reflects it, the player will still lose all their Press Turns. However, if you have the same setup but the last enemy takes normal ice skill damage, you will gain a Press Turn. Press Turn loss is not cumulative either, so if you target three enemies and two dodge, you will still only lose two turns.