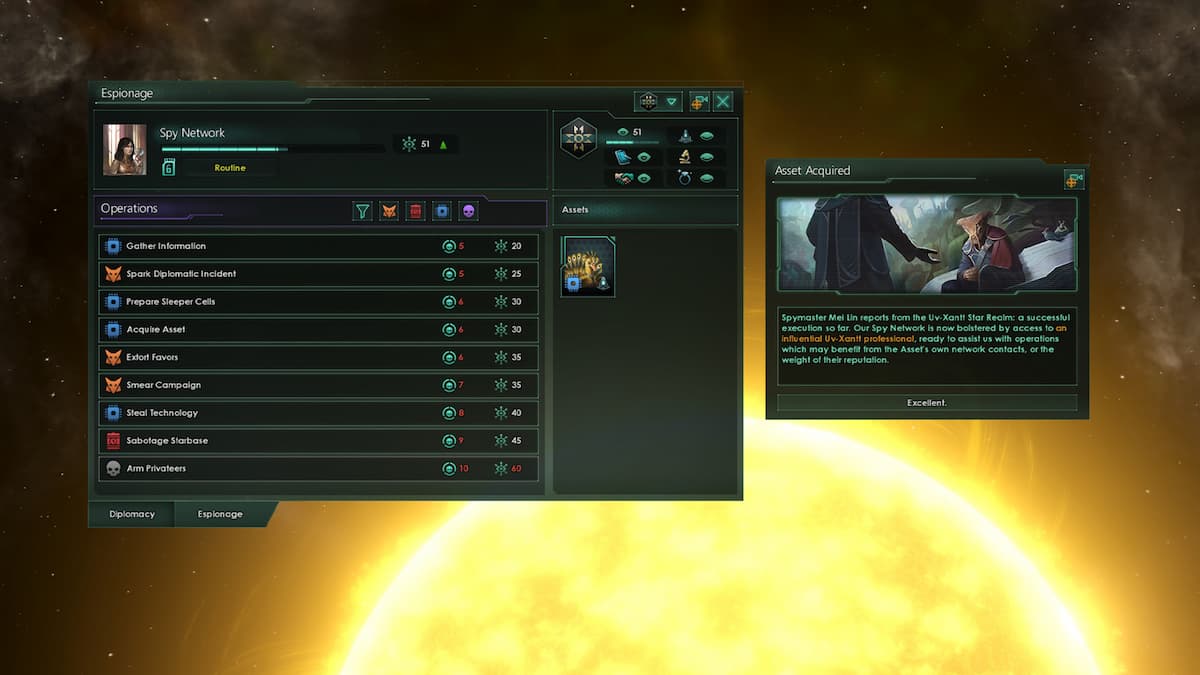 When you make first contact with an empire in Stellaris following patch 3.0, you’ll now have much more options available to you about how you do this. If you’re more aggressive when you initially meet a new civilization, chances are they’re going to be just as hostile back to you. It can make communication and diplomacy much more difficult in the future. When you want to be a bit more crafty about it, you can choose to be friendly upfront, and then send an envoy out to create a spy network against an empire, and they’ll be able to perform espionage missions for you.

How to create a spy network

Before you can make a spy network against an empire, you need to establish first contact with them. This can happen by discovering them one of their starships in the same sector was one of yours. You then receive a new task in the situation report where you can establish contact with an empire. Previously, this required society research points, but now, you have to use an envoy to make contact with them. There will be a series of events that happen that can dictate your empire’s diplomatic relations with other societies.

After you have established first contact with an empire, you’ll be able to communicate with them in the contacts tab on the upper left tab of your screen. Click on the empire from that list, and on the left side you’ll be able to see how they view you, their stance on diplomacy, and how their empire compares to yours. Beneath that you will have a diplomacy and espionage tab. On the espionage tab, you can choose to send one of your envoys over to that empire and create a spy network.

A spy network will be not be setup overnight. Your envoy needs quite a bit of time to build up that network. On the espionage page, you’ll be able to see your envoy’s infiltration level. As their infiltration level increases as they remain in that spy network, they gain access to additional espionage operations that they can perform in that empire. These operations are extremely difficult, and discovery can cause trouble for your envoy, and decrease your empire’s relations with the one you’re spying on.

Here are all of the espionage operations your envoy can choose to pick once they have a high enough infiltration level.

As your spymaster gains more intel about an empire’s assets, you’ll be able to learn more about them.