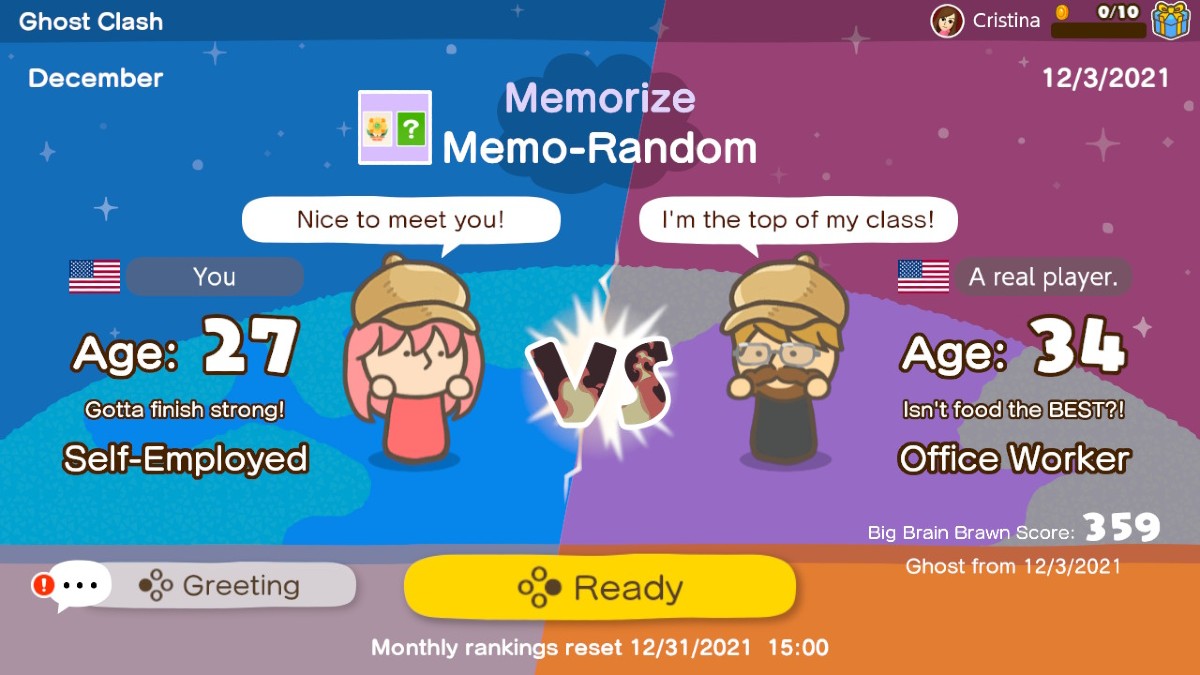 In Big Brain Academy: Brain vs. Brain, you’re preparing yourself to compete in a multiplayer Brain Bowl with your nearby friends and family, or with other players around the world in five categories: Identify, Memorize, Analyze, Compute, and Visualize. That Brain Bowl is called the Ghost Clash.

Ghost Clash is the main reason why Nintendo brought Dr. Lobe out of retirement after 14 years. In this mode, you’re competing against another player’s ghost data. If you’ve ever played the time attack or trial mode in Mario Kart, ghost data represents the fastest time based on the player’s previously recorded playtime. It serves only for that player to improve their timing, not to interact dynamically with live players. In this game, though, the ghost data is not your own, but rather your friend’s, family member’s, or another player within your home country or abroad.

In World Ghosts, you’re competing against random players’ ghost data online in activities randomly selected from all five categories. For example, say you select Identify. The opponent whose ghost data you’re playing against is revealed to be a 35-year-old office worker from Japan. You’re playing Fast Focus against each other. Each round gives you 20 seconds to guess the animal coming into focus before the player’s ghost data does. During the first two rounds of World Ghosts, your opponent won’t be as fast as you unless your fingers are slippery. If you go for Round 3 on the same day, you’ll be competing against the brawniest opponents, which might make beating their ghost data very difficult.

The mechanics are the same if you play your friends’ ghosts, your family’s ghosts, or search for an opponent by their Ghost ID. However, for Friends’ Ghosts and Family’s Ghosts mode, you need to have played with them nearby before you play against their ghost data to improve yourself. Since playing against people’s ghost data requires online connectivity most of the time, you need to have a Nintendo Switch Online membership in order to play Ghost Clash.