The Anno 1800 beta has just begun! If like me, you would love to spend your weekend being a captain of industry on an island in the middle of a rather lovely sea, then this is good news for you.

The beta runs from today until April 14, giving you enough time to experience the game’s major systems and decide if you want to buy it. Sure, that is not really what betas are for, but Ubisoft have advised that this is very close to the finished product, so we can judge this particular book by its cover.

It is also an open beta, so anybody can download and play.

Now, you cannot access the beta via Steam, sadly, but you can access it via Uplay, or the Epic Store. Just pop on over to either launcher, download the beta, and you are good to go. It has prominent placement on both storefronts, so you will have no problem finding it.

You will need a constant internet connection to play the beta, but this will not be needed for the full game. It just makes sense, the point of the beta is to gather data, and it is hard to do that if people are playing offline.

In the beta, you will have access to multiplayer, and the first act of the campaign, but citizen progression will be capped at tier 3 instead of tier 5. Finally, those saves will not carry over to the full game.

If you do play the beta, and end up buying the full game, you will also get a reward in the form of an exclusive Chess Table decoration for your public spaces that can be claimed from the Ubisoft Club after the game launches. 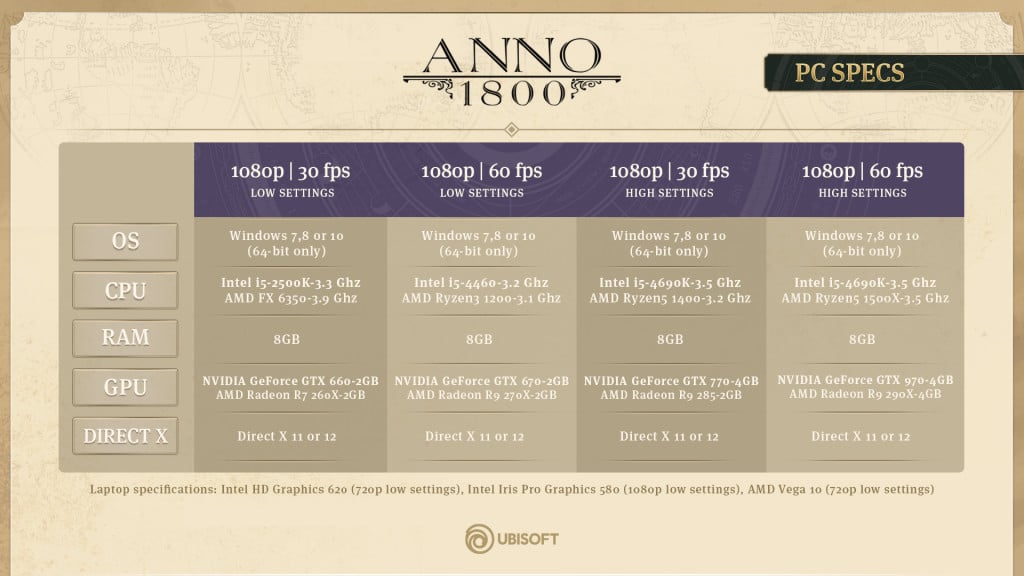 Finally, you can check the image above for the minimum and recommend specs if you plan on playing.

I have to say; the game has been running very smoothly for me. Now, that should be everything you need to know about the Anno 1800 beta, so have fun building your cities. I know I will!