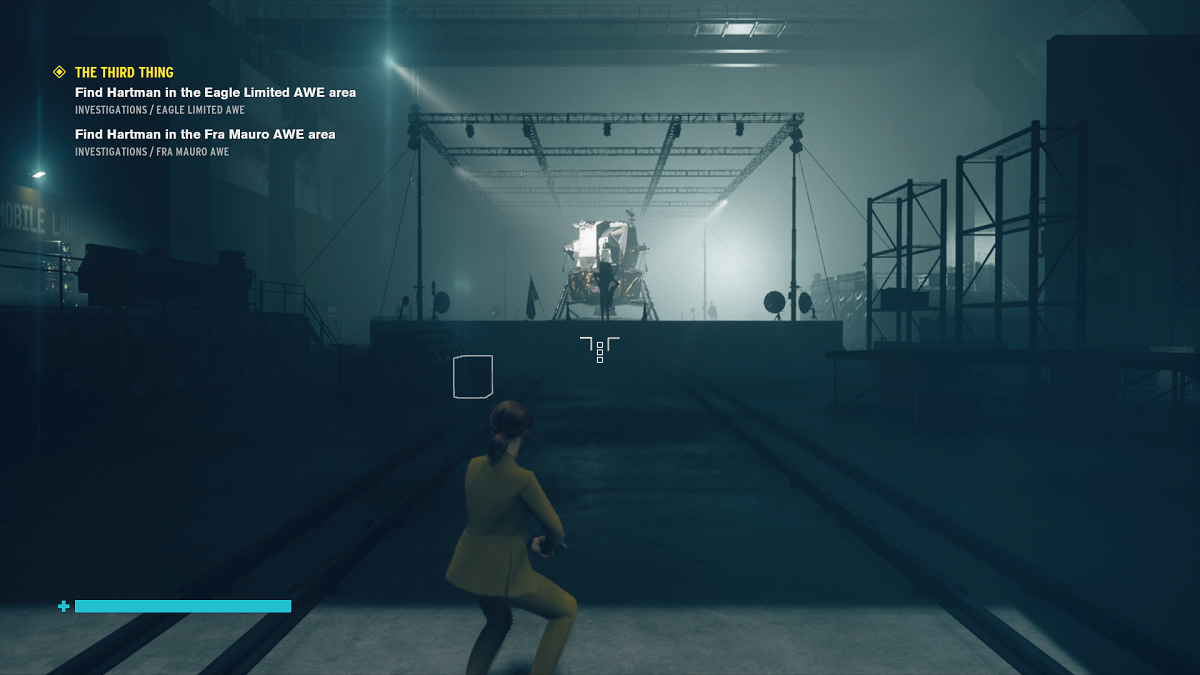 Hartman is the main villain in Control’s AWE expansion. The former psychiatrist, who Alan Wake fans will recognise from Remedy’s 2010 game, is a deformed beast thanks to his encounters with the Dark Place and the Hiss. Shaded Hartman is the reason why the Investigations Sector was closed off years ago, and it’s up to you as Jesse to kill him once and for all.

You will encounter Hartman six times, and the final encounter leads into a boss fight. Learning how to chase Hartman off, and then defeat him, may be tough if you’re unsure about what to do. Allow us to step in and give you pointers for each encounter.

Your first encounter comes after Hartman stops you leaving in an elevator. As he’s a product of the Dark Place, he hates the light. After he rips open the elevator door, dash out of his way and grab the nearby power core. Launch it into the power module to your right to activate the lights.

Look to your right if you’re facing the module. There are a stack of power cores that need to be launched into modules scattered across the room. These modules are situated in dark areas, and Hartman can hurt you if you stay in the dark too long. Your powers — apart form dash and levitate — don’t work here either.

Grab a core and use your abilities to fling it into another module up a walkway to your left. This lights up another area, and you need to repeat this process two more times. Take your time, use lit-up areas to protect yourself, and dash as much as you can to get in and out of dark areas. Once every module has a core, push the button nearby to bring the lights on and scare Hartman off.

There are two encounters in this region. The first is in an enclosed area, and some of the lights flicker off after a few seconds. Follow the lit path to avoid Hartman and, if a light does go out when you reach it, dash back to the previous one. Wait for it to come back on, and then dash through it to the next permanently lit area.

You’ll eventually reach an area with a breakable wall and a power core nearby. Use your Push ability to break the wall, and launch the core into the module. Push the nearby button to light the entire area and force Hartman to retreat.

For the second encounter, there are three platforms with control panels. You have to use each console to move a rail-bound light around the room, which acts as your cover as you grab power cores. There are obstacles in the way as you follow the light, so use dash and levitate to avoid them.

For this encounter, you need to move the Train Carriage Altered Item to turn the lights on. Dash to the lit area on the left and push the button to activate the carriage, which is hanging above you. Dart to your right to the console on a raised platform. Defeat the Hiss that spawn, and push the button to restart the train.

Dart left to the mobile lab, kill the Hiss, and push the button for the final time. Dash to the elevator at the end of the room, ride it to the office above, and push one last button to bring the lights on.

This is where things get tricky. There’s an office ahead of you with four power core modules in it. There are four towers dotted around the room, and you need to get their cores to slot into these modules.

Hartman spawns Hiss soldiers to combat you, as well as Hiss clusters to stop you getting access to them. Kill the Hiss and shoot the clusters that encase the tower. Grab the core and dash to the office. Launch it into a module. Repeat these steps three more times.

Be aware that removing a tower’s core turns their lights off. This increases the darkness in the room, which means Hartman can attack you over a greater distance with each core you grab. If he gets too close and lines one up, drop the core, and dash away. You can grab it again before he lines up another attack. Flip the switch once all four cores are in place to scare him off.

This is the final encounter before the boss battle. Before you drop down, call in Ranger reinforcements on the intercom in the room to your right. It will help for later on, trust us.

The entire room is dark apart from a platform on your left. There are three modules dotted around the room that need cores to power their lights. Dash and weave around Hartman to grab the cores and launch them into the modules. Once all three are in place, flip the switch on the main platform to activate the lights.

How to complete the Hartman boss battle

With your Ranger partner in tow, start launching objects and firing your Service Weapon at Hartman to damage him. Pierce and Charge are you best weapon choices as they do the most damage.

If you’re on foot, watch out for Hartman teleporting towards you. He will smash you with one of his arms, or grab you and drain your health. If his attack is the latter, use your controller’s thumbstick or mouse to wriggle free. If you’re levitating or far away, he’ll use projectiles to attack you. These can really hurt, so don’t forget to dash if you see him lining up a long-range attack.

Keep repeating these steps until he’s nearly dead. At the last minute, Hartman will pound the ground and knock the cores out of their slots and spawn some Hiss as backup. Retreat to a light source and attack the Hiss reinforcements. If you can, seize a couple as they will help take down Hartman.

Race around the room to install the cores. Your Ranger buddy and seized Hiss allies should keep Hartman occupied while you do. Once the lights are back on, tear into him again using the same method as before. You’ll eventually take down his second health bar and defeat him.