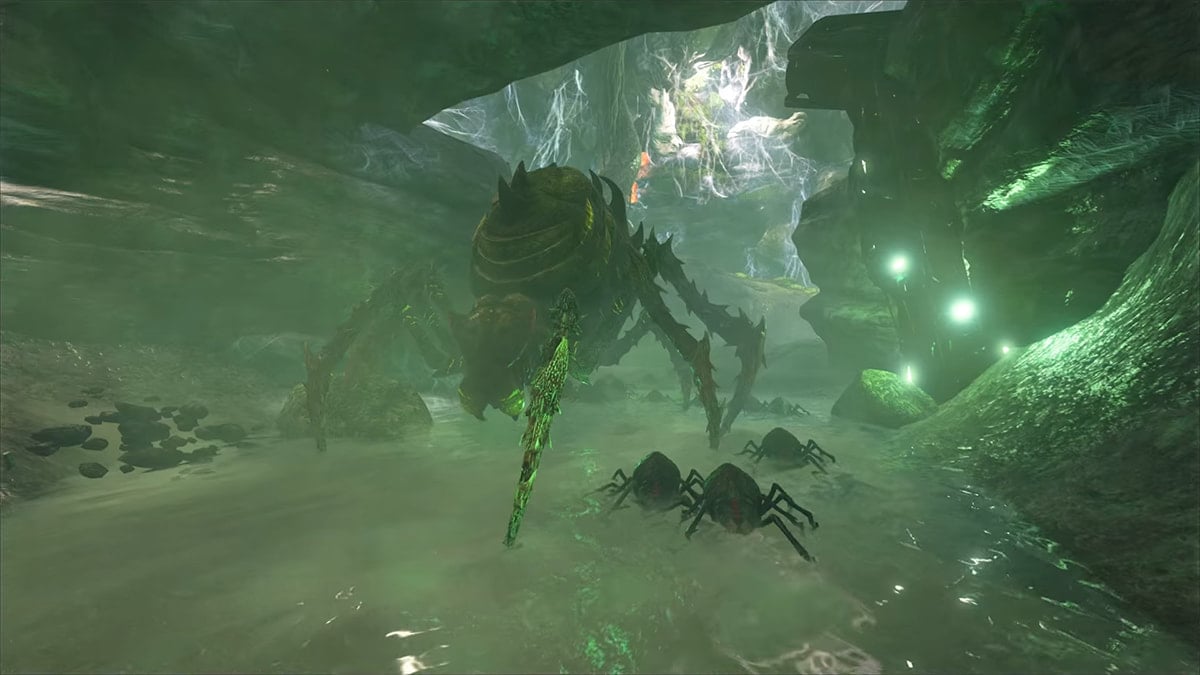 The Broodmother Lysrix is the first boss that players should look at summoning and defeating within The Island on their journey towards unraveling the mystery of their apparent prison. With simple dungeons to be cleared and a straightforward boss fight, Lysrix is a relatively easy means of introducing how boss progression works within ARK: Survival Evolved.

The process remains relatively unchanged for all bosses: clear specific dungeons to retrieve an artifact, which is then used to summon specific bosses. These bosses will then drop trophies, needed to unlock the final dungeon and boss of The Island.

Note that bosses can be summoned at a higher difficulty. This guide clears Broodmother Lysrix at the lowest level (Gamma) to introduce the progression to players. Higher difficulty levels will need the same artifacts, along with additional trophies that are listed at all obelisks.

Central Cave is a relatively straightforward dungeon, making it a prime first step for new survivors. Be wary of the Arthropluera’s ranged acid attack – it decimates the best armor in a few hits. Wearing hide allows players to pause for a moment and repair armor with the fiber. Bringing a tame can make short work of most mobs that tend to cluster chokepoints, but be cautious of falling off ledges into piranha-filled bodies of water.

Lower South Cave is a very easy dungeon if done correctly, with only a slight chill that shouldn’t affect survivors too much. Your primary enemy in this cave will be torpidity: if players get knocked out, you’re as good as dead. Keep the stimulants on your hot-bar, and watch the ceilings as many of the creatures will drop onto your head. Use ranged weaponry to force insects to drop early, and use the insect repellant if you need to dodge enemy aggression.

The Lava Cave tends to claim at least one victim per run: it’s extremely hot, there are multiple jumps that must be performed, and all the while, things are trying to kill you. If you’re unsure about a jump, use a grappling hook to guarantee safety. Use the rifle consistently to examine the next platform for creatures that will rush you once you land.

Only 20 dinos can be brought to any boss fight – any more and they’ll be left on the platform.

Ensure the Megatheriums are bred with a 100% imprint, and stagger the leveling between melee damage (every one point acts in this fight as roughly 4) and health. Don’t get too comfortable, either; Lysrix and her minions may opt to target players if the sloth-pack is beginning to run thin. Once she’s down, grab her banner to proudly display at your base as a warning to other creepy-crawlies.