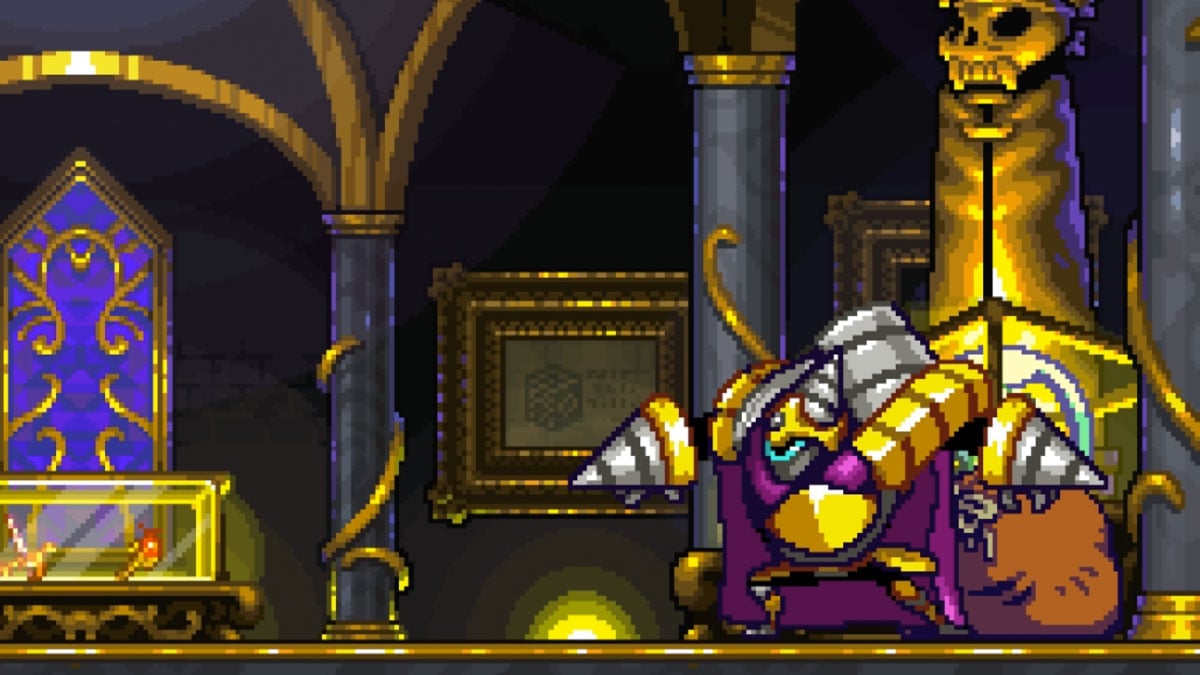 Shovel Knight Dig begins with Drill Knight stealing your bag of gems, and it ends with you confronting the head of the Hexcavators inside his treasure room. It’s the only battle arena with a permanent layout, but that doesn’t really mean much — it’s still the challenging fight in the game. You’ve come this far, so make sure you’re prepared for the final confrontation.

Related: How to beat Hive Knight in Shovel Knight Dig

Unlike other bosses with assorted attacks, Drill Knight uses a repeating combo in this first phase. First, he’ll charge forward, leaving himself fully open to attack. Don’t jump onto his head though — he’s about to leap into the air in drill form before burrowing into the ground. When he emerges, he’ll pop up and slam down into the ground. Don’t rush in for an attack immediately, as sparks will fly out from the impact. Once they’re clear, you can get in a few blows. This is followed by a big punch, which you need to jump over. That’s because it’ll send Drill Knight charging forward, getting his drill hand stuck in the side of the arena. Take the opportunity to hit him a bunch, but don’t get too greedy: he’ll throw another quick punch at you once his hand is free.

This pattern repeats for the entire first half of the fight, but fortunately, there are plenty of opportunities to deal damage of your own. Once you have the rhythm down, you can coast through this first part.

Drill Knight has the most HP of any boss, but he still changes things up when he reaches half health — this is where things get chaotic. First, the entire room will fill with dirt, meaning you need to be constantly digging throughout this entire phase. Don’t let the dirt drag you to the far wall since that will crush you and deal damage. Also, beware of the occasional spikes that come through the dirt. Lastly, be on the lookout for some of the previous phase’s attacks and a bunch of new ones.

First, Drill Knight will do the same leaping drill jump from before, but thankfully it will actually clear any dirt in its path. After a few dives, he’ll do the same slamming attack, so dodge the sparks as before, then get in a few hits. As for new attacks, he may speed up the dirt movement and start laughing. This is a chance to get in some hits, but take care not to be dragged into him, or you’ll take damage yourself. Drill Knight can also send his drill-fist flying through the dirt in a roundabout pattern, so don’t let it catch you as you’re digging your own path. Lastly, he can transform into a spinning, bladed top that bobs and weaves through the dirt — keep your distance until he calms down.

As his health starts to bottom out, Drill Knight will activate his final attack. The buzzsaw from the regular levels will show up, and the dirt will reverse direction with increased speed. At this point, you need to hammer on that dig button to reach Drill Knight and finish him off before the saw catches you.

Drill Knight’s boss battle is intense, which is exactly what you’d expect from the final fight in the game. You can get through the first phase with memorization and rhythm, and you can get through the second phase with careful timing, making sure to speed up and slow down as needed. With enough effort, you’ll bury the game’s final boss and finish off Shovel Knight Dig.