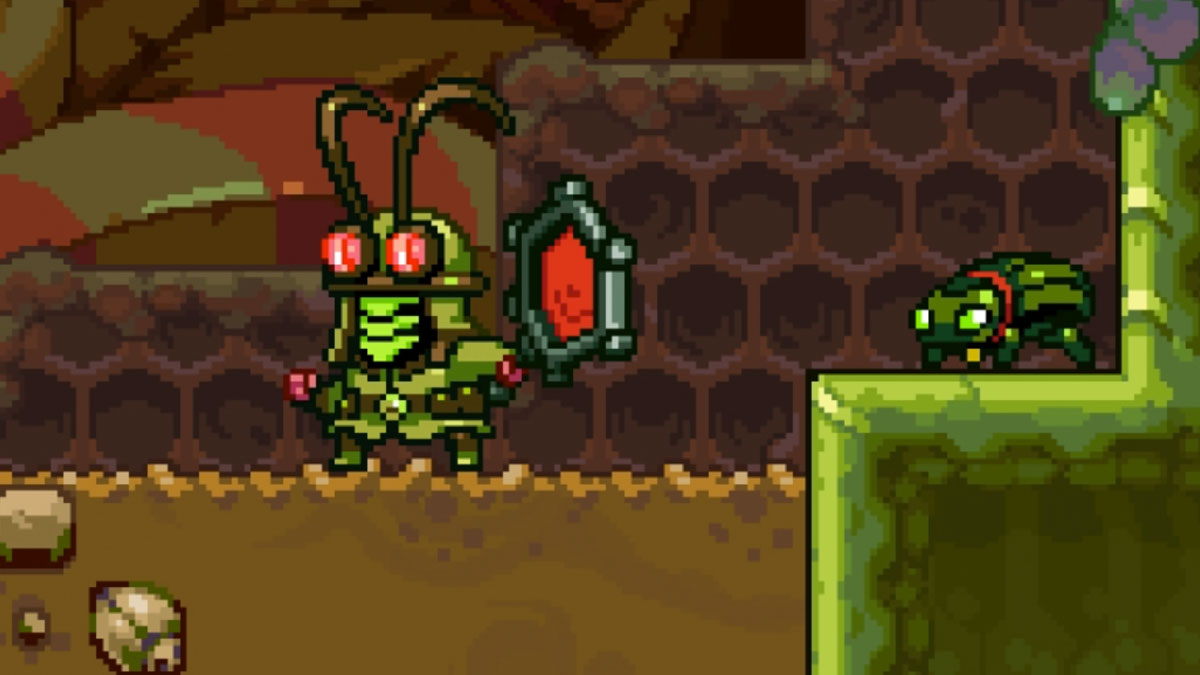 When you reach the bottom of The Grub Pit in Shovel Knight Dig, you’re in for a two-on-one battle against Hive Knight and his bug buddy Fleck. Hive Knight is a new addition to the Shovel Knight universe, and he’s one of the trickier Hexcavators to take out. Here’s the strategy.

Related: How to beat Scrap Knight in Shovel Knight Dig

How to defeat Hive Knight – Phase 1

Hive Knight has a variety of attacks at his disposal, most of which involve teaming up with Fleck. As usual, the battlefield can spawn in a few different patterns, but if you get one with dirt pits like the screenshot above, try to avoid digging down if you can — this can pretty easily corner you.

In the first phase, Hive Knight uses his net like a tennis racket. He can send Fleck careening around the screen with a serve, so be ready to back off or jump over the insect if that happens. Fleck can also dig into the ground and hoist up a massive spike ball. It’s easy enough to dodge the first time (keep your distance when the bug starts digging), but you also need to watch out for the return — Hive Knight slaps the spike right back at you like a terrifying tennis ball. Finally, Hive Knight might hover on one side of the arena then divebomb across the screen. This is a good chance to bop him with a shovel drop if you can time it right.

There’s one more thing to be aware of in this phase (and for the rest of the battle): don’t attack Fleck directly. You’ll stun the bug, but you won’t do any damage to Hive Knight’s health bar. He’ll then fly into a rage and start attacking at a much faster rate.

How to defeat Hive Knight – Phase 2

Phase two is where things get even trickier. Hive Knight will periodically drop lanterns that hit the ground and leave behind green balls of fire — avoid touching them until they fade out. Additionally, Hive Knight starts using his net like an actual net, and it’s possibly the nastiest attack in the whole game. If you get caught, your health will start draining, so rapidly attack to break free. You’re in the danger zone if you attack Hive Knight head on, so stick to shovel drops onto his head for this second phase as much as possible.

Hive Knight is one of the tougher bosses in Shovel Knight Dig, but he is definitely beatable. Leave Fleck alone, be extra careful of the net, and you’ll squash this boss soon enough.