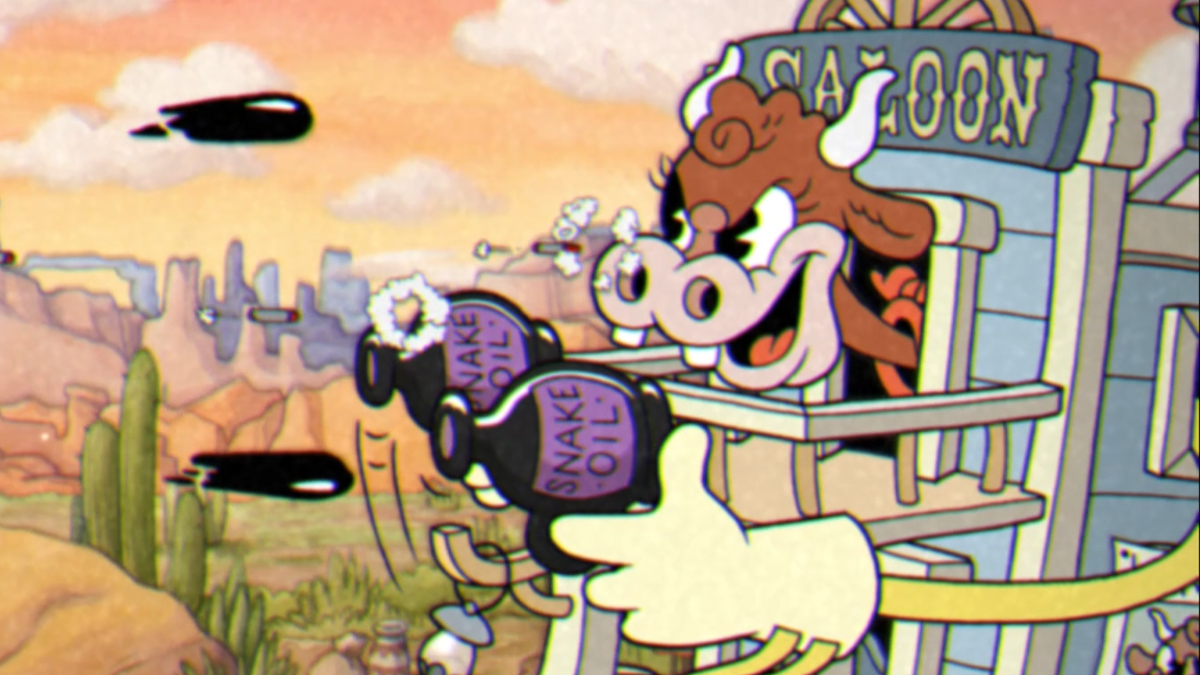 Cuphead’s The Delicious Last Course DLC had to have at least one shoot ’em up boss, and it’s the wild west rebel, Esther Winchester. This steer is mighty tough, and her fight has four phases to get through if you want to get her wrangled. Here are tips and strategies on how to beat Esther Winchester in Cuphead.

Related: How to beat Mortimer Freeze in Cuphead: The Delicious Last Course DLC

Esther’s first phase has the most going on — be sure to keep firing on her throughout the battle. Primarily, she’ll sling two bottles of snake oil your way. These will swirl in the air before crossing the screen, so you might need to dodge more than once. If Esther starts winding up her lasso, move to the top or bottom of the screen away from her. She’ll pull a cactus across the screen, blocking out part of the battlefield, as you see above. If she’s lower than you, you can still fire the plane’s bombs until she releases the cactus.

Two other animals will cause trouble during this phase. First, a vulture will occasionally drop a bundle of dynamite. This will send out two waves of explosives when it hits the ground: a trio and a pair. Be ready to bob and weave until the whole bundle is done. Lastly, a flying horse may cross the screen. This can be shot down, but if you’re not fast enough, it’ll spit a spiked ball in your direction. Sometimes this can be parried, as it’ll come out pink.

Esther pulls out a vacuum for her second phase, which repeats the same two steps the whole time. First, she’ll suck in money bags, gold bars, and loose coins. There’s a lot on the screen to avoid here, so you might need to hit the plane’s shrink button to avoid it all. After vacuuming, she’ll drop a series of safes to the ground. These will then shoot out the same loot she just gathered — and sometimes, a piece or two can be parried. She’ll then activate the vacuum again, repeating the pattern.

Esther actually gets sucked up into the vacuum and turned into sausage for phase three. She only has one attack during this time: she’ll spit out a steak that makes its way across the screen in a looping pattern. Sometimes this can be parried, but most of the time, you’ll want to zip ahead of it to continue firing at the boss. While this is happening, cans of beans will also fly across the screen. If you fly by the open side, be sure to give a wider berth because the beans will actually lash out at you.

Finally, you’ll have to face a can of sausages in phase four. The two strings never stop firing during this phase, so you’ll need to move both up and down and back and forth to dodge between the open spots in the sausage link. The can will also spit out a wave of peppers. Parry the pink one if you can, but be sure to fly between them as they fan out.