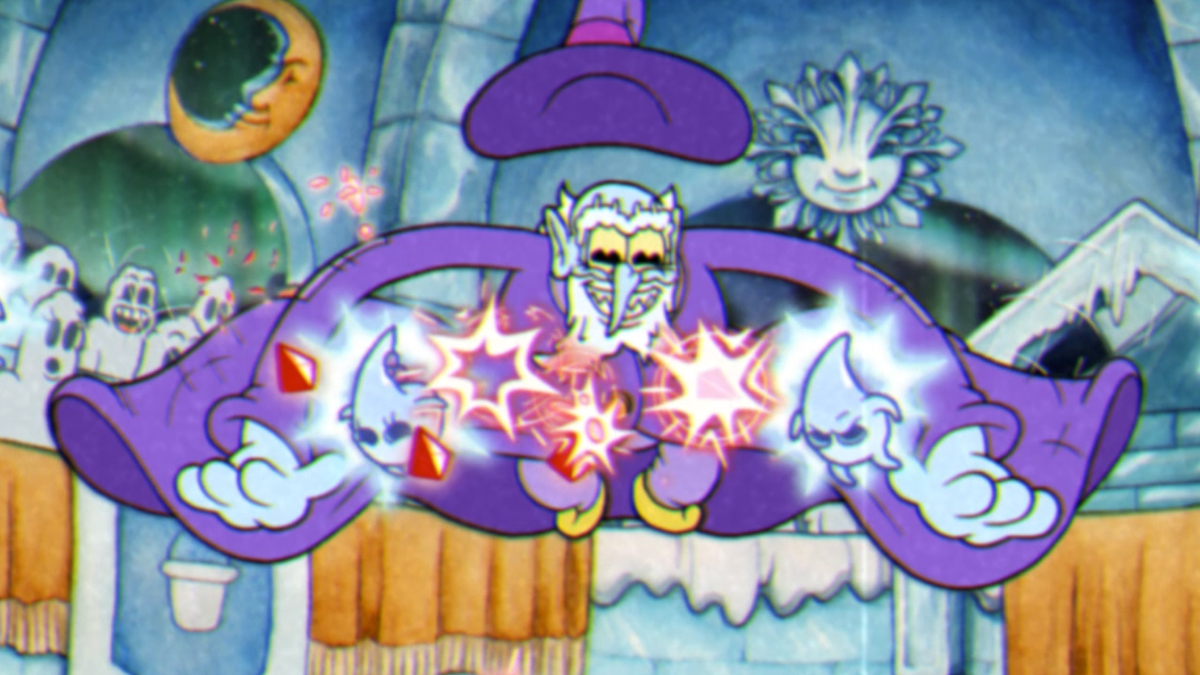 Every boss in Cuphead: The Delicious Last Course DLC has tricks up its sleeve, but Mortimer Freeze literally uses magic. Be ready for a whole bunch of ice-cold attacks. If you’re nimble and focused, you’ll be able to defrost this particularly nasty boss. Here are tips and tricks on how to beat Mortimer Freeze in

Related: How to beat The Howling Aces in Cuphead: The Delicious Last Course DLC

Mortimer, the magician, has quite a few attacks in the first phase. Primarily, he’ll spawn a group of four little ice creatures from his cape. These fall to the ground in a diagonal path, so be sure to sidestep them. After a moment, they’ll pop out of the snow and walk across the screen, but you can shoot them first if you’re quick. Second, Mortimer can slam an entire whale down directly in front of him — dash away when he rears back because this melee attack has a wide spread. It will also clear out any of the little ice people it hits. Lastly, he can send some slow-moving playing cards your way. These take up a decent amount of space on the screen, but often one of them spawns in a pink color, letting you parry it.

Mortimer will transform into a snowman for the second phase and has more moves at that point. First, he can roll directly across the screen, so be sure to make a big jump over his snowball body. You’ll know it’s coming when Mortimer leans back. If you hear a spring sound, then he’ll do the same move, but in an arc above you. Stay grounded to avoid getting smacked. Lastly, he may slam down his first and send out a wave of snow. This actually does no damage — it’s the follow-up you need to look out for. Three swords will poke up out of the snow after the slam. These always appear at the same distance apart and at the same interval, so be sure to step aside when you see them emerging.

This snowman can also transform into a refrigerator with its own set of attacks. First, it can open its doors and spit out ice cubes, which shatter into smaller cubes before melting away. Be sure to keep dodging until they’re totally gone. It can also spawn flying popsicles. These can be shot out of the air, but look for the occasional pink one (it must be strawberry-flavored) that you can parry.

The final phase is in the air, so leap up the floating platforms to get started. Be careful not to fall off during the home stretch. Mortimer only has three attacks in his snowflake form, but they’re all tricky. For the first, he’ll pop out an eyeball that circles around the screen. It’ll send out energy beams at a regular pulse, so you’ll need to learn the rhythm and jump over it when the beams are down. Second, Mortimer can spit out a series of buckets, one of which is usually pink. Dodge these, then be ready to dodge again because they explode in a group of little moons upon hitting the edge of the screen. Finally, Mortimer’s spirit may circle around the screen for a moment before summoning a barrage of ice cream cones. Be ready to jump to a safe space as they move across the screen.