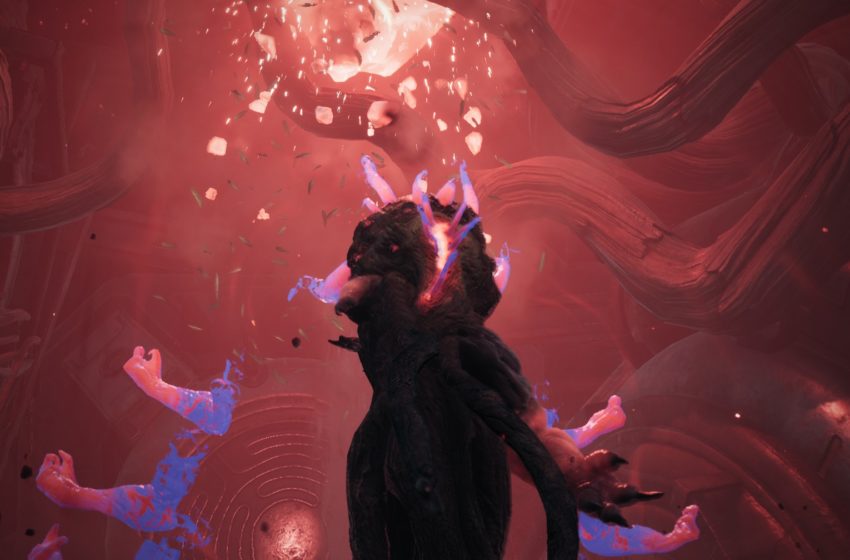 The final battle in the DLC Subject 2923 in Remnant: From the Ashes pits you against Harsgaard. This fearsome root monstrosity had likely been a man before it joined the root. It’s the last fight you have before potentially putting the root down for good, and it’s a two-part battle that gives you a new primary weapon in the final phase.

The weak spot for Harsgaard remains the same during each encounter: aim for the split in the middle of its head to do the most damage. We also found using weapons with a faster rate of fire and had the Fire Mod attached to them were the best to use in this fight. The second phase of the battle forces you to use a required weapon, though, every time.

The first fight against Harsgaard is pretty straightforward. The creature fires out these small orbs onto the ground and sends them out from its starting position. These orbs damage you if you touch them, but there are small cracks in their formation that you can idly move through while shooting at the creature. You can casually avoid these by shifting to the left and the right while firing at the boss.

After you damage Harsgaard enough, a small ring forms around it. The ring starts small but then expands outward, damaging you if you touch a small portion. When you see it rise into the air during its first change, charge forward and roll underneath it as it expands out. You should have enough time to move before it lands behind you. If you’re far enough away from Harsgaard, you won’t have to run until the second ring moves forward.

When you lower Harsgaard to half its health, it goes down on all fours and attempts to rush at you, swiping with its arms against you. You want to keep your distance from the creature, but its exceptionally good at closing the gaps. Wait for it to get close, prepare to strike, and then dodge to the left or the right. You should be able to anticipate when it’s about to hit you and from what direction depending on its arm movement. Other attacks in this form include the crystals going out against you, the spectral arms slamming down on the ground at you, and Harsgaard dashing, attempting to grab you.

The spectral arms on the back of Harsgaard may point upwards to fire a barrage of missiles at you. All you have to do is dodge them shortly after you see the attack coming. You should be able to avoid them, but it can be annoying, depending on what is happening amid the fight.

After you defeat Harsgaard, the next phase of the fight features a much larger version of it on the other side of the room. Now, the crystals are in front of Harsgaard, and its arms are on either side of it. The arms can fire out disruptive blasts against you, and the crystals, when powered up, can fire out large rays of fire at you. When you see the crystals charging up, dodge them, and stand in front of the one not charging up to shoot. If they’re all charging, dodging each time they fire prevents you from taking damage.

When the spectral arms fire a wave-like blast on the ground, rush to the other side of the room. These attacks steadily degrade your health over time, and you should keep away from them as much as possible. The wave-like blasts can happen on the right or left side of the room. Sometimes, these attacks can occur when the crystals release several of the destructive energy balls that appeared at the start of the first fight, so you have the dodge both of these attacks.

The main thing about both fights against Harsgaard is your dodge. If you dodge too soon, the higher likelihood there is that you’ll be taking a hit from the attack. You need to patiently wait for the attack to almost reach you to avoid the most damage.

When you beat the fight, you receive the weapon you received in the middle of the battle and a good chunk of scrap for your trouble.