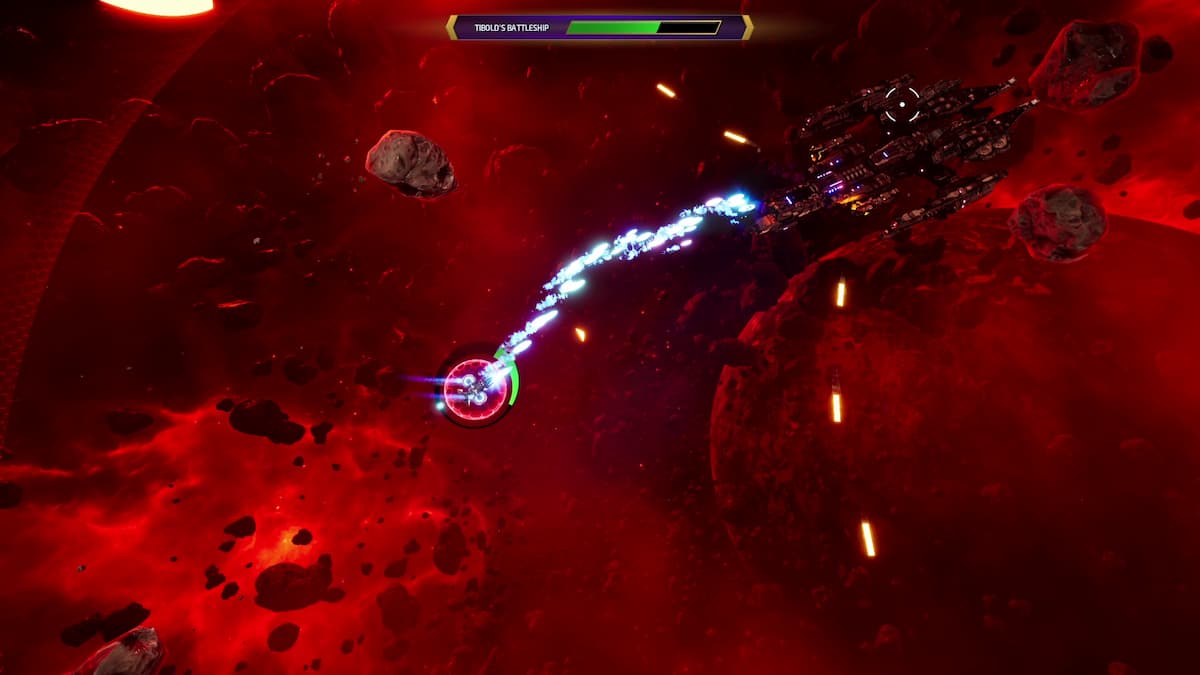 While Subverse makes it clear that it is a game designed for adults, it also makes a point of proving that it’s more than just a lewd adventure by providing some perfectly competent gameplay sections. One part of the title’s main gameplay sections is a shoot ’em up, where you take control of the Captain in his F3N1X fighter ship, and it doesn’t take the game long to throw you in at the deep end.

After a tutorial level with some basic enemies, and then in a story section, you will encounter a gunship lead by Tibold, a pirate king looking to recover some of his property that you stole. After this, is a boss battle with Tibold’s gunship.

For those who have experience with shoot ‘em up games, Tibold’s fight will offer a mild challenge but ultimately shouldn’t be a huge threat. However, for everyone else, Tibold’s battleship can pose a serious challenge.

It’s a fight that contains three stages, each where Tibold’s cruiser will attack with different patterns and ferocity.

In the first stage, there are three attack patterns to be wary of. The main one will be a three-shot scatter that fires towards you, supported by rotating twin cannons and double homing missiles. You can dodge the scatter shots with careful flying. While the twin cannons rotate to your position, they don’t hit too hard. If you’re low on health, get a rock between you and the ship to avoid them.

The double homing missiles will need to be shot at to avoid impact. As you do this, fire straight at the ship with your main weapon, firing off your missile with the right mouse button when available.

When it hits about 66% of its health left, the battleship will retreat, and you will need to defeat a wave of smaller enemies.

Once the wave is clear, you will reach the second stage, arguably the most difficult of this encounter. While it will use the rotating cannons similar to the first stage, its main attack will be firing three straight lasers out from the ship. These beams hurt immensely, and the ship will move and rotate to catch you.

Your best approach is to use Space to boost to put a rock between the ship and you. It will continue to rotate to find you, so stay as close to the rock as you can and rotate with the beam. When it stops, emerge and fire everything available to you at the battleship before retreating again when the main attack starts. With enough damage, to about 33% health left, you’ll trigger stage three and a new wave of fresh enemies to beat.

The battleship will revert to two main attacks. The first will be a huge mortar strike attack, with lots of explosive areas. This should be reasonably easy to avoid while continuing to attack the ship. The second is another three-beam attack, but the two side lasers will arch outward, and the ship will rotate with you.

There are no rocks to save you this time, so you will need to rotate around the ship, keeping as close as you can to stay ahead of it. The boost button can help if you’re struggling to keep up with it.

Continue hammering the ship, and eventually, you will bring it down and trigger the next section of the game’s story.