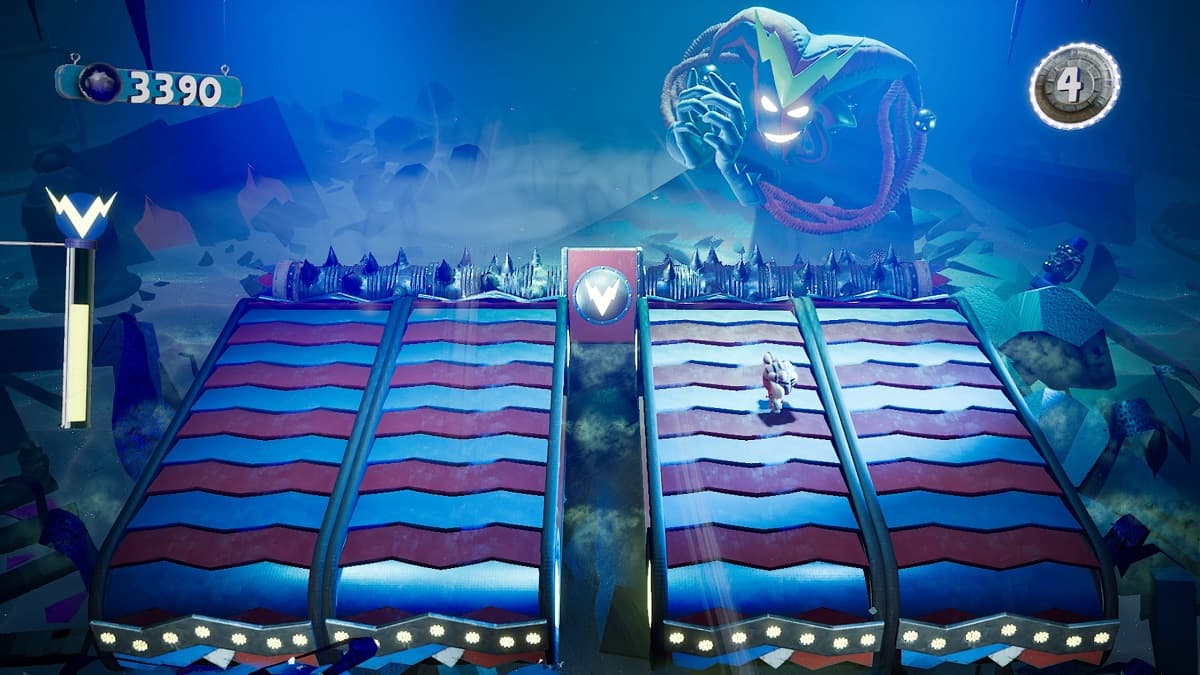 Much like the classic adventure games of old, Sackboy: A Big Adventure introduces boss levels to you for each of the overworlds within the game. The first one that you’re going to encounter is a fight with Vex, the game’s main villain, as he tries to gather enough resources to cause Uproar, the energy that will wipe out Craftworld.

Before reaching the actual boss fight, you will need to make your way through the standard level called Having a Blast. This will mostly consist of explosive bees chasing you down that can be used to destroy big crates. You will need to coax them into destroying almost all the crates in the early section of the level to ensure that the Dream Orbs can reveal themselves.

The first orb is in the first large box that you encounter, the second orb is through the roll gap just past the first one on a high ledge, and the final orb in one of the middleboxes on the platform where you fight the red spinning devil, where you will need the bees to destroy all the boxes underneath you to get to. You should then reach the boss room.

Even early on in the game, losing focus during this boss fight can cause you to die, so this can pose a good challenge.

You will be thrown onto a pair of conveyor belts that slowly drag you into whirling blades. Make sure you’re always running away from them. Vex will throw bombs at you that will explode if they hit you on impact, but simply sit there if you can avoid them. Pick these up after landing and throw them at him.

After taking a few bombs, Vex will reverse the belts’ direction, so you will need to run towards him instead. Spikes and traps will also appear on sections of the belts during this phase that you need to dodge. If you need to, jump across to the other belt but be careful when jumping to avoid falling down the gap between them as doing so will mean losing a life. He will eventually switch the belt direction back to running forward.

Vex will, at times, throw a bomb on every belt running, so dodge where necessary and grab as many of the dormant ones as you can and throw them at him before they hit the whirling blades. You will also have a floating fist the slams the belt regularly, so make sure you are ready to dodge it.

Vex will reverse the belt direct again at about 30% health and speed them up, but the strategy should be the same.

Keep moving and throwing bombs where you can until he takes the last one, which will trigger a cutscene and the end of the level.