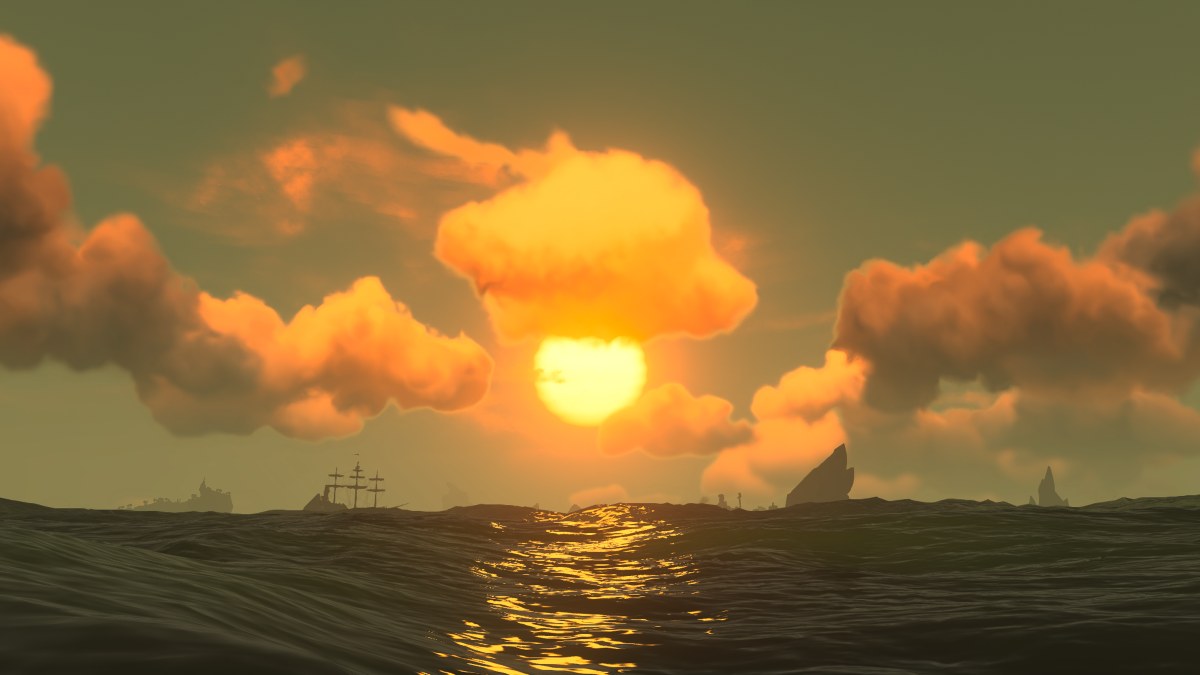 As one of four Regional fish species in Sea of Thieves, Wildsplashes can only be caught in The Wilds, which makes up the northeast Region of the map. Unlike fishing in the clear, sunny Regions of The Shores of Plenty and The Ancient Isles, you’ll find fishing in the dark and muggy Wilds to be a real challenge. You’ll need Earthworms to catch Wildsplashes, which you can dig out of grassy areas in more hospitable Regions. That, or you can find them randomly in Barrels.

To immediately sell the fish you catch to The Hunter’s Call, we recommended casting out at one of two Seaposts in The Wilds. These include The Wild Treasures Store, located at coordinates O-4, and Three Paces East Seapost, located at coordinates S-10. Wildsplashes sell for more than Splashtails, Pondies, and Islehoppers, but less than Wreckers, Battlegills, and Stormfish.

You can limit the pool of fish you can catch to just Wildsplashes and Splashtails by making sure not to fish within the title cards of Large Islands. This removes potential Islehoppers. Also, fish with a larger crew to catch more fish and maximize your odds of catching rarer variants.

Related: How to catch all Plentifins in Sea of Thieves

Russet Wildsplashes are the Base variant of Wildsplashes. An important note to begin: the dark-green, blackish waters of The Wilds make identifying fish here difficult, to say the least. Adjusting your in-game brightness and display settings could help, but this is not guaranteed, especially at night. That said, the Russet can be identified by its green and brown body that makes it blend in with the water more than some vibrant fish. You shouldn’t have any trouble finding one quickly, as it’s very common. One regular raw Russet Wildsplash sells for 225 Gold at Seaposts.

The Sandy Wildsplash is the Common variant of Wildsplash. While most species in Sea of Thieves reserve the albino color palette for the Rare variant, this is not the case with Wildsplashes, so look out for the Sandy’s noticeable white body and pink fins/eyes. The Sandy is still relatively common, so it’d be unlikely not to see one within 20 minutes of fishing with one or two people. This assumes you’re not incredibly unlucky, which can happen. One regular raw Sandy Wildsplash sells for 300 Gold at Seaposts.

The Ocean Wildsplash is the Uncommon variant of Wildsplash, meaning you shouldn’t see it too often, but it’s still around. Keep on casting if you don’t see one soon. With a crew of four, it’d be rare not to find it in 20 minutes or less, though. The Ocean is one of the more recognizable Wildsplashes with its vibrant-blue body and light-blue stripes, but anything can be confused with anything in The Wilds, really. One regular raw Ocean Wildsplash sells for 375 Gold at Seaposts.

Related: How to catch all Ancientscales in Sea of Thieves

The Muddy Wildsplash is the Rare variant of Wildsplash, and it’s a rare sight, indeed. Catching this fish could take you upwards of 100 Earthworms, or you could catch it on your first cast — it all depends on the RNG. What’s worse, it’s hard to recognize in the waters of The Wilds. Try to spot its brown and light-brown body, and do your best not to confuse it with a Sunny Splashtail, which has a different shape and yellower palette. Fish with a Galleon crew to maximize your odds of catching a Muddy. One regular raw Muddy Wildsplash sells for 3,000 Gold at Seaposts.

The Coral Wildsplashes are the Night variant of Wildsplashes, meaning they can only be caught at night. It’s harder to tell when night begins and ends in The Wilds, as it’s always dark and cloudy, but the change in brightness is still noticeable. You can also pay attention to the rising and setting of the sun and moon. The Coral is a bright, pinkish-red color, which makes it easiest to confuse with the dreaded Ruby Splashtail. However, the Coral glows in the water unlike the Ruby. The Coral should be fairly common at night, so you should see at least one during each night cycle. One regular raw Coral Wildsplash sells for 300 Gold at Seaposts.

While you’re on your fishing trip, always remember to check Shipwreck Barrels, Barrels of Plenty, Skeleton Ship Food Barrels, Rowboat Chests, and Storage Crates, as random fish can spawn in these.