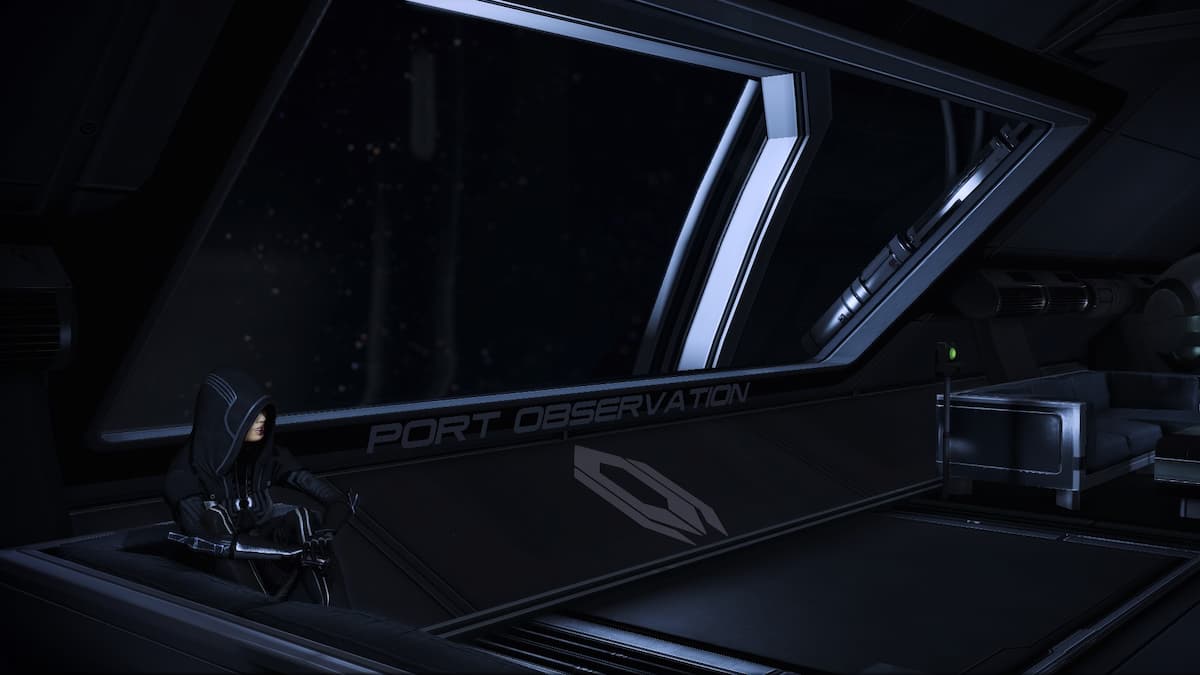 Each of your crew members in Mass Effect 2 Legendary Edition have a loyalty mission you need to complete to earn their trust. They need their entire focus on the Suicide Mission at the end of the game. By finishing these missions before the final battle, you’ll increase their chances of resolving any challenges they face, ensuring they’ll survive to make it to the other end. Kasumi, a crewmember you can acquire by visiting the Citadel, needs you help with a heist.

When the mission starts, you and Kasumi will be visiting a party where several rich and prosperous criminals are gathering at with the host of the event, Donovan Hock, being the prime target for Kasumi’s loyalty mission.

When you arrive to the party, Shepard will have an alias, and your primary goal will be to break into Hock’s vault to steal Okuda’s graybox, a device Kasumi has been hunting for after Hock killed her partner. Your first task will be to find the location of Hock’s vault, which will be next to his private quarters, next to a series of stairs. It’s underneath the center of the party, and you can reach it from the right or left side of the room.

When you reach the vault, Kasumi will uncloak and join you. She’ll explain the security of the vault will need to be broken before you can access the contents inside it. There are three security measures protecting it: a kinetic barrier, a voice lock, and a DNA scanner.

How to shut down the Kinetic Barrier

Immediately leaving the vault, look to the right of the entrance and there will be a power cable you can scan. By scanning it, Kasumi will sync your Omni-tool to it and you’ll be able to follow the cord to find the source.

You want to follow the cable out from under the center of the room, and go throughout the gallery. You’ll end up in a small alcove, and the source will be behind a hidden wall. By pulling on the statue nearby, Kasumi will reappear and she’ll have to disable the barrier.

The next step to break the security for the vault is to speak with Donovan Hock and gain a voice print. You can find him at the center of the party, next to the fountain. This part shouldn’t be too difficult. The best solution is to choose the Paragon or Renegade options when speaking with Hock, and he’ll go into a massive speech, without your involvement. Once he’s finished, Kasumi will have a large enough sample.

The next step is to learn the vault password for Kasumi to use for the voice print. You can do this by visiting the Security Room, which should be behind Donovan, next to some stairs. Kasumi will break the lock, and lead you through. You’ll have to manually bypass the next lock. A pair of guards will be protecting the area, which you can quickly eliminate. Once they’re gone, all you have to do is read the datapad on the security desk, and you’ll learn the password.

How to get the DNA samples

When you’re ready to go after the DNA samples, you can choose to convince the guard protecting Hock’s quarters or sneak in. If you want to convince the guard to let you through, make sure you’ve visited the Security Office in the previous step and learned the password to get through. If you haven’t, the guard will not let you through. Alternatively, you can sneak through by going through a side entrance, protected by several guards that you and Kasumi can take out.

When you enter Hock’s private quarters, you’ll need to find a DNA sample to get through the vault. There are multiple locations to search for DNA, but not all of the yield any. Here are the locations you need to be searching.

After scanning these three locations in Hock’s private quarters, you can leave with Kasumi and you should have enough for a DNA sample.

Now that you have all three, you’ll be able to retrieve your gear from the Saren statue you brought with you, and you can continue throughout the rest of the mission. The next step is to find the graybox inside Hock’s vault, which you can do by following the scanner’s proximity map. It should be next to the head of the Statue of Liberty. For the rest of it, it’ll primarily combat. Before you leave, next to the graybox, you can find the M-12b locust submachine.

You can follow the pathway and deal with the combative however you see fit. There will be several waves of enemies you need to battle to make your way to the landing pad. Be prepared to battle against Eclipse Troopers, Vanguages, Loki Mechs, and YMIR Mechs.

When you reach the exit of Hock’s warehouse, you’ll arrive at a landing pad, and the final adversary you have to fight against is Hock’s gunship, similar to the one you fight against when you’re attempting to recruit Garrus on Omega. Not only will you be fighting the gunship, but you also have to contend with several regular enemies as well. The regular enemies will be spawning on the left and right of the landing pad.

Your best bet is to take down the smaller enemies during the battle before dealing with the gunship. Your primary goal should be to lower the gunship’s shield as much as you can before it retreats to recover it and then deal with the small enemies that spawn.

After you’ve taken enough waves of guards, Kasumi will go through a cutscene where she disables the shields for the rest of the fight. Now, instead of worrying about the shields, you can focus on the gunship’s armor. The encounter remains the same, with enemies spawning onto the landing pad, and the gunship periodically leaving the area after you do enough damage to it.

Once the gunship is destroyed, you can take the shuttle that arrives back to the Normandy. Kasumi will have her graybox, and you’ll have gained her loyalty.