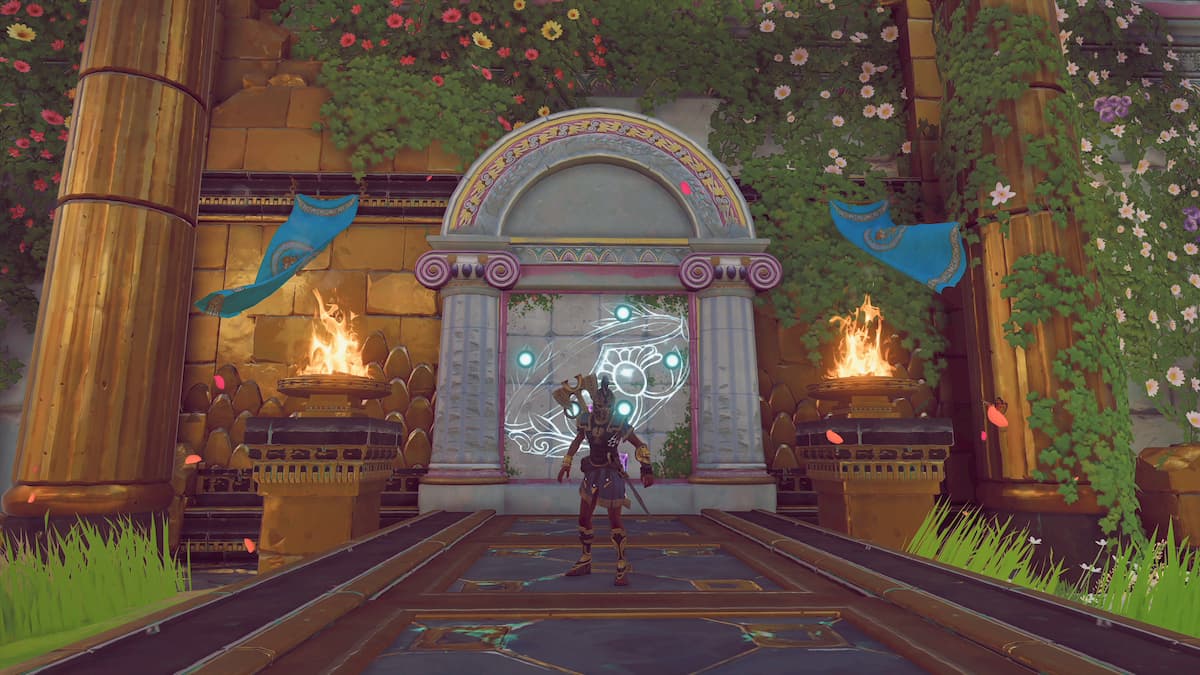 Completing the Constellation at the Palace of Aphrodite is fun because it sends you all over the palace. You will need to open lots of giant clams to get shiney blue pearls out of them, then bring them to the four by four grid and place them in the spots marked on the wall.

To find the first pearl, run up the ramp to the your left, all the way to the top. Here you will find a clam surrounded by jars. To open the clam, just smash them all with your sword. Grab the marble and carry it down to the constellation, and place it one of the holes that coincides with one of the marks on the wall.

Next, run to the right and you will see a small tunnel with some braziers in it. There might also be a Legendary animal around, if you haven’t fought him already. Thankfully, this renowned chicken is quite easy to deal with. On the way, you will see a clam with two braziers in front of it. Stand in the tunnel and fire guided arrows through the flame, then crash them into the top of the brazier to light them. When both of them are lit, the clam will open, givng you access to another pearl.

The third pearl can be found in a building directly across from the Constellation, surrounded by pillars. You will notice some stone plinths with cabbages on them, and will need to find a third cabbage to place on the empty plinth. Drop down at the back of the building and you will notice a golden cage. Smash in the weak wall and grab the cabbage, then bring it to the plinth to open the clam and get the pearl.

The fourth pearl can be found back where you found the first one. Go up the ramp to the first clam, then go to the right and ride the wind current up to the roof. Here you will find some ghostly targets and a switch. Pull the switch and the first target will become a physical item, allowing you to shoot it. When you do, another will spawn in, and you can continue down the line until you hit them all. When you are done, the clam will open. Be careful bring this one back, as you don’t want to drop it off a cliff.

The finall pearl can be found down some steps to the left of the Constellation. At first, this one is confusing, but behind the nearby vines on the wall you will find metal bars with a target behind them. Shoot the target to open the clam and grab the final pearl to finish the Constellation at the Palace of Aphrodite.