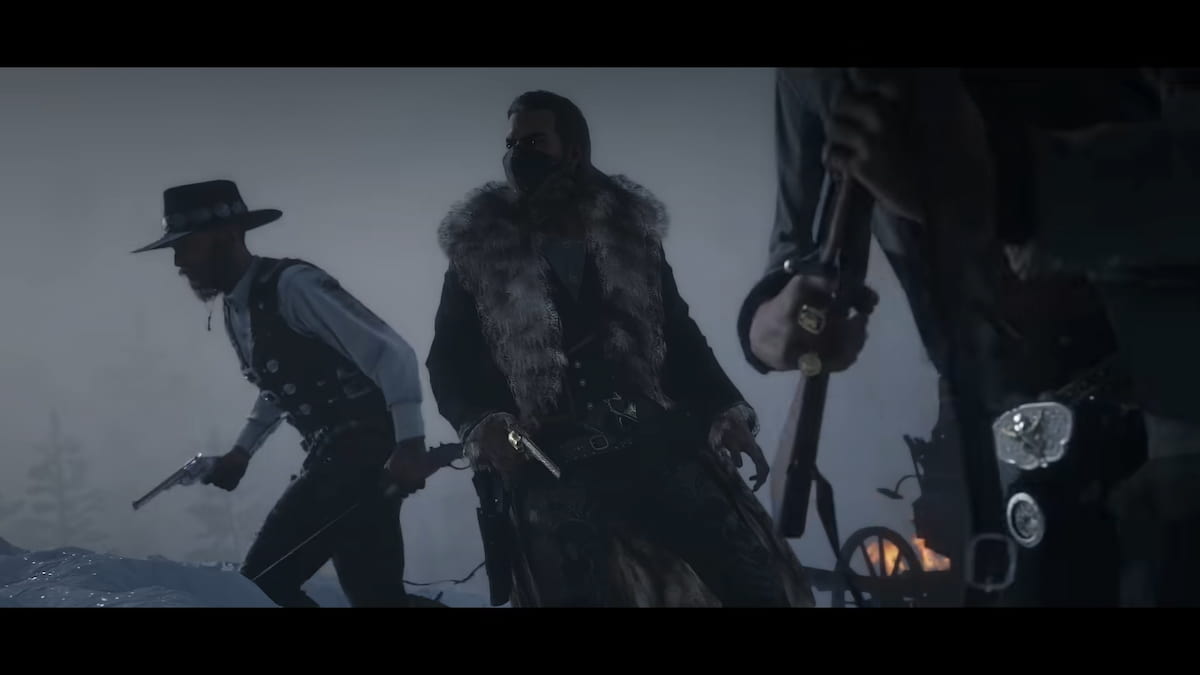 When you receive the Jeb Phelps Contract, the first part reacquires Jeb Phelps from the bounty hunters and rescues him. You will begin the contract near the stagecoach where he’s being held. Five bounty hunters are protecting him, three on horses and two on the cart. We recommend taking out the ones on the horses first and potentially stopping a little ways ahead of the stagecoach to ambush them while on their route.

Once you’ve cleared all of the bounty hunters, you can free Jeb from his prison. He’s going to want to make an example of the bounty hunters, so you want to jump on your horse, lasso any of the dead bodies you killed, and then drag them back to the town, Van Horn, where his old gang is located. They were the ones who turned him into the authorities for his bounty.

The final part of the mission is all about Jeb getting his revenge. When you arrive at Van Horn, several hostiles will be waiting for you that you need to take out. Shoot as many as you can, and kill every gang member you encounter. You also have the option of finding firebombs to toss onto buildings to destroy the city. Once you’ve cleared it all of the gang members, you can return Jeb to his safe house nearby. This will complete the quest, and then you can begin part two by speaking with another Blood Money contractor.

For the next step in the Jeb Phelps contract, you’re going to need to find one of Jeb’s old gang members. They supposedly know where the stash of Capitale that Jeb’s gang is hiding, but you need to bring him to Jeb alive. You can find the gang member at Butcher Creek.

When you arrive at Butcher Creek, there will be a house in the back that you need to find your way towards. You have to set it on fire when you reach it to bring the gang members out of hiding. After that, all you have to do is shoot any of the lamps outside of the cabin, and it should go up in flames. Wait for a little bit, and hostile gang members will arrive on horses to investigate.

Eventually, your target will arrive in the area. They will be different than the other characters because they will have a unique symbol on the mini-map. You want to make sure you hogtie this individual, and no harm comes to them. If they die, the mission is over, and you’ll have to start over. We recommend you take out a handful of the oncoming gang members, try to get your target closer to you, and then hogtie them when you’re able to grab them without too much gunfire coming your way. You also want to make sure to avoid going near the town. When you set fire to the home, many of the residents become hostile.

A critical part is making sure you also don’t let your target slip away. If they get away on a horse, they’re tough to run after. We’ve had a lot of trouble trying to grab them while they were getting away on their horse, making the entire mission extremely difficult to complete.

Once you’ve acquired the gang member, you’ll receive a new location to drop them off, and Jeb should take it from there. Next, you’ll need to find another Blood Money Crime NPC to start this quest’s third and final part.

The final part of the Jeb Phelps contract has you starting in Annesburg. You begin just outside of the town on your horse, so you only need to enter the town the begin this portion of the contract.

When you arrive, the town is doesn’t appear to have anyone in it. So, you need to find Jeb Phelps to start the next portion of the quest. You can find him close to the center of town, to the right side of you when you first enter Annesburg. You cannot open it up from the front, but you have to open it from the back. You need to enter the house and walk down the hallway to start a cutscene with Jeb, where law enforcement has gathered outside.

You’ll have a brief shootout, but you want to focus on getting to your horse and riding out of town. You and Jeb will be heading to a nearby fort that a gang has taken over, where the stash is located. You and Jeb will have to clear out the area. There is an enemy with a machine right at the center, so you might want to be cautious about entering it.

Once the gang has been clear out, you’re not out of the woods yet. The law enforcement you previously lost has returned, and they surround the fort. Luckily, you can choose to hole up at the center and use the machine gun to keep them off your back. You can swap it from front to back, and you should be good to go. Jeb will take a shot during the fight, and then it’s up to you to find the stash. You’ll be able to find it underneath the stairs, inside the fort.

The final step of Jeb’s Contract is to take the stash to a nearby drop-off location. You want to lose the law first, so make sure to evacuate the area and remove your wanted level before heading there. After you’ve done that, you’ll have completed Jeb’s Contract.