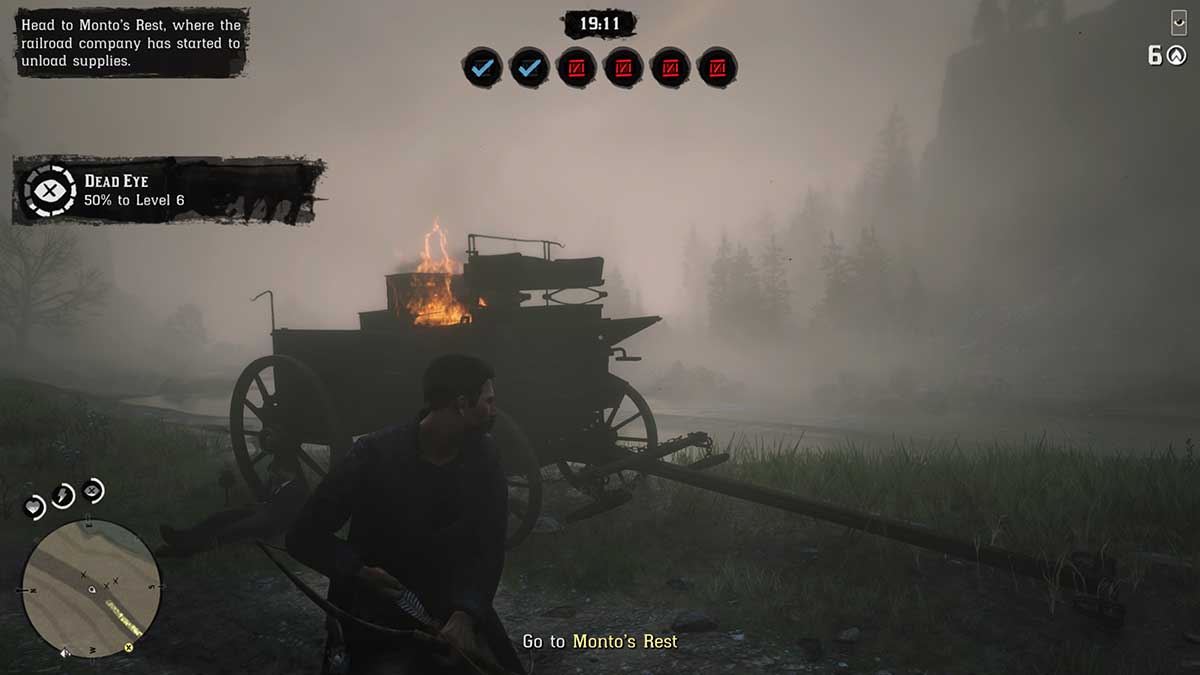 The Railroad Contract is one of the Crimes that you can pick up in Red Dead Online from any of the Blood Money vendors. There are three parts to this Contract that you’ll need to complete in order. This guide covers how to complete each part of the Contract and offers a few tips for making it as easy as possible.

The first part of The Railroad Contract is definitely the easiest. You need to find and steal a wagon from the Central Union Railroad. You’ll begin the mission with a waypoint to follow to the area where the wagon will eventually stop. There’s a single guard stationed here that you need to kill. Keep an eye out for any wolves in the area. They might jump you unexpectedly.

Once you’ve killed the guard, you’ll need to search the camp for information about the wagon’s schedule. You can find this in a note sitting on a box outside one of the tents nearby. When you’ve found it, you’ll have to remove the guard’s body. Then, pick the body up and take it to the new waypoint to dispose of it properly.

After you’ve hidden the body, you’ll be given a new waypoint to head to. Make your way there to advance the mission to the wagon’s arrival. This waypoint is a vantage point from which you’ll be able to see all the guards as they arrive with the wagon late at night.

When the wagon arrives, the guards will be assaulted by wolves. Allow the animals to soften up your enemies before opening fire. You need to steal the wagon, and while you can do this without killing the guards, it’s better to kill them all so that no one will follow you.

Once you’re certain every guard is dead, steal the wagon and take it to the new waypoint. This marks the end of the first part of this Contract. The endpoint here is another Crime vendor. If you haven’t spoken to them before, they’ll initially give you a different mission that you’ll need to complete before you can pick up and start part 2 of the Railroad Contract.

Before you start this mission, it’s best to go into it with some thrown explosives such as dynamite or flaming arrows.

The second part of this Contract sees you facing off against the Central Union Railroad once again. This time, you’re destroying their supplies. After you start the Contract, you’ll be given a waypoint to follow to two crates full of supplies that you need to destroy. A small group of guards protects them. Shoot the guards and kill them, then you need to destroy the supplies. While you can shoot them enough to destroy them, it’s better to use a thrown explosive or fire arrow to do the job instantly.

With the first two supply crates destroyed, you’ll now need to head to Monto’s Rest. There are four more crates here. As you approach, the guards won’t instantly try to kill you. Use this to your advantage to circle around to the train. There’s a crate on there which you should destroy before any of the others. If you don’t, the train will leave while you try to deal with the other crates and the guards protecting them. Destroy all four crates, and you’ll finish this part of the Contract.

For this final part of the Contract, there are no special requirements. There are two tasks for you to complete here: capture the foreman at the bridge, then capture your main target. You’ll be directed to the bridge to start with. There are some crates nearby that you can set on fire to create a distraction. However, we found that the guards were alerted to whatever we did. Thankfully, the foreman only runs away, so you can kill a few guards to carve a path and follow him.

All you need to do is hogtie the foreman and search him. He’s got a note on him telling you where your real target is. With this intel in hand, you’re given a new waypoint to visit. When you get there, though, your target is one step ahead of you. He’s heading off on a train.

Follow the train and jump onto it when you have space. Kill the guards but don’t kill your target – the one in a large brown overcoat. You need to hogtie him, throw him on your horse, then deliver him to a safehouse. A few guards will pursue you as you do this, but it’s a pretty easy ride if you wait until after the first tunnel.

Try not to jump off of the train with your target hogtied if you’re inside a tunnel. Your horse won’t follow you in, and since there’s a timer that can end the mission before you have a chance to try to race to the finish.