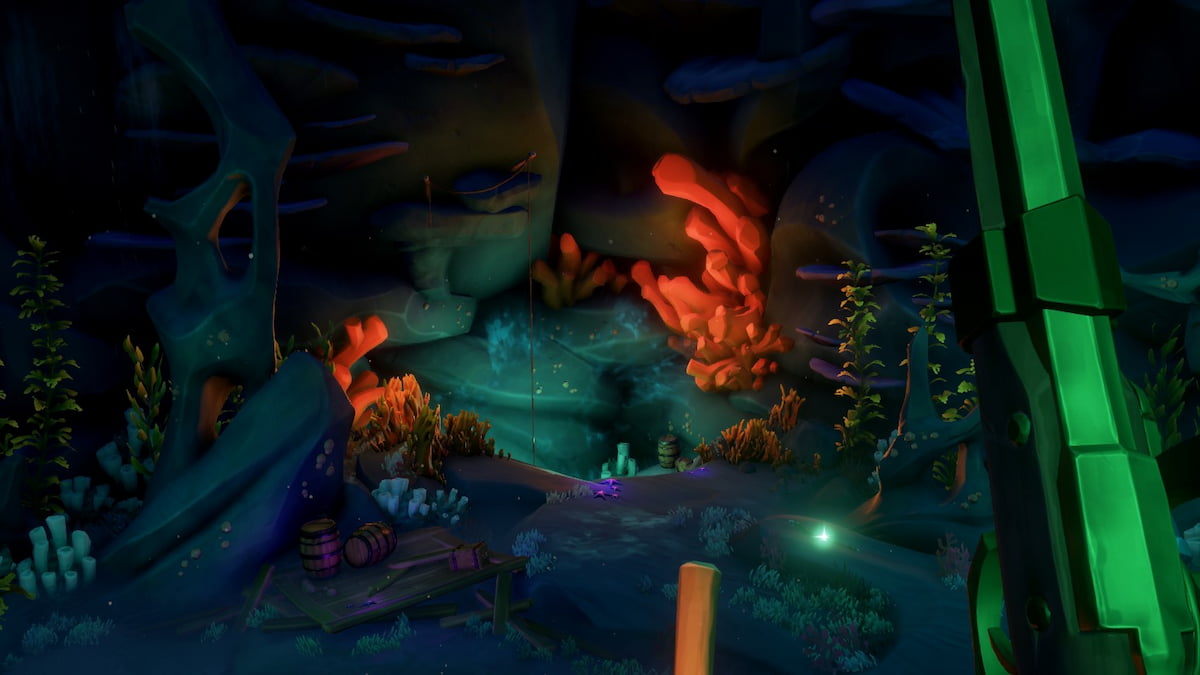 The Shrine of Ancient Tears is one of the six shrines you explore in Sea of Thieves. These shrines contain some great loot that you can take back with you to the surface, but you’re going to need to solve the many puzzles inside the temple before you can take what’s rightfully yours. In addition, you can expect to fight against several Merfolk and to keep your wits about you. You can find this temple by sailing over to the N20 grid tile and swimming straight down to the seafloor.

When you arrive at the location, use a ranged weapon to shoot the purple entrance slot to lower the barrier, allowing you to walk inside the Shrine. Continue down the path, and you’ll reach the area where you’ll find a well with a ladder leading down to the bottom.

Your goal is to exit this room, and the quickest way to do that is to take out your lantern and light the four torches in this room. They are located in the four corners. Once all four of them are lit, each of these torches has a tile on the ground that you can stand on. You need to step on all four of them quickly to open the door at the top of the stairs, proceeding to the next location.

But before you leave, you can drain the well at the center of the room to acquire the most treasure before leaving the Shrine. To do this, you need to follow the path up from the right of this location and proceed up the stairs until you find a ladder. While facing the ladder, you should be in the east direction. So go up the ladder, follow this path and jump across the purple coral to make it to the other side, where you’ll find a flight of stairs.

Proceed up the flight of stairs, and follow the pathway until you find a walled-off area with a lever. Pull the lever down, and the well will be drained, allowing you to pass to the next room. You can jump down from a nearby ledge into the wall, and hit the remaining water in the well below.

When you reach the bottom, follow the short path to an altar where there are four torches you need to light. You can do this by taking out your lantern, approaching each of them, and interacting with the wood to set them ablaze, opening the doors to the next area.

Proceed to the left, and you’ll make your way to the top and be on the other side of a wall leading back to the main chamber. Pull the lever, and you’ll have returned, with plenty of treasure on the floor available to you. Now, you can head back up to the top of the stairs and make it to the next area of the Shrine.

When you reach the room, you opened by stepping on the four tiles in the primary chamber. Inside this throne area, there are another series of four torches you need to light. Once all of them are lit, return to the large room at the door facing the well will open.

Head inside the chamber, and at the center will be four pillars each with a symbol above them. The marks are of a butterfly, a turtle, a parrot, and a crab.

In this next hallway, you’re going to open up will be for the turtle. You’re going to follow the same pattern you did for the butterfly where you need to light the torches in this hallway, except there are six now, with two hidden. Light the six visible ones, and all you have to do next is interact with the three turtle levers in this chamber. Once the levers are pulled, the two hidden torches will be revealed, hidden in a small room with two chests inside it.

The final hallway features four torches you need to light. We recommend going around the chamber to find those before looking for the levers because that’s the easiest thing to tackle. Once all four torches have been lit, the next step is to find the three levers. Two of them are hidden in the wall, which you can reveal by stepping on plates.

The best way to find where the hidden levers are is by looking at the wall and finding the crab markings. This indicates the lever locations. Once you’ve located them all, pull on the visible lever to start the timer, and then step on the nearest plates to reveal the hidden levers.

After finding the levers, you’ll return to one side of the butterfly hallway, and then you can return to the middle of the pillars to obtain all of your well-deserved treasure.