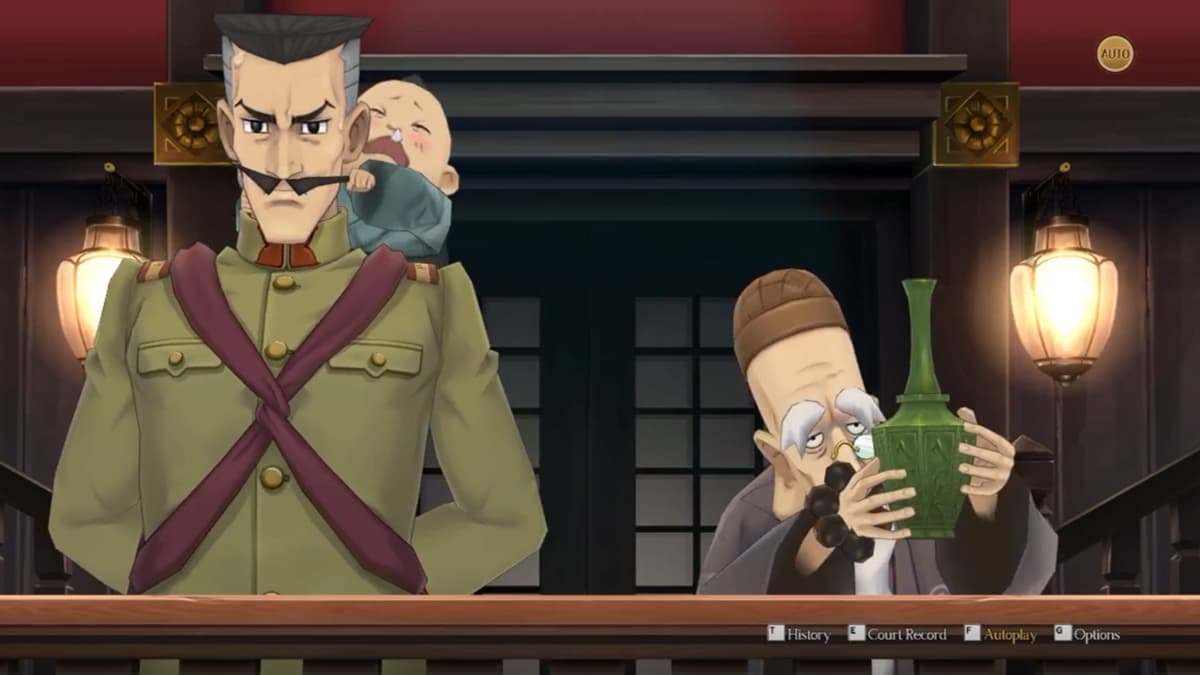 Anyone looking to get eased into The Great Ace Attorney Chronicles, you probably were not expecting to be put on trial for murder upon loading up the first episode in The Great Ace Attorney: Adventures, The Adventure of the Great Departure. Regardless, that is the situation you are thrown into after Ryunosuke is found with a gun nearby an English man shot in a restaurant. Here are all of the important things you can do to complete Trial, Part 1 in this first episode.

It doesn’t matter whether or not you say “I do” when prompted to. Either way, Ryunosuke will declare himself the Defense Attorney on the case and defend himself. Kazuma will act as your assistant.

Interject or Wait and See

When Hosonaga is on the stand, choose to Interject even though you were told not to.

Cross-examination: “What the Witness Saw”

Present Photograph of Victim to Nosa when he says, “The black-uniformed varsity cadet fired on the English civilian! And from the back, the cowardly little weasel!”

The photo shows the victim with a bullet hole in his chest, so this is a blatant lie.

Go through all of the statements, and there will be no evidence you can present to move forward. After listening to everything, Kazuma will suggest Pressing the witnesses to get more out of them.

Press Nosa when he says, “Furthermore! A visual search of the premises at the time confirmed that we were the only personnel present.”

During the following conversation, it comes out that Auchi has a Medical Report Card from the victim. Ask for it to be submitted as evidence.

Go through the testimony again, and Kazuma will teach you how to examine the evidence closely. Examine the Medical Report Card. Turn it around and click on the folded edge to open it. Click on the writing inside to find out the victim could not have been eating because he was under the effects of anesthesia.

Present Medical Report Card to Koretuka when he says, “Indeed. Alone, he was, the Englishman. Dining all by himself.

Who was eating the steak?

Since the victim could not have been eating the steak and everyone besides Ryunosuke swears there was no woman with him, who could have eaten that dinner? When the choice arrives, select An as-yet-unknown third party.

Kazuma will say that someone has made the witnesses lie about not seeing a woman at the table with the victims, but it was not Auchi. When asked by the judge who did that, choose Satoru Hosonaga.

When he demands proof, examine the Waiter’s Business Card. Flip it over and look at the text on the front. It turns out the waiter is actually a police inspector working undercover. Go through the rest of the dialogue, and this part of the story will be finished.