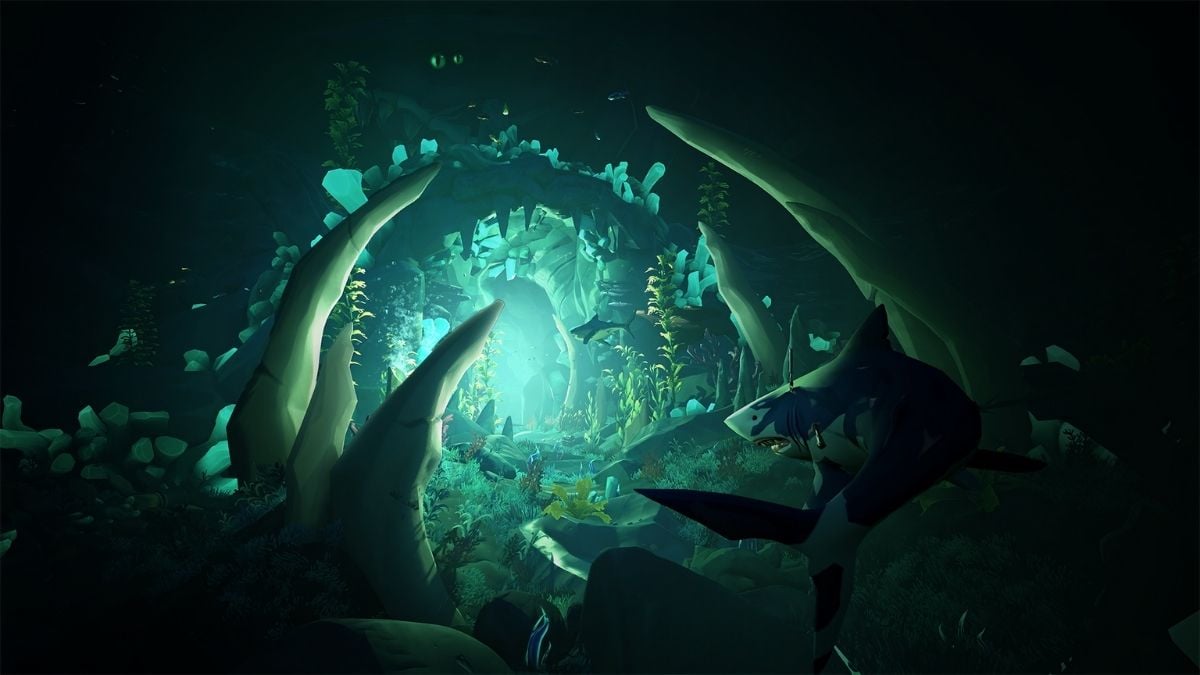 The Six Shrines of the Sunken Kingdom in Sea of Thieves are fantastic treasure troves abandoned by the sirens. The Shrine of Hungering in particular is not only filled with sharks and frustrating puzzles, but also a wonder of culture, stories, and archaeological finds.

Where in the ocean?

After you jump in the water, look for a corridor made out of skeletal ribcages that lead to a large, toothy cavern entrance. Inside that cave will be a handful of sharks to defeat and undersea vents to refill your oxygen meter. Before you reach the first puzzle, though, look for a skeleton among some seaweed: they will be holding a journal page called “1. Shrine of Hungering.”

Swimming up to the next platform, you will find a new chamber with a geyser in it. Use the geyser as a transportation tool to get to your next puzzle. Like the last puzzle, there is a mural to the East that gives you the clues you need. All the statues this time should be to the left of the mural. The gem should have a lowered arm, the coral should be middling, and the chain should be high. Then, to submit your answers hit the siren statue above you and to the Southwest. If you did it right, the water levels should rise again. Before you leave, though, don’t forget to grab a journal called “2. The Warrior” tucked away in an ammo chest next to the gem siren statue.

Top of the shrine

The second you reach the top, coral skeletons will fight you. After that, walk across a Kraken spine to the mast beam. Past the beam, there’s a pile of wooden planks that will hold the third journal, “3. The Warrior – Unmasked.” You’ll find more coral skeletons and another journal “4. The High Preist” at the base of a new siren statue.

Near the Megalodon jawbone, there will be a coral orb that you have to hit to pass through the siren window in the Megaladon’s mouth. That will lead you to a small tunnel and another siren window. Around this window will be the final journal, “5. A Great Evil.”

After you finish collecting journal pieces, swim through the siren window and finish your adventure in a cramped chamber stuffed with sharks and treasure. You can store all your treasure in the Sunken Merfolk Statue and leave that way too. The treasure that might be the most important though, is the Breath of the Sea. However, it will only spawn here if you are on an active coral message in a bottle mission that leads you to this shrine.