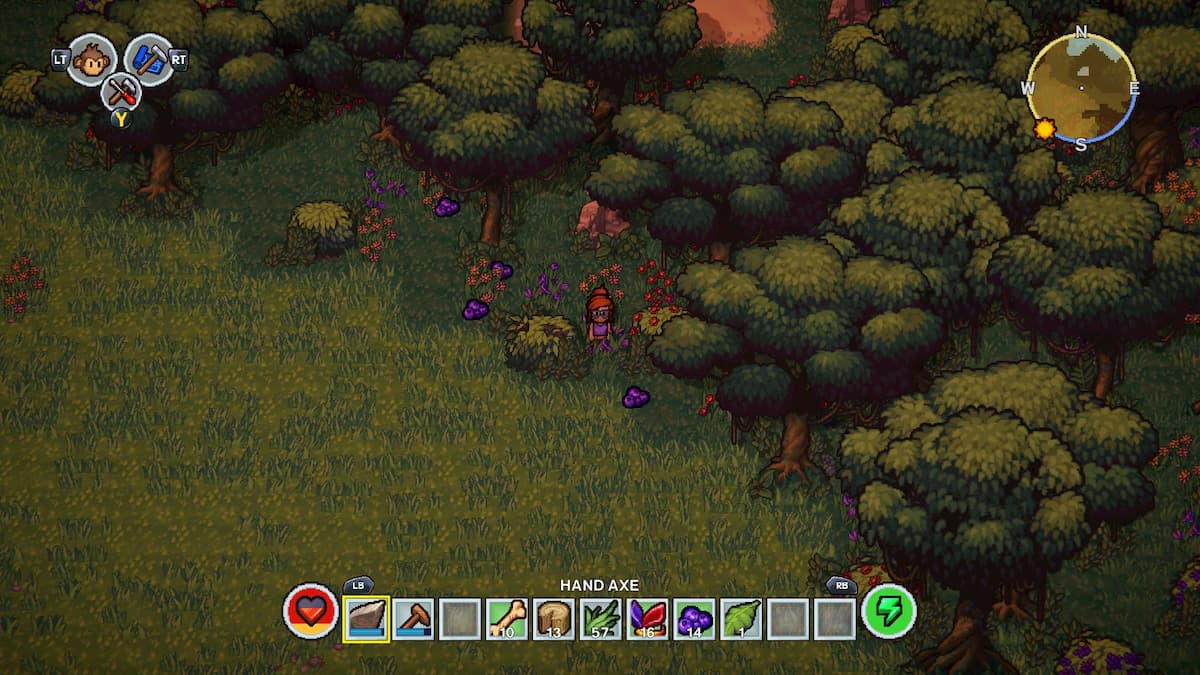 Food is a necessity in survival games, and The Survivalists is not an exception. The game starts with the player on a beach with no tools and limited supplies. Hunger can be satisfied in the early stages with berries and coconuts. More filling options with other perks become available as the player progresses through the game.

Finding food is a challenge when just starting out. The berries in the raft only last so long. Hunger drops quickly. You may lose all your items if you’re unlucky enough to succumb to starvation while foraging for food.

There are multiple types of food in the Survivalists: berries, coconuts, fruit, fish, and meat and animal parts. Berries, coconuts, and fruit slightly fill the hunger. Meat is harder to come by and must be cooked over a fire.

Berries are easy to find. The raft on the beach contains a handful of berries to help you start out. There are also berry bushes on the same grassy part of the beach. Berries are found on berry bushes. These bushes are easily identified by the purple berries on them instead of flowers. Berries sometimes are found on the forest floor. You get a decent amount of berries per bush, but they do not offer much in terms of hunger.

Berries can be combined with coconuts or petals to make smoothies or monkey food at the campfire. Smoothies will fill your hunger and health more than just the berries and are easy to make.

Coconuts are easier to find than berries but are less plentiful. The palm trees on the beach sometimes have coconuts on them. The ones with visible coconuts will drop several when chopped down. Like the berries, they don’t fill much hunger but will help in a pinch.

Coconuts are also used to make smoothies and other meals to help restore hunger and health.

Fish meat is hard to obtain. It may take you a long time to get fish if you rely on blueprints alone. Fish can be hunted with a spear, which can be found from fallen enemies, bought from the Mysterious Shop, found in skeletons, or crafted. If you get lucky enough to find a spear, you can hunt fish right away. If you are not lucky enough, you will need to craft it, which requires metal. Metal is found in volcanic regions and is dangerous to get.

Fruit is a rarer food item that can be purchased at the Mysterious Shop. Enemies may drop fruit upon defeat. We have found them from Orcling hideouts and barrels, and in the Mysterious Shop for a small amount of money. Fruit can be found on trees in swamp biomes. Cut the trees down to gather the fruit because it is in the swamp biome that requires an elixir to endure, it’s not worth pursuing it in the early game.

Fruit is also used to make other food items but fills hunger better than berries and coconuts.

Meat is a harder substance to obtain. You have to either fend off an aggressive animal or trap small animals to obtain meat. There are meat scraps and hearty meat chunks. Small animals drop scraps, bigger animals drop both scraps and chunks, dangerous predators may drop steak. All three types must be cooked at a campfire or cooking pot before they can be eaten. Alone, scraps and chunks make kabobs that refill a decent portion of hunger and health. Meat chunks can be combined in other recipes for more health or stamina. Steaks offer the best stat boost.

You will need some monkey help dealing with the bigger animals that will fight back. Place traps for smaller animals, walk away for a little while and check on it regularly. Meat and fur will appear in the trap the next day.

Some animal parts can be cooked. For example, Bats drop bat wings after defeat, which can be cooked at the campfire and made into a small meal.