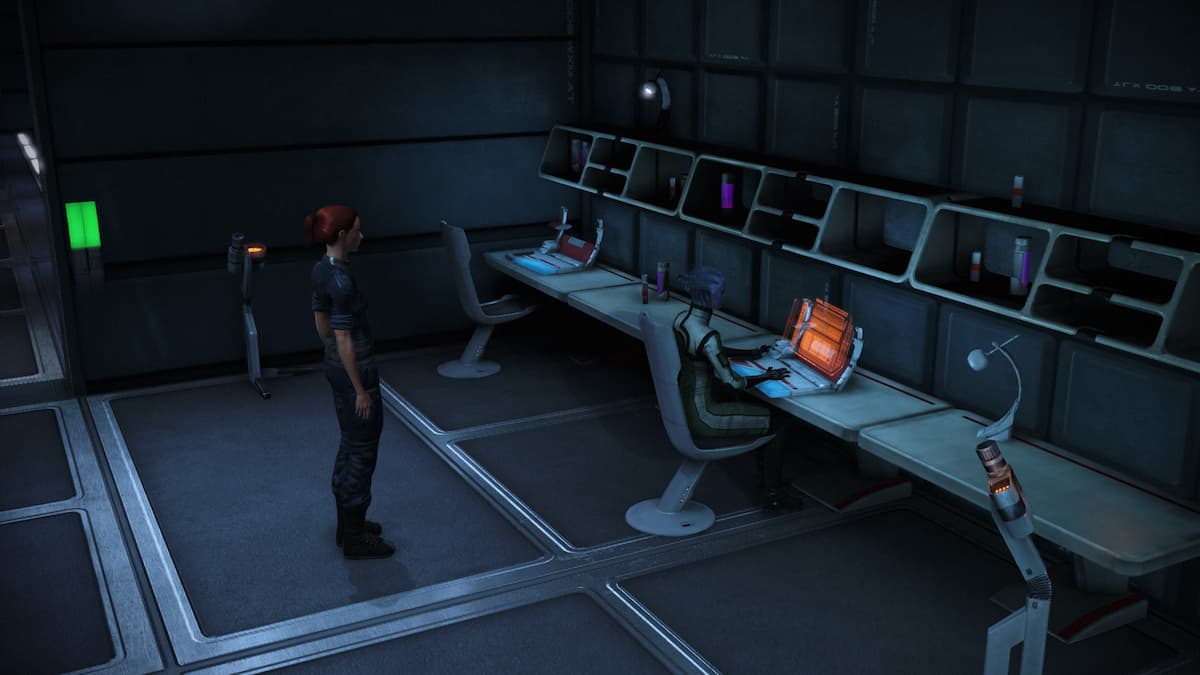 The final character you recruit to join your team in Mass Effect Legendary Edition is Liara T’soni, a scientist operating in the Artemis Tau sector. She’s working on a Prothean dig site, attempting to uncover more secrets behind the ancient race, and she’s become a target of the Geth. It’s your job to locate her in that sector and get to her before the Geth abduct her.

How to find Liara T’Soni

When you land on Therum, the Prothean ruins are on the far side of the canyon. Luckily, the progression through the planet is a straight shot, but the Geth did arrive before you did. You’ll have to find through many of them with your Mako.

Right before you reach the Refinery, a pair of Geth Armatures will land in front of you from a dropship. You’ll need to eliminate those two before nearing the Refinery. However, several turrets are blocking your path, and your teammates suggest you take an alternative route, which you can move through with your Mako on the right side before entering the Refinery area. Rather than a trio of turrets, there will be a single turret when you go down the right route.

When you reach the Refinery, the area will be littered with Geth. You’ll be fighting a Geth Juggernaut, Destroyers, Rockets, the regular troopers, and Geth Shock Troopers. You can choose to eliminate them from the seat of your Mako, or take them out on foot. By leaving your Mako and fighting them on foot, you do gain more experience points.

Once you’ve cleared the area from all Geth threats outside the complex, you need to enter the compound and find the terminal to open the gate preventing you from advancing. It will be in the building on the left side, and there will be a small amount of Geth protecting it. After you’ve used the terminal, you can return to your Mako and advance.

The pathway will remain linear for this portion of the mission. You’ll be stopped by a handful of Geth Armatures along the way, and you can choose to step out of your Mako before finishing them off to gain the most XP. Near the end of the pathway, closer to the tunnel, there will be a Geth Colossus, a larger Armature version. It’s bigger than the Armature in every way by having more health, shields and can output more damage. Beyond these differences, it’s pretty much the same, and you can blast through it similarly to any other Geth you’ve fought so far.

When you reach the very end of this map, a smaller area opens up, and you’ll have to leave the Mako behind. You can only continue on foot, and you can expect plenty of Geth opposition along the way. We highly recommend you save at this point.

The next area is entirely on foot, and there are plenty of Geth to battle. You’ll be fighting them throughout your progress through this area, so make sure to save beforehand, or you will have to begin the area over again.

Before you reach the entrance to the excavation site, a Geth Armature will appear, and you’ll have to battle it on foot. It’ll have plenty of Geth Troopers and Stalkers backing it up, proving to be a difficult battle. During this fight, you’ll want to focus on the smaller enemies. Whenever you can during the fight, try to use a character who has Overload on the Armature’s shields, and try to whittle them down before hammering them with all of your firepower.

In the tower behind the Armature is a sniper. You’ll want to eliminate that first because it’s extremely effective at taking out your allies.

Now that the Geth threat outside has been taken care of, you can enter the excavation site and retrieve Liara. There are still more Geth inside here, but not as many as there were outside. When you reach the first area, take the elevator down, and eliminate the trio of Geth drones waiting for you.

When you take the second elevator down, it breaks down right as you reach the bottom, and then you can step off onto a broken platform. Follow this path, and you’ll find Liara. She used a Prothean security device to protect herself from the Geth assault but is now trapped. You’ll have to find a way to get past the barrier to help her.

How to get past the barrier

The way to get past the barrier is behind you, in the same area. When you turn around, there are several Geth waiting for you. After defeating the Geth, you won’t have to go too far. There’s a terminal just below the stairwell where you can enter the Mining Laser Controls and turn it on. The code wants you to input an override sequence. This is the sequence.

After you input this sequence, the mining laser will burrow underneath Liara, and you’ll be to get to her. When attempting the escape through the elevator, the Krogan Liara warned you about arrives with his Geth. You’ll have to defeat them before leaving. We recommend focusing on the Krogan before handling the Geth.

Once you complete this portion, you’ll be able to take Liara to the ship, and she will join your crew.