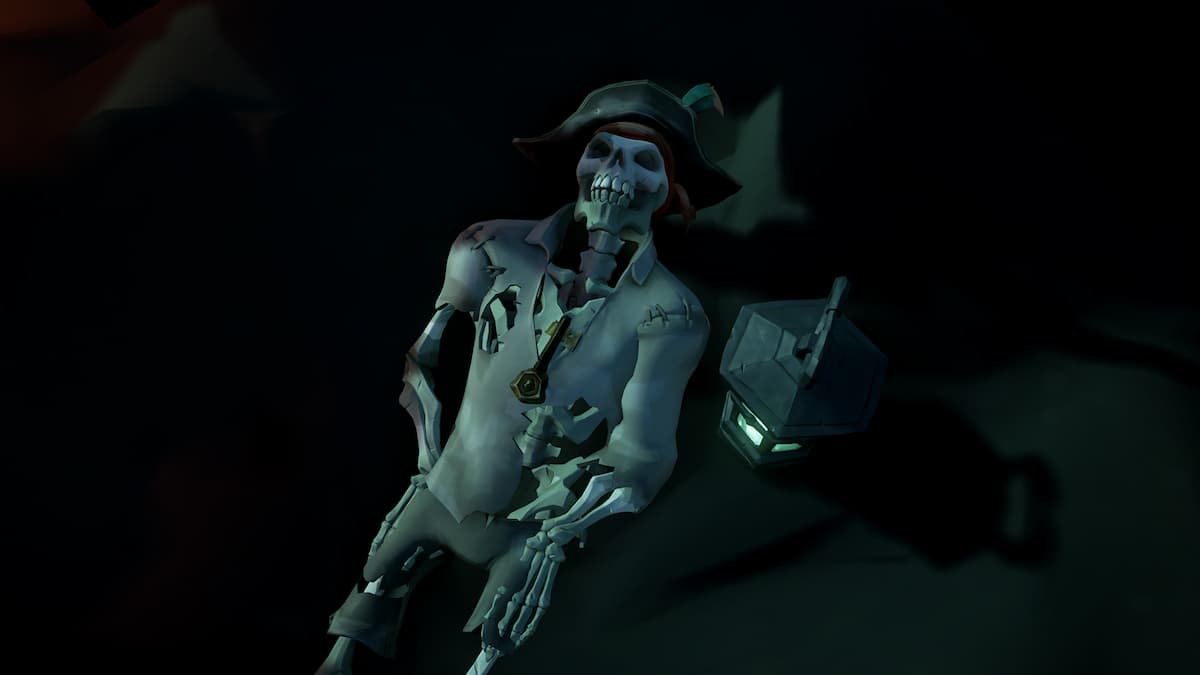 Before you finish up your little quest with the Cursed Captain in the first Sea of Thieves: A Pirate’s Life Tall Tale, you can embark on a number of side quests. One such involves a long-deceased pirate named Poor Dougie, who has been wronged and separated from his precious treasure. This will be quite the tangent, but it will begin a series of fun little tasks that will result in a number of Commendations.

First, head to the tavern, where you obtained the cage key for the Cursed Captain. Keep going up the ramps at the back of the tavern to find a map in the captain’s quarters. Light the white candle with your lantern and witness a trio of ghost pirates appear and point at a red X on the map. This X leads to an area near the back of the Golden Hare, the Cursed Captain’s ship with red sails.

Look for a trail of gold pieces, and follow it all the way to under a dock near the lighthouse. There is a shovel, an open chest, and an unfinished hole. Keep digging up that hole with your shovel, and you’ll find the skeleton of Poor Dougie. Bring him back to life by lighting the lantern next to him, and he’ll explain his predicament to you. You will receive the Raising the Dead commendation for doing this.

The first step of finding his lost treasure is by going back to the shipwreck that is split in half; go to the side of the ship that has the bow leading to a broken hull and cave. There is a wooden path leading to a door that lets you enter the boat, and inside is a skeleton on a bed wearing pajamas. Go up a flight of stairs and back outside; there will be three lanterns for you to light up.

Go back to the room with the bed and activate a pulley near the door to move the curtains and let the green light in. The scene will become livelier, and you can approach the skeleton and move its arm. This will make it point out a location on a map with a magnifying glass.

Upon close inspection, the X on this map is in front of the tavern. Go back out, and start digging in the area in front of the tavern’s entrance; blue plants should be directly to your right, and a wooden path to the skeletons playing chess should be on your left. Try all spots around here until you hear a clunk — you’ve found the treasure chest, but Poor Dougie is the one who has to open it.

Take the chest to him and he’ll give you the key to open the chest — inside is Poor Dougie’s Medallion. Leave the chest with the medallion in the room with the skeletons playing chess, as you’ll need that medallion later.