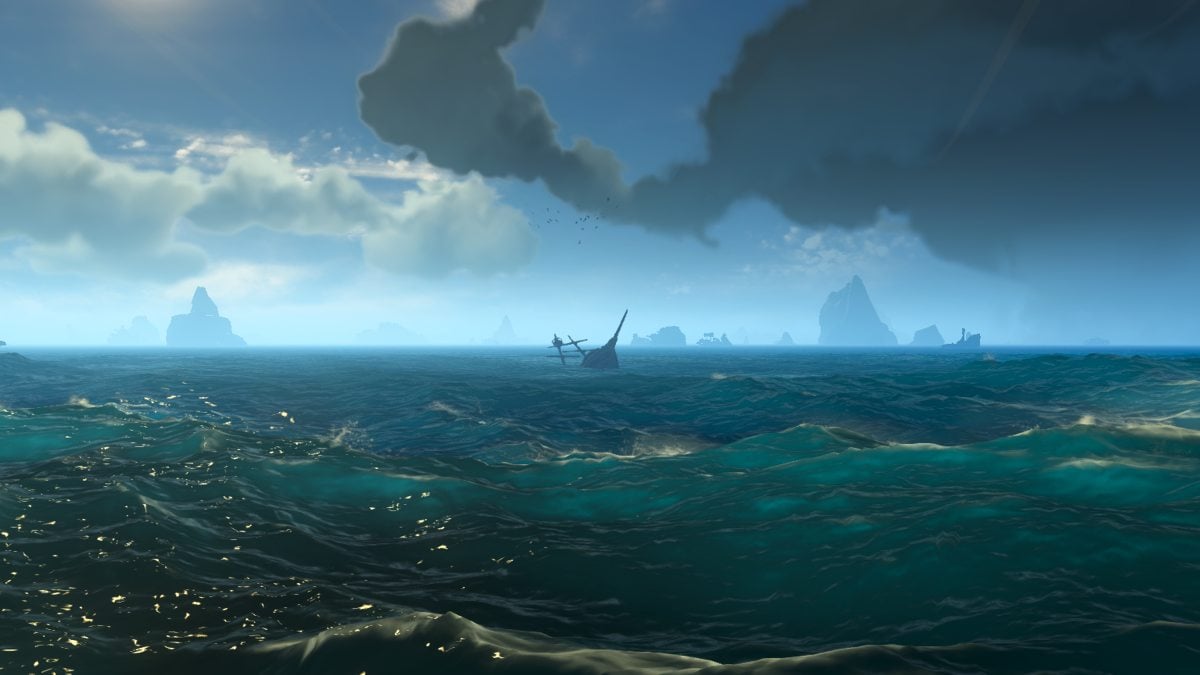 With the numerous islands scattered across the Sea of Thieves, players will likely stumble upon the occasional Shipwreck or two. These sunken vessels often contain high-value loot, whether it be Bounty Skulls, Mermaid Gems, or Kraken meat. Though you will usually find Shiprwecks by chance since they’re not in set spawns, there are ways to go about searching for them if you seek easy plunder.

The most immediate way of identifying a Shipwreck is the wreckage itself. This may sound simple enough, but you might miss the occasional mast, bow, or stern of a Shipwreck sticking out of the water if you’re not actively looking for them. Keep in mind that if you have a Galleon crew on deck scanning the horizon for wreckage alone, you’ll only spot those Shipwrecks that have wreckage sticking out of the water. The Shipwrecks completely below the water will still elude you.

The most tried way of finding any Shipwreck, either below or above the waterline, is by scanning just above the horizon for flocks of Seagulls. Large flocks circle above all Shipwrecks, so you don’t have to rely on wreckage alone to find one.

That said, there are a couple of drawbacks. Small flocks of Seagulls also fly above Barrels of Plenty floating on the water throughout the Sea of Thieves, so you may think you’ve found a sunken Shipwreck until you get closer. Flocks of Seagulls are also not the easiest to see, especially at night. If you’re very far away, they may appear as small black dots, so keep a weather eye on the horizon.

Reaper’s Bounties and Reaper’s Chests are treasures that can be sold to The Servant of the Flame. They can randomly spawn in Shipwrecks, and they’re cursed with the Reaper’s Mark, meaning their location is trackable on the Map Table. The Reaper’s Chest appears as a red skull encased in black on the Map Table, while the Reaper’s Bounty appears as a golden skull incased in black. If either is on your Map, you can tell if they’re still at the Shipwreck by seeing if the Reaper’s Mark moves or by looking for a bright, swirling light on the horizon in that direction. If the lights are there, sail toward them. Be warned: you could encounter hostile players at the Shipwreck.

Gold lights represent a Reaper’s Bounty still at a Shipwreck:

Red and green lights represent a Reaper’s Chest still at a Shipwreck:

While Shipwrecks have random spawns, their names are pulled from a preset list. If you get close to a Shipwreck and one of these names pops up as a title card, you can be certain that you’ve found a Shipwreck:

Unnamed wrecks can also be found in The Seabound Soul.