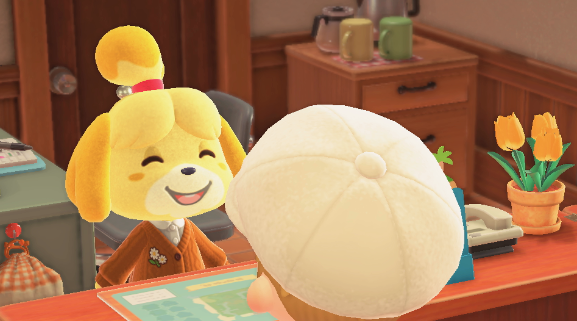 Isabelle is one of Animal Crossing’s most beloved characters, which is surprising considering she only just recently appeared in New Leaf for 3DS eight years ago.

Since then, she has been one of the game’s stars and has even appeared as a playable fighter in Super Smash Bros. Ultimate. Thankfully, she also returns in Animal Crossing: New Horizons and can be unlocked on your island as you progress through the game.

But how on earth do you get Animal Crossing’s adorable assistant onto your Island? Let us explain.

Isabelle will automatically join your island once the Resident Services upgrades from a Tent to a building. When the upgrade has gone through, a small cutscene will play in the morning that will introduce Isabelle to your town. She will be handling Island activities as well as becoming the new morning announcer. She will also allow you to change your Town Tune and Flag in the Resident Service building.

To get the upgrade, you need to have the Museum, Nook’s Cranny, and five Residents settled in your town. Note that just completing the building work and having plots on your Island sold will count as a Resident moving in, there need to be five houses on your island filled with NPC villagers for this checkmark to be ticked.

It takes a lot of work, and even if you do everything perfectly day by day, it’ll still take you over a week to unlock everything and get everything built and setup if you do it normally. Of course, you can always time travel, but do you want to cheat?

The choice is yours, but prepare to be in for the long haul.